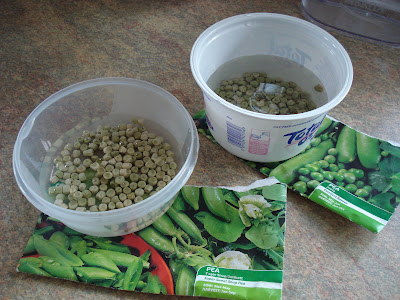 I'm having a spot of difficulty germinating my peas this year. So I'm taking a tip from my Mum and Frugal Queen and sprouting them first. Instead of eating the sprouts though I will be planting them. We'll see how it goes.
The Challenge went to pot last week as I admitted and Spotty Jug got NO pennies this morning. However, we had a brilliant weekend with lots of jobs done, the main one being moving the Mummy pigs to the other, more grassy, side of the paddock. We re-configured the electric fencing and managed to make a whole big area for the Kune Kunes to join them. Today they are all making friends through the fence, obviously being very careful not to touch it with their noses. There is still some more work to be done but Lovely Hubby will be off work tomorrow and will be able to complete the job.
Liz, the Large Black was supposed to be Jack's 'wife' for the next six weeks but Maud decided otherwise and was quite literally batting her eyelashes at him through the fence. So we let her have her way and she was led through to the orchard. Ten minutes after eating their tea together the 'deed was done' and there will hopefully be the pitter, patter of lots of little trotters in three months, three weeks and three days.
I'm off now to make a pie or two.
Sue xx
Posted by Sue at 12:17