Anniversary, Christmas ... and The End of an Era 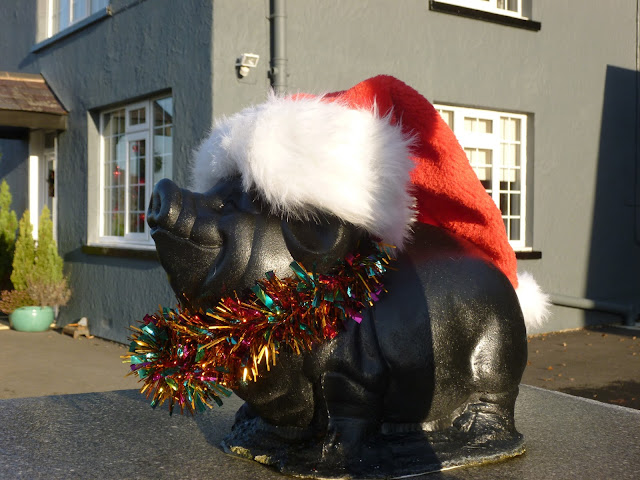 It was our ninth wedding anniversary yesterday and we made the celebrations last the entire weekend.

On Friday we took Suky and Mavis to the groomers and whilst they were washed, dried, snipped and titivated and made to look even prettier than they normally are, we treated ourselves to a coffee.  Later on in the evening we went to the cinema to see Allied, a surprisingly good film, even better than the trailer had led us to expect.. 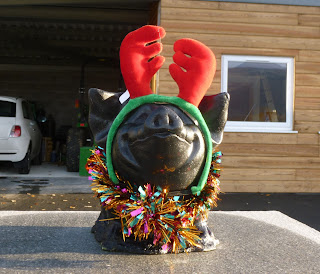 On Saturday morning we opened our Sealed Pot and after years of using the money to do various Challenges this year we decided that the money was ours to do with as we wanted.  So we went to the bank to pay the bags and bags of loose change into our account and then hit the shops.  I bought myself a new dress and two pairs of shoes, and Lovely Hubby bought himself a power tool and it's accessories.

We ended Saturday with a meal out, something we have not done that often this year, so it was a treat to put on my new dress and dine at our leisure ...slightly too much wine may have been consumed  ;-)

On Sunday morning after a much more leisurely breakfast than usual we gave the house a good clean  and then put up the Christmas decorations.  We don't go mad, indeed each year we seem to streamline the decorations a little bit more. The ones we didn't use have been bagged up and will be dropped off at the charity shop later today while they still have time to sell them this year.

As you can see from these photos, the little black piggies on the gateposts have got their Christmas finery on too :-) 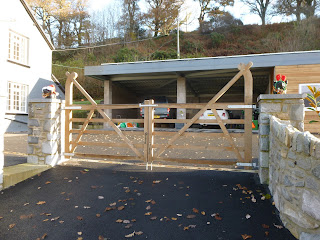 And this is where I have decided to share our lives for the last time.

Since January 2009 you have journeyed along with us as we moved from town to country.  You've been with us through the trials and tribulations of learning to look after chickens and pigs and as I learnt to grow enough vegetables to feed us and to preserve them in lots of ways to see us through the leaner months of Winter.  You have laughed along with our messy adventures and cried along with our losses ... feathered, furry and family .... you've been true friends in every sense of the word.  But, after much deliberation I think that now is the right time to claim back privacy for ourselves, and to close the gates on our lives in this public domain for the last time.

Thank you for being there, for being you, for the comments, the emails and the visits.  Thank you for following along throughout the last almost eight years.  I will still be around in blogland, and will leave this blog as it stands now for those of you who use it to link to the other blogs on my sidebar, although I will change the photo after this post has been live for a week.  This is not totally the end of my involvement with blogland as I will still drop by and comment on those blogs that I read regularly and follow, and hopefully keep in touch in a more low key way with my blogging buddies.   I hope you all have a wonderfully happy and peaceful Christmas and a calm and happy New Year.

We all have so much to look forward to.

With much love from
Sue and Lovely Hubby xx
&
Rosy, Suky, Mavis, Ginger
and The Feathered Flock 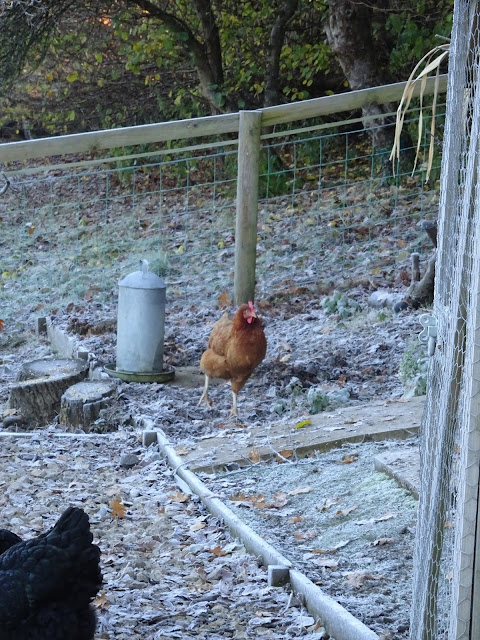 I've been a bit of an intermittent blogger this week, sorry but I've been busy just keeping things going.

Busy with just the day to day of living,  of visiting family, of family visiting me ... but mostly trying to keep things thawed out so that the things that have to live outdoors on our property have water to drink.  By things I mean our chickens, the resident sheep and the wild birds ... thank goodness that for now we have no other animal demands. 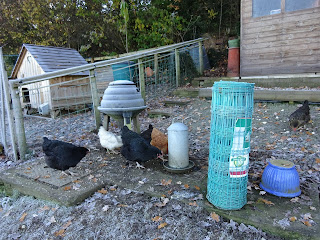 It's been so cold that I have needed to go over to the drinkers during the course of the day to refill them with warm water as once again they have iced up after the mornings defrosting.  I  keep a watering can near the house and fill it from the hot tap so that each time I let the dogs out for a toilet break I can check that everyone has thawed water available to drink. 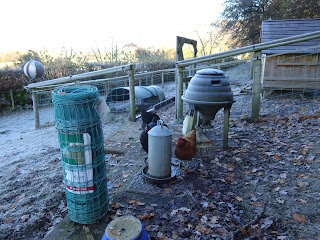 They appreciate it, and drink their fill while the water is still warm.

Someone asked me the other day if chickens drink a lot of water, and the answer is yes.  Eggs are composed of lots of water and the laying girls especially need to drink even more than they need to eat, but all of them appreciate some warming water on these cold and frosty days.

Yesterday when we got back from Mum's with my younger son Jason, everything was green again.  All nicely thawed out,  the sheep were making the most of having lots of grass to nibble at and I went to bed thinking that I would have a morning off from the hot water rounds,  but this morning the hard white frost was back and once again it was -3 inside the polytunnel and no doubt a degree or so colder outside, so I donned scarves, extra socks and gloves and did the rounds.

Now it's time to do the rounds again before me and Jason head for an afternoon at the cinema, not a bad way to spend a frosty December day, it's a good way to keep me going   :-)