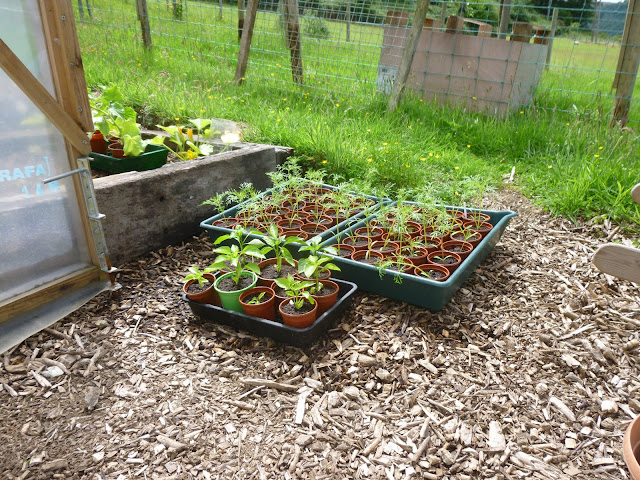 This year for the first time I've been selling flower plants at the car boot sales we've had a stall at, as well as the vegetable plants that I've been selling for a few years, and they've been really popular.  It's been a good way to use up some of the seeds that I've gotten free on magazines and from my seed stash.  This Saturdays big sellers were these Cosmos plants, (the photo was taken over a week ago ... they were much bigger and chunkier by Saturday) ... 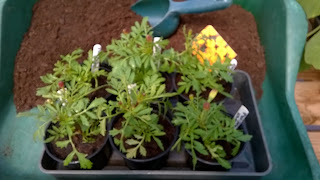 ... and the French Marigolds that I picked up from Tesco for 20p.

I only made £14 selling them at 50p each, but it was money we wouldn't have otherwise had and it all helps the food and plants fund.  I also sold the last cucumber plant for a pound, they have sold really well this year.  I'm keeping records of what I sell and when I sell them so I can hopefully do the same or even better next year. 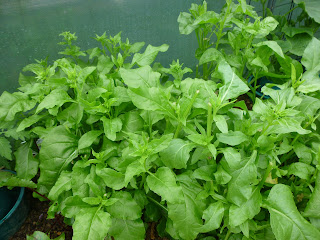 Over in the polytunnel the spinach plants from last year have irrevocably gone to seed, so the lucky chickens have been getting one plant each day to have a good peck at.  I hang it on the big hook on the henhouse and they gather round to attack the leaves, they love it.  Luckily this years spinach crop is already big and in daily use, so there's been no gap in spinach availability for us. 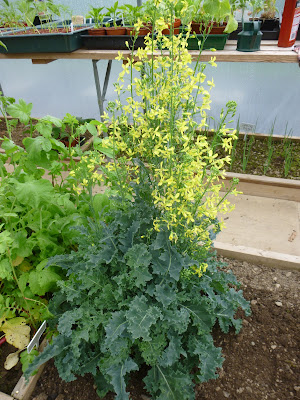 They also got this wonderful specimen to eat last week ...I'm good to those chickens  :-)

It's a Kale plant from two years ago, the flowers had been attracting bees and pollinating insects into the tunnel for a couple of weeks, and it's cheerful yellow flowers made me smile every time I stepped in.  It was finally a sight for sore eyes, with all the flowers dropping off and the leaves lacy and browning ... and as I needed the space it was in for more salad crops the chickens were welcome to have a final peck at what was left before it went to the great compost heap in the sky.

The car boot sale on Saturday was a real success, this time we had lots of books and bitty bits which I thought would limit the money we could take so I was amazed when I counted the takings when we got home ... doubly amazed that when added up the takings on 'housey' stuff was exactly £100 ... we couldn't do that again if we tried!  With £14 on plant sales and another £4 on eggs (we only took four boxes), it made a grand total of £118, not a bad mornings work.

Now it's time to carry on sorting through the house ready for the July sales, and I've already potted on the Ox Eye Daisies that I hope to take with us next time.