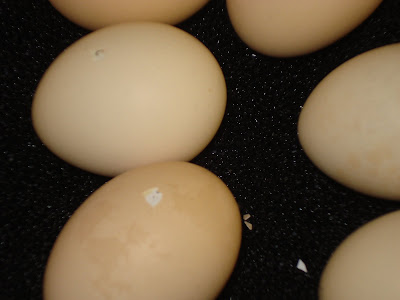 After our success hatching the first lot of Lavender Pekin Bantam chicks in November last year we decided recently that it was time to get our next little brood going. Well last night the first little cracks started to appear in the eggs. 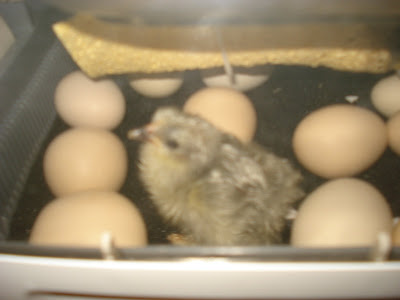 By 6 o'clock this morning this little chick was nearly all fluffed up, about an hour old and waiting patiently for the first sight of Mum. I gave her a little cuddle and then popped her back to keep warm while her brothers and sisters made their way into the world.

I've just checked again it's 9 o'clock now and she's not on her own anymore, she's been joined by a little damp bundle who's completely exhausted after her struggle out of the shell. Bantam shells are quite tough and I do feel for the little chicks who struggle so valiantly into the world.

I'll pop back later with an update.

As promised - it is now 5.20pm and I'm back with an update. We have five little chicks. The three that hatched first have been moved to the 'nursery box' under the warmth of the heat lamp, chick number four is still in the incubator drying out and chick number five.....I watched her being born, kicking her way out of the egg and lying exhausted watching me with tired little eyes when I went to get the info for this update. These two will stay together for a while before being moved, there are two more in the early stages of pecking their way out, so we are doing well up to now.

On a different note - an update on my Below the Line challenge, it was due to start on Monday of next week, but as we are nipping up to Scotland to visit my lovely Mum in Law on Friday of next week, I have decided to bring it forward by a day. So I will be starting the five day challenge to live for '£1 a day for 5 days' on Sunday. The Blog will be devoted to meal plans and budget shopping for the whole of th 5 days, I hope you will pop by.

To sponsor me use the link at the top of my sidebar, it will take you straight to my personal fundraising page. Every penny counts, so don't be embarrassed to sponsor me for 50p or any amount you choose. Thank you.