The Unveiling of a Tribute 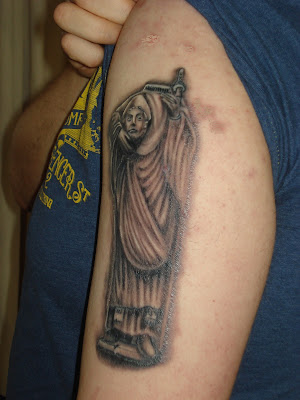 Thanks for all the lovely comments on the Blog while I've been away, it's been nice to sit and read them now I'm back.

While I was in Manchester, my younger son, Jason came to see us (he lives in Preston), to reveal his tribute to his Grandad.

After a bit of research he had found his Grandad's name Sydney, originated from Saint Denis, a martyred saint that was beheaded during the persecution of Christians and yet marched on with his head under his arm preaching for another 6 miles.

One of the original statues of St Denis (pronounced Di-nee).

After asking around he managed to find a highly recommended tattooist who could put his ideas into action and translate the image from the photo of the statue onto his arm.  He has always wanted a tattoo (possibly since I had mine done)  but did not want something just run of the mill, he wanted something really unique.  After careful consideration he went ahead with his plan, and, spread over two weeks this brilliant artwork took shape.

It's not quite fully healed yet but you can see already how well the tattooist has captured the image.  A wonderful tribute to his Grandad and a very original tattoo.