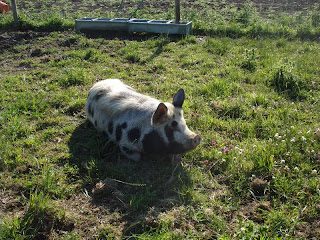 Last night we had both had our baths are were just getting into bed when Rosy , the Jack Russell started barking, seriously barking, the reason.......there was a pig at the door!! 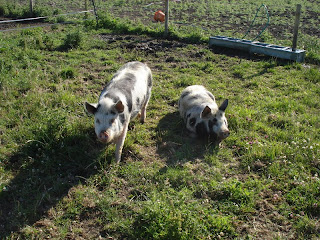 We don't know what had been going on in Kune Kune world, but Gypsey was outside the house letting us know in no uncertain terms that she wanted to go home.
We grabbed a bucket of pig nuts and led her up the track around the paddock to the gate at the far end and she trotted happily over to Tinka who was also on the wrong side of the electric fence, the only one in the right place was Tayla, patiently waiting for her sisters to join her and retire to bed. 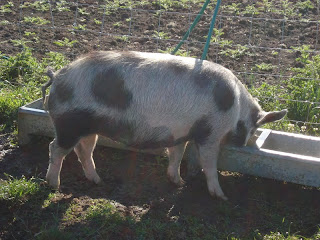 After a bit of persuading (pigs don't like to cross even a lying down electric fence) we managed to get them all in the right place and switch the fence back on.  What had happened to make two of them get to the wrong side of a live electric fence, and Gypsey to be able to get out of a fenced and gated field we'll never know.
But we do know we have a very clever little piggy who came to tell Mummy and Daddy when she wanted to go home.
Sue xx
Posted by Sue at 21:39