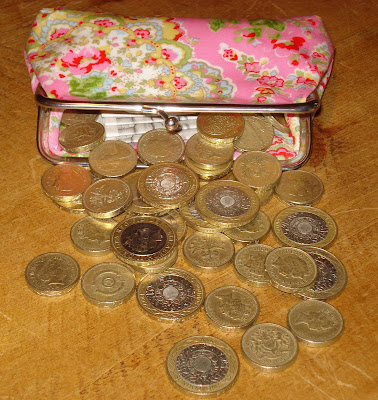 ~
The £100 Self Sufficiency Challenge starts today.  I shopped in supermarkets for some basics yesterday, so we have some stores to help us on our way.
~ 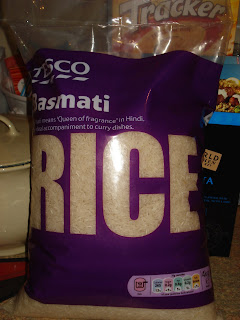 ~
We have a rather large bag of Basmati rice - five kilos of rice to be exact, it was on offer in Mr Tesco so I thought WOW that should keep us going for while.  Although we both like brown rice, Basmati is brilliant with curries and will also be useful in the rice salad that we will be able to make with all the salad crops that we have coming through at the moment.
~ 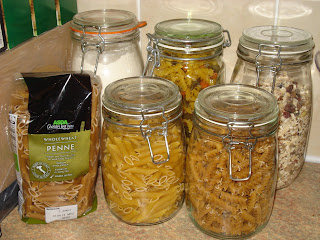 ~
We also have quite a bit of pasta already in store, in the form of different shapes and also a jar (not pictured) of wholewheat spagetti, which we both love.  The pasta is also ideal for salads as well as the more usual pasta dishes.
~ 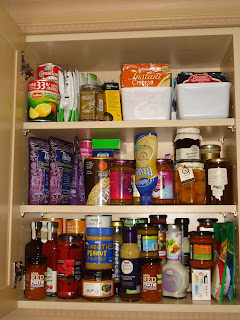 ~
This cupboard shows the last of our 'bought in' sauces and dressings and some sachets of instant mixes that I got from Approved Foods.  I also have a couple of bags of their Scone Mix, Cake Mix and Pastry Mix, so quick meals and goodies can be rustled up.
~ 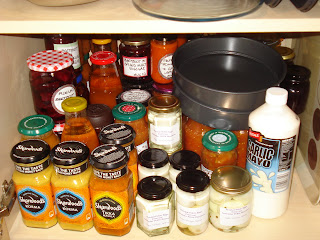 ~
This is the last of the bottled stuff from last year as well as a couple of jars of curry sauces that I got when they were on special offer, and at the front quite hard to make out, our new line of 'Pickled Pekin Eggs'.  Waiting to be sampled to see if they are good enough to take to the Farmers Markets.  (You have to wait two weeks to eat after pickling them to get the best taste.)
~ 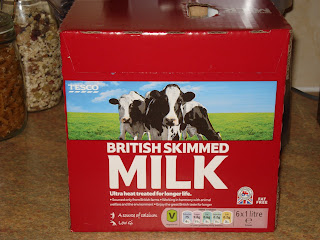 ~
And finally the only other thing that I have purposely stocked up on, (I usually only buy two cartons at a time), six cartons of long life milk to be used to make our own yogurts, when the bought ones we have in the fridge run out.
~
I have made an effort not to stockpile things the essence of this Challenge is to see how self sufficient we can be over the next few months with produce from the farm, so it would have defeated the object to have bought in loads of things.  I have one four litre bottle of milk spare and one on the go, Two packs of butter spare at the back of the fridge and a final selection of bought in salad veggies (2 cucumbers, 4 peppers, half a bunch of spring onions and a pack of mushrooms) after they run out it is up to me to grow replacements and all the other veggies we need to eat.  There is half a bag of mixed veg and half a bag of frozen peas in the freezer as well as the crops that we froze last year, but the cabbages are growing extremely well and my spring onions are almost big enough to pick.
~
I'll post an update each Monday on how much we have spent during the previous week and during the Challenge I'll try and post about the meals we eat with the produce we grow and any ideas  I think of to make our £100 last longer.
~
Here we go.......... a couple of years ago it would have been a huge step into the unknown, now I think of it as a leap of faith.  Faith in our ability to keep ourselves well fed and healthy, made all the more special because we truly are doing it ourselves..... and doing it together.
~
Sue xx
Posted by Sue at 08:42