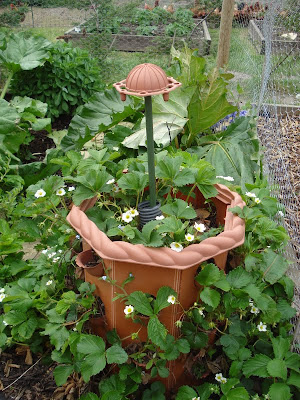 After yesterdays post I had a couple of emails asking about how and where I grow my strawberries.   At last I think I'm doing something right because the past two years have been my best ever strawberry years, so I'll be brave and tell you.
Last year I transplanted some 1 year old plants and some 2 year old plants, some in the strawberry tub and some on the ground, they are all in the raised bed where I grow my Rhubarb and Berries (Blue and Goji), there is a chicken wire fence around this.   In the first year it was to keep the chickens out when they free ranged all over the farm, now they have their own fox proof area I was tempted to take down the fence, but Lovely Hubby had worked so hard to get the posts in I though I would leave it.  It does mean that now the berries are ripening the wild birds leave them alone as the fence, although low, seems to act as a deterrent.
Last year I harvested the fruit from the 2 year old plants but left the fruits on the younger plants (excruciatingly hard to ignore the sweet little strawberries but now, as I reaping the rewards this year, I'm so glad I did).  The plants are all strong and throwing off a bowl full of berries every single day.
There are about 16 plants in all and now they are 2 and 3 years old.  The older plants last year threw off lots of 'runners', their own baby plants that find a patch of soil and set their own roots.  I don't do much to these, just slightly change their course of direction if it is going to be on a path and find little 'v' shaped twigs to lightly peg them down so they get a good chance of getting their roots down quickly.  At the end of the season you can snip through the long 'runner stem' and leave the plant to develop all by itself. 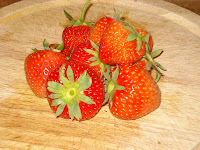 Interestingly I have found that the plants on the ground that are all higgeldy piggeldy thrive whereas the ones in the tub are much weaker and produce about a third as much fruit.  You would expect that ground plants, some of which end up in the shade, who have to compete for light and who occasionally get stepped on (oops), and some of whom have merely rooted in the bark chippings that I put down as a mulch...would do worse but no, I think because I have created a natural environment for them they are thriving.  It is almost as though they are growing on a forest floor.
In the polytunnel I have a smaller strawberry tub that I planted the strawberry plants that I grew from seed early last Spring.  By Autumn they had lovely little fruits on, which again I ignored, and this year although not fruiting as prolifically as the outdoor ones they do provide me with at least 2 little strawberries to nibble on each day while I'm pottering about in the polytunnel.
I hope this helps some of you, if you have any more questions about my methods, please feel free to ask. 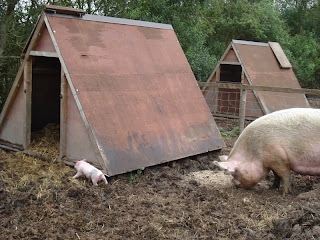 And finally - at last I got a picture of one of Martha's babies, but as you can see it was running for the safety of the ark.  It had nipped over to try and pinch some of Mum's spinach leaves, but NOBODY pinches Martha's spinach and it  got a good telling off !!
She is being a very good Mum now, very protective, but yesterday she lost ALL her babies!!  They discovered if they lay down flat they could wriggle under the fence and get into Daddy's enclosure, luckily for them Daddy was out and about with his current wife, so they all curled up and fell asleep in Daddy's bed (Goldilocks has nothing on this lot!!).
Lovely Hubby found them when he was doing the feed rounds yesterday afternoon, after a heart stopping moment when he thought they had all vanished into thin air, he checked all the other houses and there they were.  After a minor scuffle we managed to catch them all and pass them back over the fence to Mum, who told them off in no uncertain terms.  I don't know what she said but they stood in a little shivering group while she went back to her tea.  After five minutes they trouped back into the ark (except the one I photographed) and waited for Mum to arrive with the 'Milk Bar'.
Today they are doing as they are told and peace reigns in the Orchard.
Sue xx﻿
Posted by Sue at 09:11