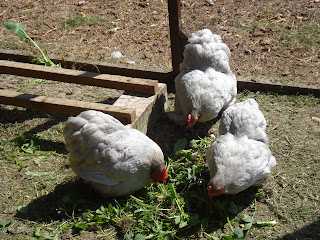 ~
Alice, Little Lucy and Fern enjoying a salad of mixed weeds while we get on with the work.
~
On Saturday while the sun was shining we decided to assemble the new little broody house.  After Alice's chicks were attacked by the other girls because she kept forgetting about them and leaving them to their own devices for too long, we decided that in future all sitting 'broodies' would move into their own little run.  Hopefully this will help them bond better with their chicks, so we set to putting it together, or rather Lovely Hubby did while I cleaned out the other girls house and flitted about with the camera from time to time.
~﻿ 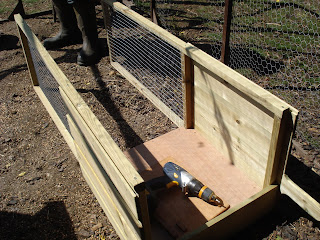 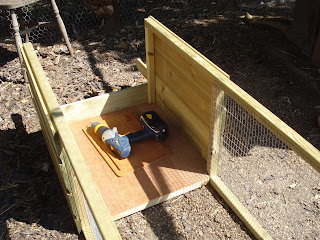 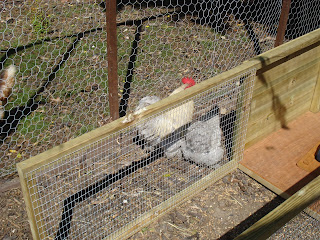 ~
Meanwhile progress is closely examined by Caldwell and Iris.
~ 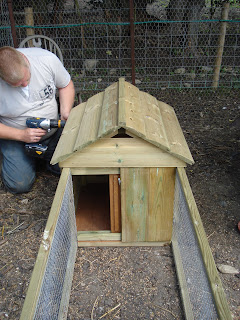 ~
Back on the job and the little house is assembled.
~ 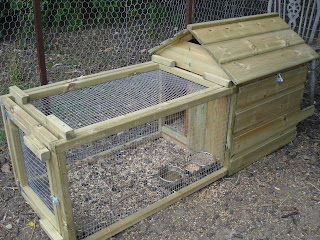 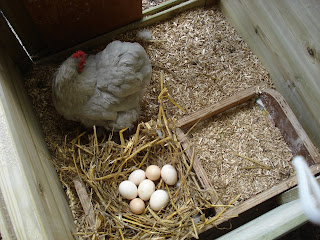 ~
Isabel safely installed in her new des res with her seven little eggs.
~
This gorgeous and useful little house was bought from one of our favourite suppliers Flyte So Fancy, they're great for anything you could possibly imagine for your chickens..
~
Meanwhile on the rest of the farm the aroma in the air is....how shall I say....BL***Y AWFUL!!  Our landlord has got in what looks like the Everest of treated sewage to spread on his fields.  All last week trucks and tractors were moving and spreading the offending 'stuff' and now that it has rained and the sun has been on it in between showers the smell has reached a level that cannot be described.  Well it can.....it smells like an enormous gas leak!!  Now before you all panic and urge me to check for leaks, just a reminder we live in the middle of nowhere and do not have access to any gas, which is what LH had to do when I first came down the other morning and said 'I'm worried I can smell gas'!!
~ 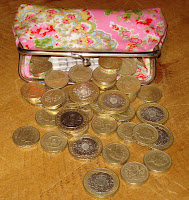 ~
Update on the £100 Challange.
~
This week, as admitted yesterday, we managed to spend a whole £6.50 of our cash on two items at the Farmers Market, a loaf and a Tear and Share bread.  The moral of the story....a hungry man and woman and their cash are soon parted when yummy temptation is put in front of them!!  We did, however not visit a supermarket even once.
~
This means we have £93.50 of our budget remaining, this week I will need to buy some milk so I will have to dash into said  'bad place' wearing my blinkers so I am not tempted by anything else!!
~
Sue xx
Posted by Sue at 10:04