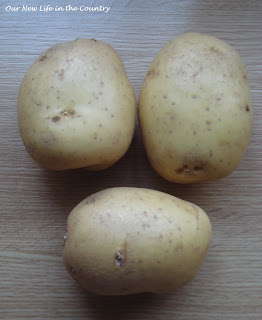 Here I am down to three potatoes and two fishes (ginger salmon fillets), so what did I choose to make next? 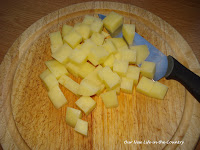 Well Lovely Hubby has a really bad cold at the moment and has pretty much lost his senses of smell and taste so it had to be something a bit zingy.  I chopped the next potato into little cubes and quickly cooked them in an inch of so of boiling water. 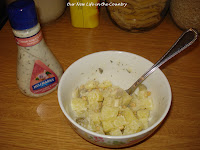 Then I added some chopped up gherkin (cornichon), with a bit of salad dressing it was tasty but looked pathetically meagre for two of us ... 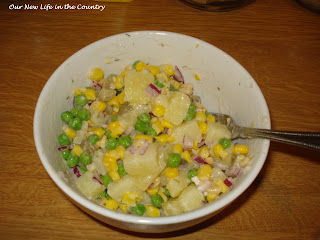 ... so I added some chopped up red onion and a handful each of sweetcorn and peas, much better. 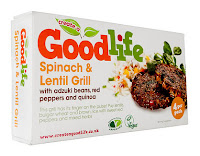 With this we had a tasty Spinach and Lentil Burger on a homemade bread roll (yay...I've finally mastered soft rolls), topped up with sliced red onion and sliced gherkin (to echo what was in the potato salad), a dollop of good old tomato ketchup  and a slice of cheese, anything I could think of really to get LH's taste buds zinging again.
It was a yummy and very filling meal.
*** *** *** 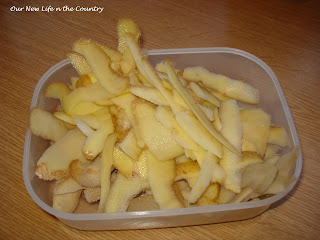 Since I started this challenge on Sunday I've been saving these, the peelings from the potatoes to make one of my all time frugal staples, one my boys know well, they grew up having it whenever times were really tight.  It sounds YUCK, but tastes divine ... 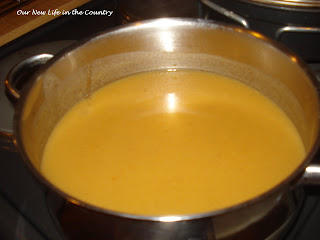 ... Potato Peelings Soup.
And of course because most of the vitamins and minerals in food is just below the layer of skin it is extremely nutritious to boot!!
This time I started with a base of the Veg Hash (blogged about HERE) and then added a small red onion, the potato peelings and a jug of stock (cheapo cube and water) with added chilli and garlic flakes, brought it all to the boil and then simmered it gently for an hour, then it was whizzed with my stick blender in the pan until it was nice and smooth.  It was made during the afternoon and the flavours left to develop until teatime, when it was quickly reheated. 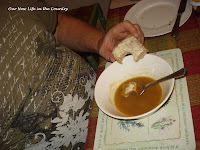 It made three very large bowls of soup which I served with homemade sliced bread, of which greedy boy had two bowls (I quickly snapped this before he finished his second one and there was none left).  It was extremely tasty and possibly the cheapest meal of the challenge.
Potato Peelings - 0p
Onion - 10p
Cheapo stock cube - 1p
Chilli and Garlic flakes - .5p
Soup total cost 11.5p
One bowl of Soup just under 4p 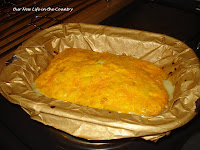 Not knowing that greedy guts would have two bowls of soup (I thought one would be taken to work for his lunch today), I had also made a second course from one of the ginger Salmon fillets ... this lovely Fishy Bake. 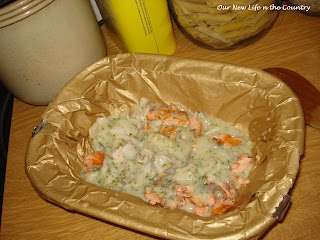 My Mum in Law, Jessie introduced me to this recipe a couple of years ago and we always think of her when we have it.
It's very simple, take the fish of your choice, this time I used one of the Ginger Salmon Fillets and two smalls packs of Cod in Parsley Sauce, the recipe works brilliantly with ANY type of fish, the more flavoursome the better, think kippers, mackerel etc etc.  Place your fish in the bottom of an ovenproof dish (I always line the dish this recipe sticks like mad to whatever you cook it in, it took us a few days of soaking to clean the dish the first time we made it!), beat together a couple of eggs and pour them over your fish.  Sprinkle a handful of grated cheese over this and pop in a pre-heated oven for about 25 mins.
It comes out puffy and golden and smelling divine, although LH couldn't appreciate this with his cold.  It is very filling, hence this morning LH has trotted off to work with a good slice of it to have for his lunch.
So up to now the challenge is going well, I have managed to make -
Sunday
Spicy Tattie Puffs (1 potato)
Salmon and Broccoli Quiche (1 fish fillet)
Monday
Lentil Burgers with Potato Salad (1 potato)
Tuesday
Potato and Veg Soup (0 potatoes, peelings only)
Cod and Salmon Bake (1 fish fillet)
and I have remaining
2 potatoes (no peel)
1 fish fillet
So I'm thinking (inspired by comments on the first Potato and Fish Blog post) I should make some Fishcakes, with a bit of chilli in them it might just get those pesky taste buds back for Lovely Hubby :-)
*** *** ***
A Blogging Buddy, Frugal in Norfolk  has done something very similar with THIS brilliant idea for 4 Chipolatas.
You can't get much better than feeding two people for two meals with 4 sausages,  I think I have some sausages and veggie sausages in the freezer so this could be happening next week, after all I will have NO potatoes left by then and this will keep my £2 Housekeeping Challenge on track, as will the cereals I won yesterday as lots of you spotted, maybe I should go in for more competitions to win food, something to think about!
Hope you're all keeping warm - it's freezing here .....literally.
Sue xx
Posted by Sue at 10:23