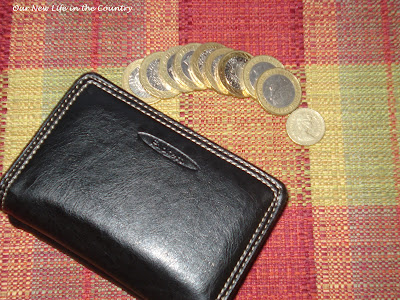 We have both been craving some fish, so yesterday, for the first time in ages partly due to being snowed in and partly due to feeling so weak that a car journey seemed totally out of the question, I decided to wrap up well and make an expedition for supplies.  I needn't really have spent anything, we have some salmon in the freezer but for some reason I was really fancying some breaded fish fillets, I was also fancying some Vimto....

..... so Vimto it was and while I was picking that up I was waylaid by my usual liquid refreshment.....

... sparkling water, I bought 10 bottles of the stuff so I will see how long that lasts me.
*** *** ***
So my rather unusual shopping this week consisted of
Two packs of breaded fish for £5
Ten bottles of Sparkling Water for £1.70
One bottle of Vimto for £1.39
Total Spend £8.09
with 91p going into the Sealed Pot
£480/£466
So looking at these figures our average weekly housekeeping budget available for the rest of the year is now £9.70, up from the original £9.23 due to careful, indeed almost non-existent spending.
I apologise for the stock photos but after trekking to the shop and back I was totally exhausted and merely chucked everything in the fridge and cupboard.  We had eaten one of the packs of fish before I even thought about taking a photo of the shopping.
Our snow has now almost vanished and the view from the kitchen window is one of an amazing greeness that we haven't seen for almost three weeks, it looks really fresh and lovely to our snow jaded eyes.
Have a lovely weekend.  Hopefully I'll be back on form by Monday, I see a weekend of lazing around watching tele and reading books ahead of us both.
Update on Caldwell - he's now back out with the flock although not surprisingly he has lost his place at the top of the pecking order, he is having some difficulty fitting back in due mostly to the fact that Harold, who used to be second in command is a great big, young and good looking Light Sussex cockerel who seized his day and decided to take over the flock.  I had to let Caldwell and a couple of the friendlier lavender Pekin Bantams sleep in the Eglu for the last couple of nights to stop him being bullied.  We'll see how it goes. The main thing is that his injuries have healed up nicely.
Sue xx