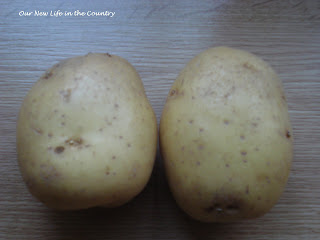 I was going to make two meals out of these potatoes, the plan was for one of them to mixed with the last remaining Salmon fillet and turned into fish cakes and the other to be chopped into matchsticks and added to a Spanish Omelette for tomorrows tea, but to be quite honest I am full of a cold, a pretty bad one and feel YUK, so I took the easy way out  and used them both to make fishcakes. 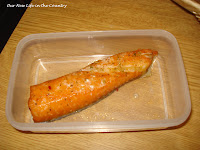 So with the addition of the last remaining Ginger Salmon Fillet a finely chopped red onion and then being dunked into beaten eggs and then some brown breadcrumbs from the freezer .... 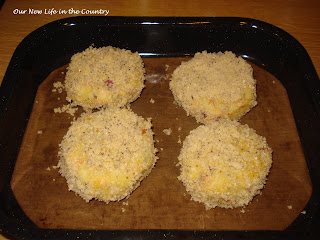 ... four substantial fish cakes were produced.  I left them in the fridge for an hour after assembling them to give them time to firm up and then decided that as they were bigger than I originally thought they were going to be we would just have one each for our tea and the others would be popped into the freezer to make meal number six for another night. 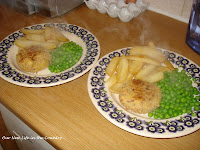 Really they are slightly too 'potatoey' and my original plan would have been better, but they were extremely tasty and very fresh tasting.  So that's all my potatoes used up now.  I have half a bag of frozen chips in the freezer and some sliced up potatoes to have as wedges for a couple of meals and I think I have some of the stew packs way down deep in the freezer, so we are not completely out of the humble spud.
We were though almost out of fruit ... 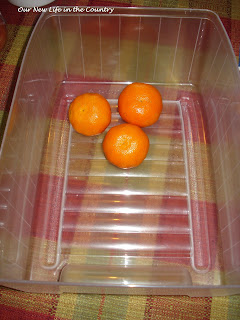 ... look at the fruit drawer of the fridge as it was yesterday morning.
So it was off to the shops for me yesterday before the forecasted blizzards hit to spend some of my £2 Housekeeping Challenge money.  I thought I'd get us some fresh stuff to try and fight off these colds, yes Lovely Hubby is a poorly boy too, in fact he shared his cold with me, we share everything we do....isn't it romantic...lol!!
The weather here is exactly as forecasted with snow tumbling merrily from the sky and my car is almost obliterated already.  Time to fill the log basket and hunker on down for the weekend.
I'll be back tomorrow with pictures of what I bought at the shops, how much I spent and perhaps the obligatory snowy picture.
*** *** ***
Now I'm off to wake up Chicken World and give them some breakfast and warm water to warm their little tummies.  Caldwell is still with us, in fact he was crowing at 6am this morning in the kitchen, now a cockerel in your kitchen has to be heard to be believed.  His head is still pretty bloody but we are leaving the dried blood to fall off naturally we don't know what damage is under there. Today I am fetching the larger dog crate into the house so he has more room to stretch his legs and move around, so his enforced sit still and get better will be over and it will be up to him.
Thank you for all your good wishes, prayers and brilliant comments for him yesterday it was very appreciated, he may only be a bird to some folk but he's our bird and we love him like mad ..... although maybe not quite so much at 6am crowing in the kitchen :-)
Sue xx
Posted by Sue at 08:20