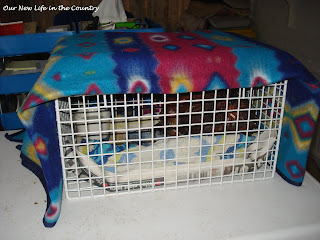 Our utility room is currently the 'Recovery Room' for poor little Caldwell II.
We had a fox attack yesterday, he managed to get away with two of our little girl Lavender Pekins and Roadrunner, the smallest of our Lavender Pekin cockerels, bravely Harold, the Light Sussex cockerel and Caldwell defended the flock before he could get any more and the geese rushed to the defence but both Cockerels came off worst for wear.
Last night we thought we had lost Caldwell, there was no sign of him anywhere, I walked the paddocks and the edges of the woods with the dogs looking for him or any other survivors but come dusk we had to close up the henhouse with heavy hearts thinking we had lost four birds. 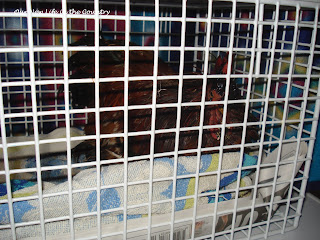 This morning after cleaning out the henhouse and making sure Chicken World was fully stocked with food and warm water for some reason I was drawn to walk between the worm beds, something I don't usually do and there I spotted my missing green bucket (it's been gone since the windy day we had last week), as I bent to pick it up I spotted a certain gentlemans tail feathers sticking out.  With a sigh I reached in to get him thinking he was dead BUT he moved.
I thought he had had massive trauma to his whole head as it was completely covered with dried blood, it looked like a dark reddish black hood, but after taking him into the 'emergency room' (the kitchen), now after a lot of cleaning with warm water in the kitchen sink I can see most of what has happened.
He has had a huge bleed all around his comb and as this area is very rich in blood supply it had completely covered his head, all I can think is that after being injured and while he could still see he made for safety and chose to run head first into the bucket.  Luckily for him it was between the worm beds which are well insulated agains the cold and I think it was this that has saved his life as he has been out in temperatures of  minus 4 degrees all night.
As he was getting a bit traumatised I stopped bathing him after I had cleared one eye, so now he can at least see what is going on around him.  I will tackle the other eye and see if there is any more damage to his head when Lovely Hubby is home tonight it will be so much easier with two of us, and I think that for now being indoors and warmer will help him to try and sleep off this dreadful ordeal.
He's safe and secure in the cat basket with some water to drink if he wants it, but for now all I can do is wait and let nature start the healing process for him.  He must be feeling slightly better he has just crowed a few times in answer to Harold crowing over in Chicken World.  A cockerel crowing inside your house has to be heard to be believed, it's a good job he's a small bird. 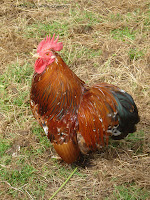 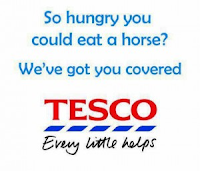 Making our own food as lots of us do means at least we won't have to be worried or alarmed at this latest food revelation!!  Shocking I know from a labelling point of view, but something at the back of my mind says if it's okay to eat pigs, cows, sheep etc why do folk balk at eating horse!!  I understand the religious viewpoint but for everyone else if you eat meat....you eat meat!!
*** *** ***
A message for Iris and Fern - Poppy and Daisy are okay and are with our other Lavender Pekin boy who is looking after them wonderfully.
Sue xx
Posted by Sue at 10:38