A Cockerel in my Kitchen 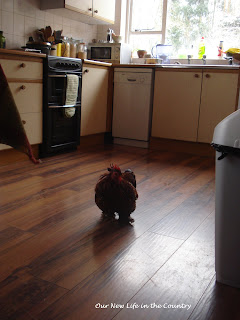 Lots of you have been asking after Caldwell so here he is for you all to see, alive and well and living in the kitchen. 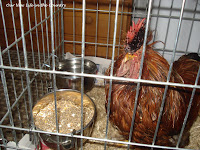 When I first rescued him after his night in the bucket (see HERE for more information), he was in a sorry state, but hour by hour, day by day he's been recovering nicely.  After a day in the cool utility room to warm him up slowly after being outside in sub zero temperatures, snug in the small cat basket with a cover over three sides he then progressed to the large dog crate in the kitchen.  His dried on blood was once again washed, but not too vigorously, we really couldn't see what the damage was underneath all the scabs so we decided to let nature take it's course, he had already lost so much blood if we disturbed a wound we could have started another bleed. 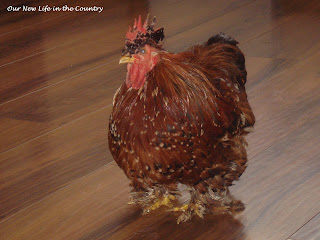 This seems to have been the right way to go.  Now both his eyes are clear, one cleared by me and the other by time.  He is much perkier and yesterday for the first time was allowed out of his cage to wander around the kitchen and stretch his legs.
After a quick explore he started to preen himself really well and I'm pleased to say he beginning to be a lot more like his normal self.  The only way I know he's not 100% back to normal is that he's not even tried to peck me yet, he's not a very sociable bird our Caldwell.
Maybe it's just that he appreciates me rescuing him....... or maybe he's just waiting til I'm not expecting the attack!! 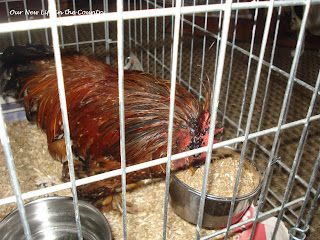 Anyway he's back to enjoying his food and seems quite content to go back to his cage after an hours wandering around  to rest and gather his strength for the crowing sessions.  The dogs will be very glad when their little dorm mate goes back to Chicken World, our two do not take too kindly to their slumbers being so rudely disturbed at 6am each morning, thank goodness it's not Summer with 4am sunrises is all I can say! 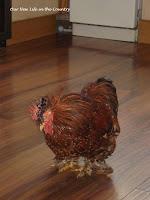