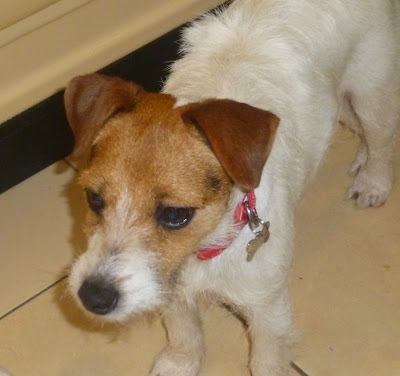 On the 29th December late in the evening during a heavy rainstorm there was a knock at the door.  A very wet and bedraggled man stood there with a desperate look in his eyes, asking him in out of the rain a rapport was quickly made between him and Lovely Hubby as he recognised LH's accent, it turned out they both knew a chap in Scotland famous for being excessively tall.  (Where do men get these off the wall conversations from?) 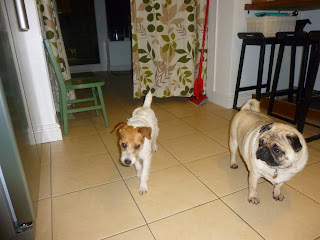 Anyway after a few moments chat out came the reason for the late night call, earlier he had found a very wet and scared Jack Russell wandering on the main road, he took her home with him and started phoning around, someone mentioned that the new folks on the hill had a Jack Russell and could it be ours?  So he came a calling.  When we answered the door with our lovely Rosy very much in evidence his face fell slightly, but we went out to his car with him to see the little lady in question.  She was a sorry sight with scared eyes and a shivering body. 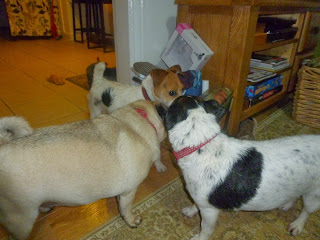 As he said there was sadly no way he could keep her we said we would think about adopting her if her real owner couldn't be traced.  His daughter put an appeal on Facebook and after a day and a half her owner was tracked down, Brian phoned him immediately and his response was 'keep her, I don't want her' and the phone was put down.  He called him back for some basic information about her but not much was forthcoming. 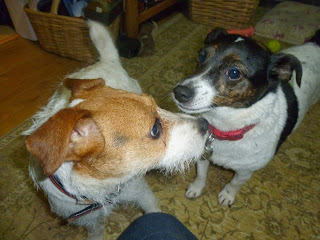 Well as you can see from these pictures she is now ours.  We couldn't let her go anywhere else.  The pictures above show the first meeting with our dogs, she was very brave, but that scared look stayed with her.  It had almost disappeared by next morning but then as we loaded all the dogs into the back of the car for a trip to the beach she once again started shivering and she huddled into the seat cushion not knowing what was ahead of her ... poor thing.
Returning from the walk and being towelled dry she made at once for her bed and slept off the trauma of thinking she was about to be taken somewhere else. 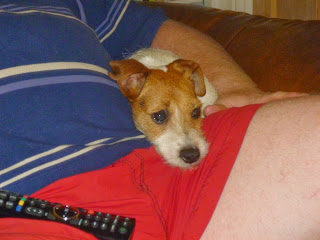 And as this photo taken last night shows she is relaxing into a home where dogs are wanted, are cuddled, are treated well and kept warm and cosy.  She is losing her scared eyes and relaxing into her new home. 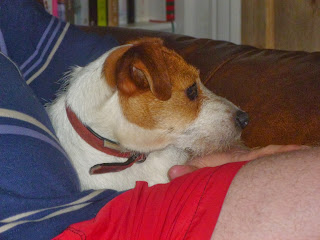 She watches what goes on but with an interested rather than fearful expression ... 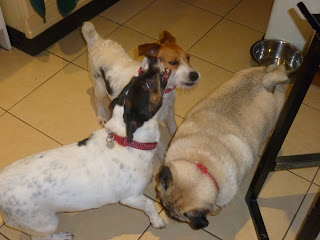 ... and she plays.
Joining in and even initiating games with the other two, it's lovely to watch. 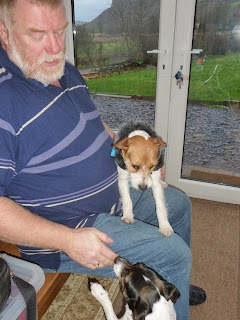 I had to do something totally girly and buy her a waterproof jacket, seeing her on that first doggy walk soaked through and totally bedraggled and seeing just how thin she was under that coat of wiry Jack Russell fur I knew too many walks in this horrible weather would surely give her a chill and we don't want that ... 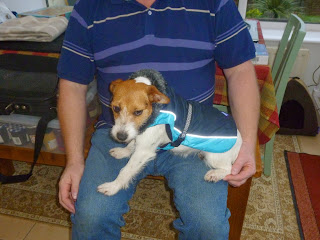 ... and anyway she look gorgeous in it. 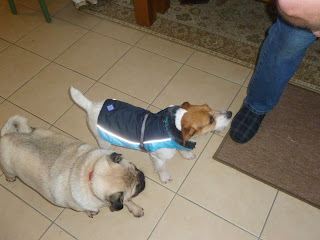 I'm looking forward to the day when she grows out of it.  Having her checked over at the vets on Friday we weighed her, she weighs just over 4kgs, the vet agrees that as a small boned Jack Russell, unlike our Rosy who is much chunkier, she should be about 6 - 6.5kgs so we have a bit of slow building up to do and it something we can do very well in our house. 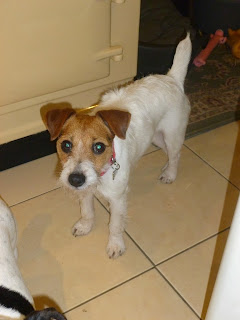 Mavis ...... welcome to our world, I hope you're here to stay for a long, long time..
I've just had an email asking me if her name was always Mavis and if not do I know what her name was before ... her name was 'Pit'. I have nothing to say on that one except to say it's not her name anymore ..... she's Mavis and she's already answering to it !!
Sue xx
Posted by Sue at 13:54