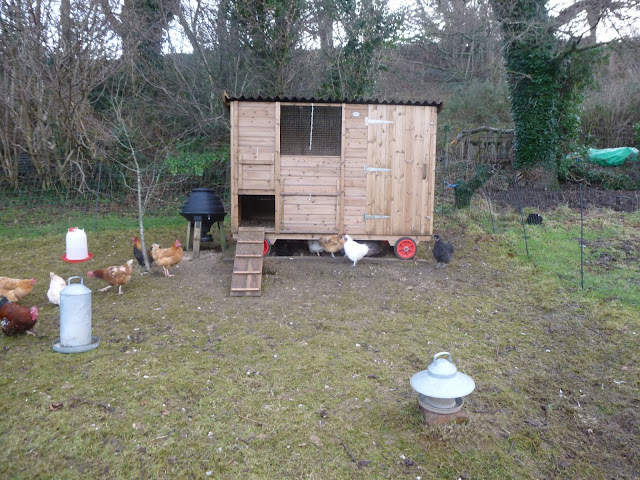 The chickens have settled in well after the move, the egg laying is down to an average of five or six a day which is the lowest we have ever had, but this is caused partly by the fact that the hen that was left behind (and caught and re-homed by our neighbour) and also the one that sadly took it upon herself to die last week were both good layers.  So if we still had them that would have been a much more respectable seven or eight.
Angel, 'the double rescue' Hyline still lays a couple of eggs a week even though she must be getting on a bit for an ex commercial layer, but for reasons known only to herself never in the nest boxes, she hops over the fence lays her egg behind our house in a pile of leaves and then hops back over into Chicken World.  We have no problem with this, we just keep our fingers crossed that she always gets back safely.  We tried moving the leaves but she laid on a pile of stones instead, so the leaves are re-instated for her comfort ... yes, we are soft like that :-) 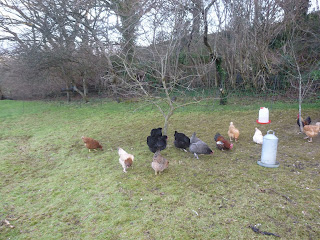 Caldwell II is still in charge of the flock .... 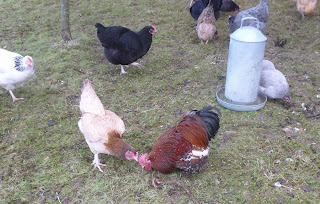 ... ruling with a iron fist of tender care for his wives, until Lovely Hubby shows his face and then the aggressive little so and so charges with feathers and spurs a flying!! 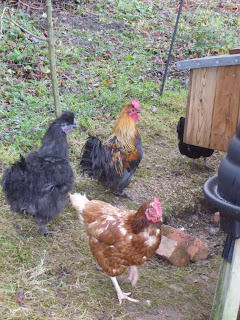 He has a young pretender in the form of Flash ... 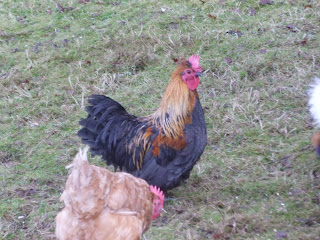 ... who is maturing into a most magnificent specimen,.
We don't know what breed he actually is as he was sold along side his siblings as a Silkie .... and he definitely NOT a Silkie!! 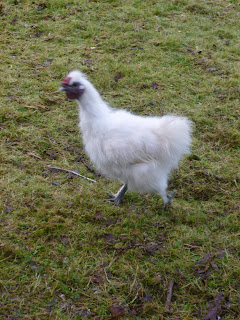 Although Snowy his sister is!!
She's always on the go, hence what is a slightly burry photo, a bundle of Silkie fluff that runs around at the speed of sound!! 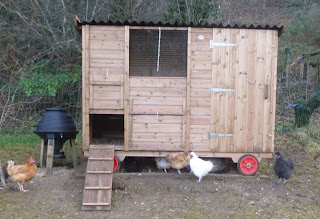 The henhouse is proving really good.  At first I had trouble adapting to a completely different style of house.  You get in your routines, any chicken keeper will know what I mean.  Cleaning them out a certain way, knowing how the birds use the house, accessing the house yourself.
We made some modifications to it to suit us and our birds better, we took out the first of the interior perches, our girls just couldn't manage the jump up to the perches without first landing on the board that sits under them, with the perches coming right to the edge of the board this was impossible and they spent the first few nights sleeping on the floor.  Luckily we have a lot less birds than the house is designed for so this is not too much of a problem.  We also made them a ramp that leads up to the shelf so the larger girls can climb up instead of jumping, our Black Marans are heavy birds and they found it a struggle. 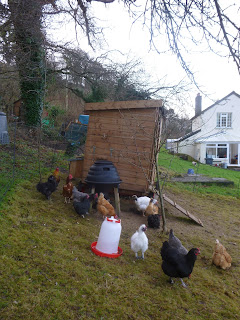 At the rear of the henhouse are the nesting boxes (accessed from inside for the birds and from outside for us), unfortunately the door for this opens downwards which just clears the incline of the hill.  It would be so much better for accessing the eggs and for cleaning out purposes if it was the lid that lifted up as it did in our last henhouse.  But for now this must remain as it is, although it is frustrating to be stood on a slope ducking down to reach in and collect eggs.
The only other downside to the house is that the perches are fixed in position with screws, I much prefer removable perches sat in recesses and  also the shelf under the perches is supposed to slide out for ease of cleaning but this is virtually impossible to do singlehandedly so I have worked out a way to clean it from inside the house, a bit of a bug bear but one that I can live with as long as we do a deep clean of the house every so often and remove these completely.
All in all it is a well thought out house and very well made, LH was impressed with the quality of the treated wood and the instructions for assembly were so easy, we could have had it assembled on site for a very reasonable cost but he wanted to do it himself so he could thoroughly check it's construction.
Now I'm used to is, cleaning it out daily for a month helps considerably with this, I am getting happier .... and the main thing is the chickens are happy and safe.  And it proves that we are happy with our henhouse we have just ordered a brand new shed from the same company to house all our chicken feed and supplies ... this time it's not a Manshed .... it's a Chicken Shed!!
At the moment we have the electric fencing round Chicken World but hopefully in the next couple of months we will be constructing a proper fenced area with an undercover space for the rain that very occasionally falls here ...... please understand the sarcasm in that last sentence ;-)
*** *** ***
Thank you for all the comments about yesterdays Blogging post.  You left some really good links to Blogs that I don't currently read and I'm sure a lot of you will be using them, just as I am, to hop even further around Blogland.  It's also nice that we enjoy a lot of the same Blogs.  Some of the ones mentioned I do already read but are not on my sidebar.  Reading Blogs can be a wonderfully time consuming occupation, but it's so nice to belong to a crowd of like minded souls.
Sue xx