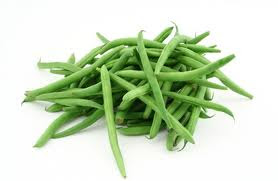 Green beans, something I used to hate when I was younger, and I mean HATE.  Until recently I never ate them or grew them, but a couple of years ago I made the decision to grow my own and give them a fair shot.

They say if there's a vegetable that you really don't like you should try eating your own, they'll be fresher than anything shop bought and much more full of flavour, you can pick them when they are younger and sweeter and eat them hours or even minutes after picking, making them tasty and more nutricious too.

I cook them simply, usually I steam them over whatever else I have cooking at the time or I will simmer them gently in salted water, but I only ever cook them for a couple of minutes, they are at their absolute tastiest when they have a bit of crunch, I serve them simply too, either just as they come out of the pan, or with a knob of butter or for a real treat tossed in a bit of lemon juice with a sprinkle of Parmesan style cheese and a few Pine nuts. 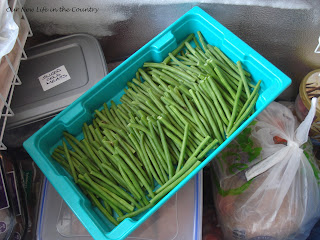 There were a couple of questions about me freezing green beans yesterday, hence this post.  In the past I have always blanched them for 1 or 2 minutes, cooled them very quickly in iced water, dried and then open frozen them, this time I decided to try it the other way.  I've been told you can freeze most veggies without blanching them, so as I had only spent a pound on these it seemed a good time to try it this way.

So these were just briefly washed, dried and then tipped onto the tray for open freezing.
Once they were frozen, it only took a couple of hours, they were tipped into plastic boxes and quickly placed back in the freezer.  I don't know if this will work, but to answer your questions I will have some for tea tomorrow night and let you know if they suffered at all in the process.

Open freezing any veg this way means that once frozen the veggies are still free flowing, just like the bags of frozen veggies you buy in the supermarkets, so you can take out as much or as little as you need for each meal, a real money saver.