Live Below the Line - My Food - Day One 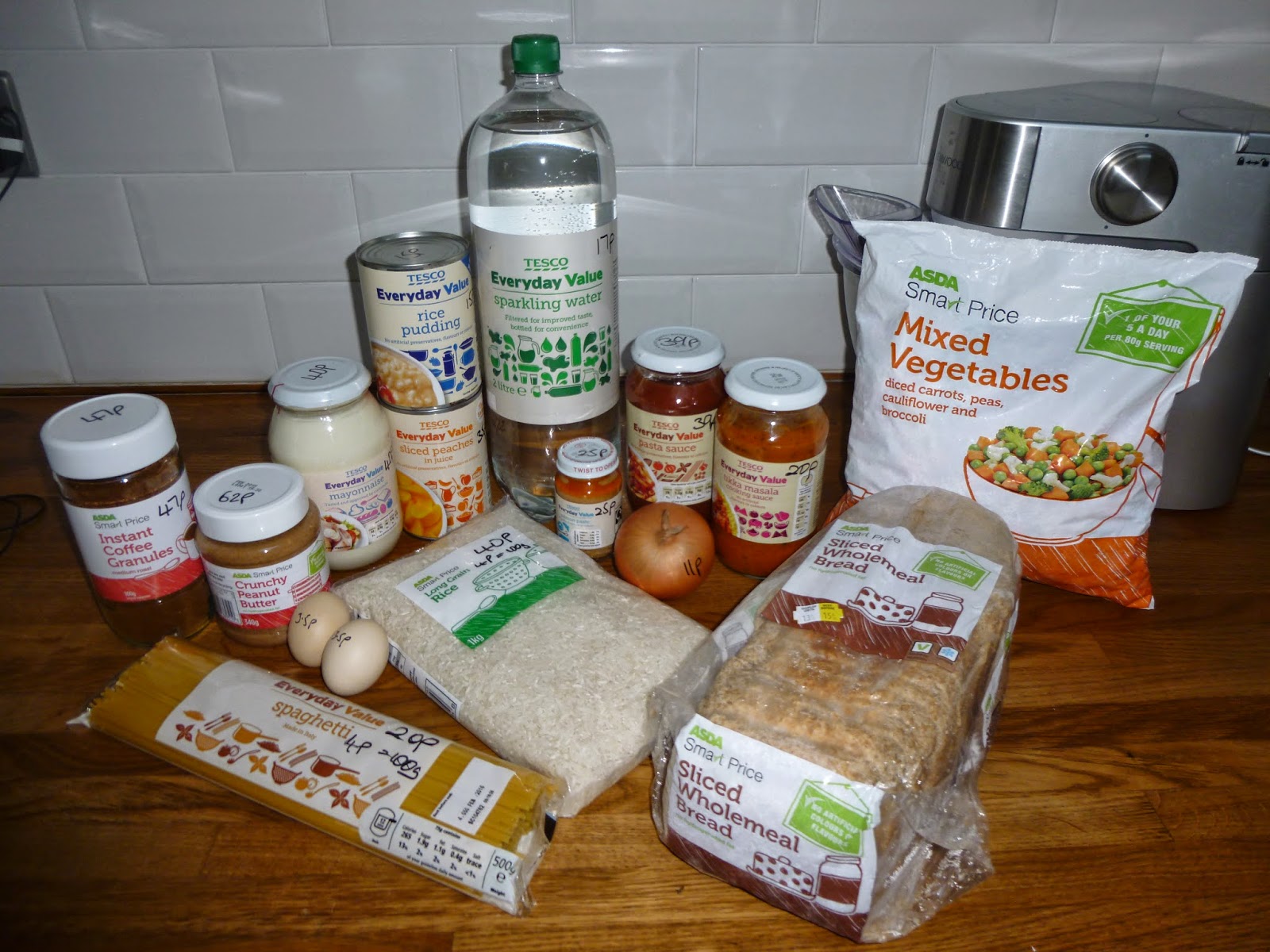 It's here - It's Live Below the Line week and this is the food I ate when I did the week slightly ahead of time, as to actually do it this week would have been impossible and I wasn't going to miss it for the world.
Of course I am very aware that I have the luxury of being able to choose when to do my week of truly frugal eating for so many folk it's the norm, the day to day reality of eating to exist.  We are so lucky those of us who can afford to shop ... really shop for the foods we fancy eating and not just those that we have to buy to fill our families empty tummies.
To donate to my fundraising page  click HERE, thank you to all those of you who have so generously donated already, I am truly amazed at your generosity - THANK YOU. 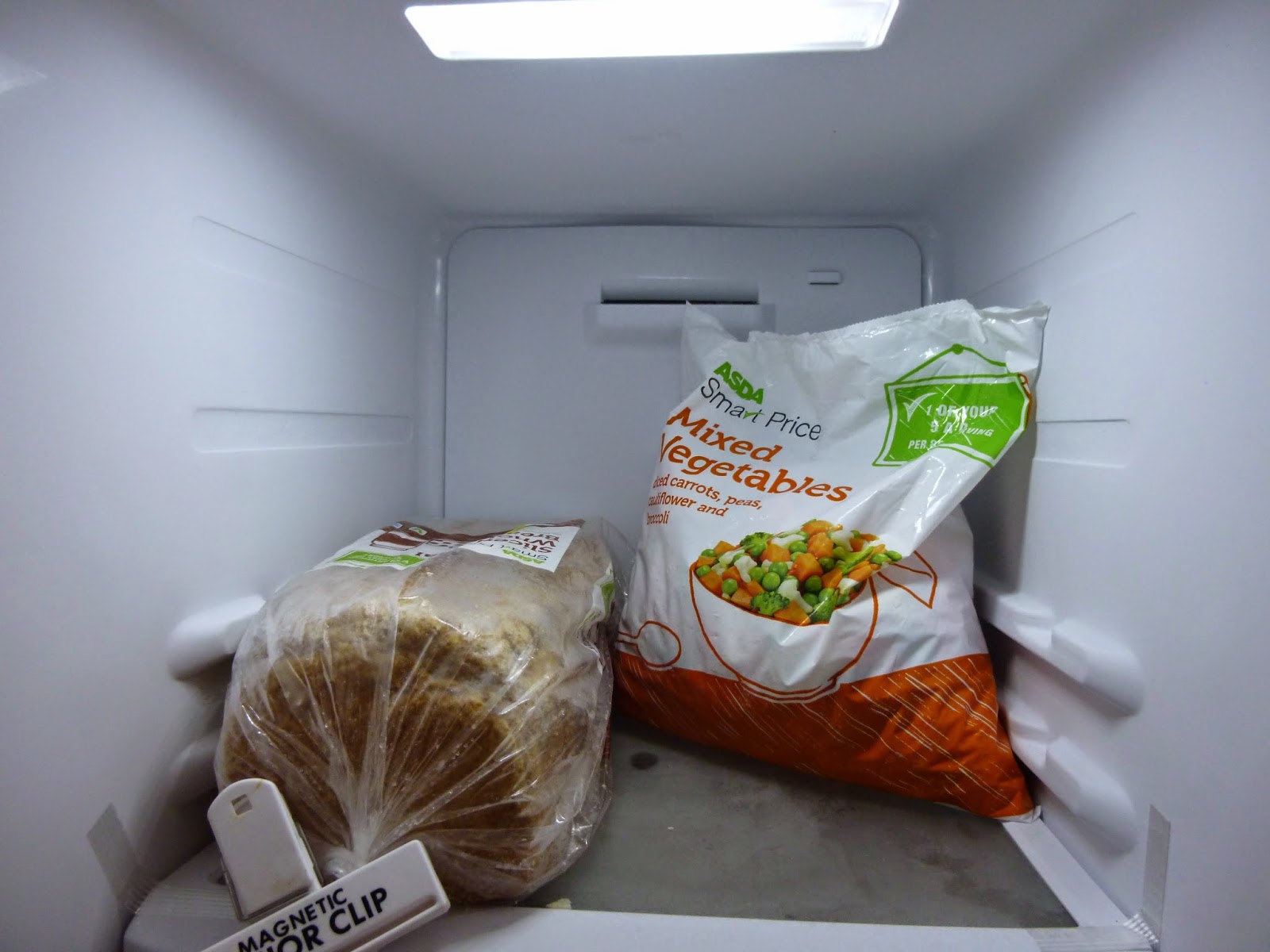 As you can see from the top picture I managed to get quite a lot for my money, but would it be enough to last me through the full five days?   It was up to me to make sure it was.  My first job after taking the photograph was to stash it all away safely.  So the frozen veg went in the freezer alongside the bread ... 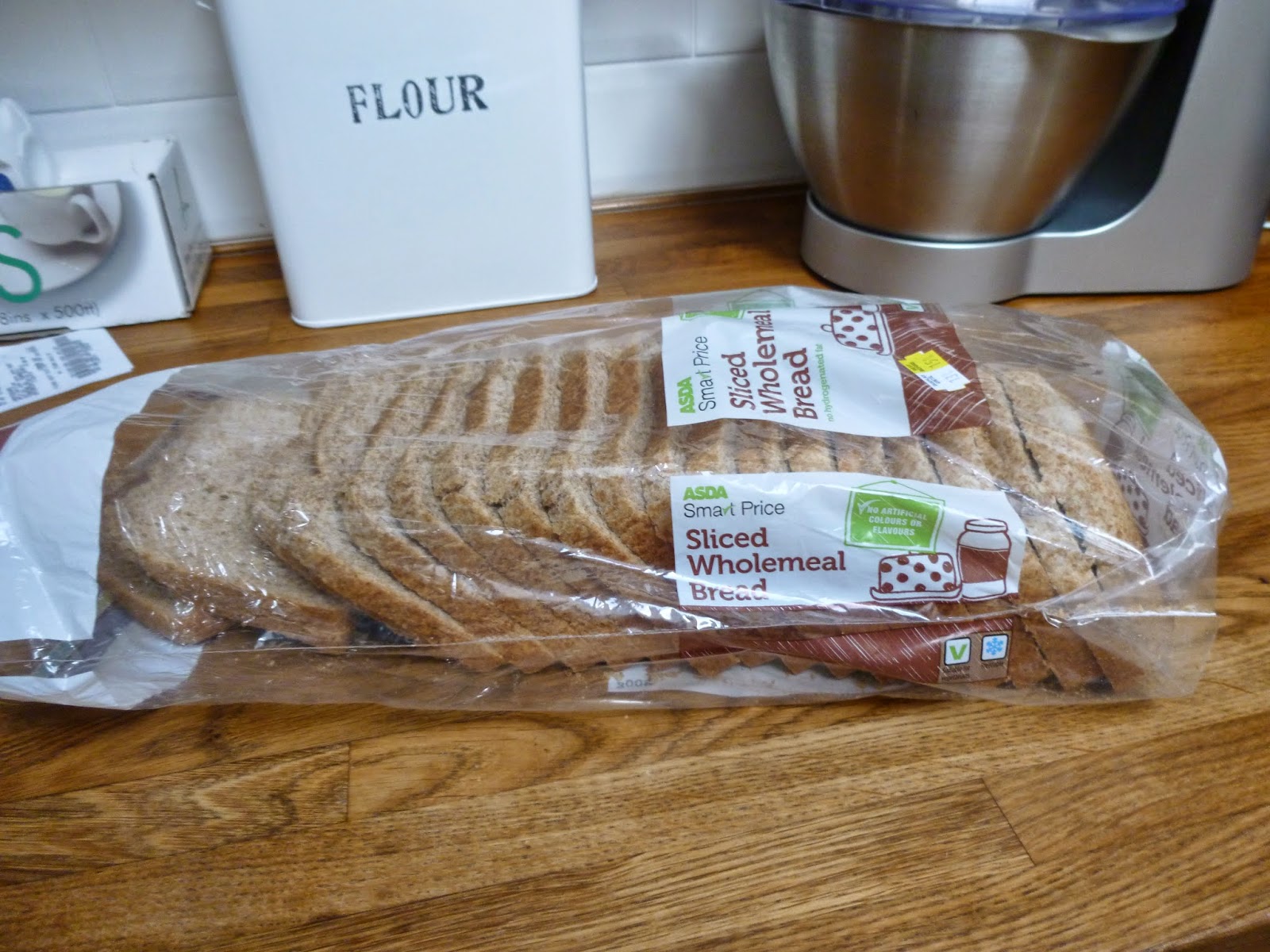 ... which I first opened up and separated the slices of .... 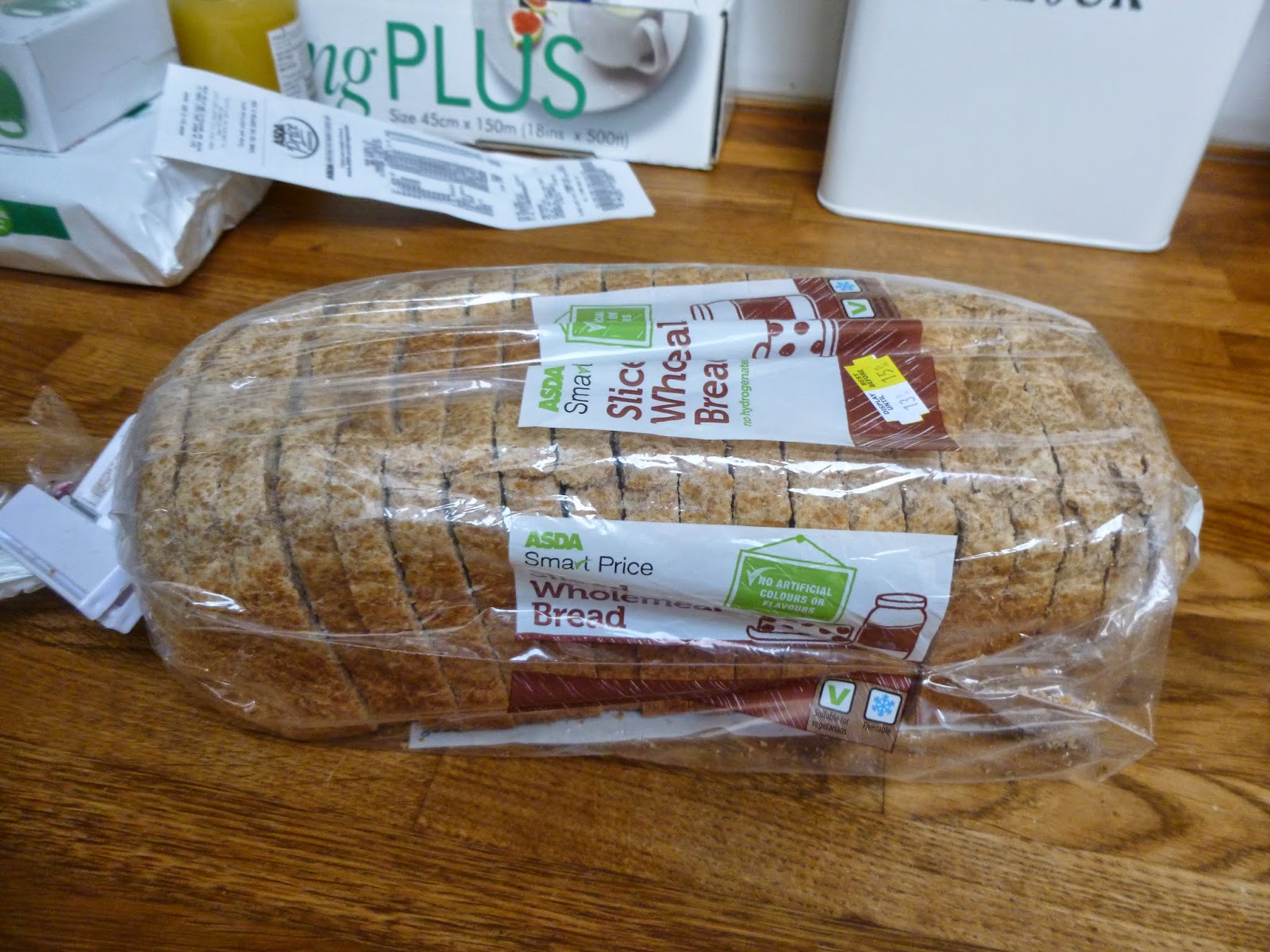 ... and then resealed with a clip so that I can get out a slice at a time without struggling.
This cheap bread at just 45p a loaf felt like a heavy brick when I bought it and I really thought it was going to be dreadful, but after separating the slices I realised that it was just densely packed and was actually a lot fresher than it had felt. 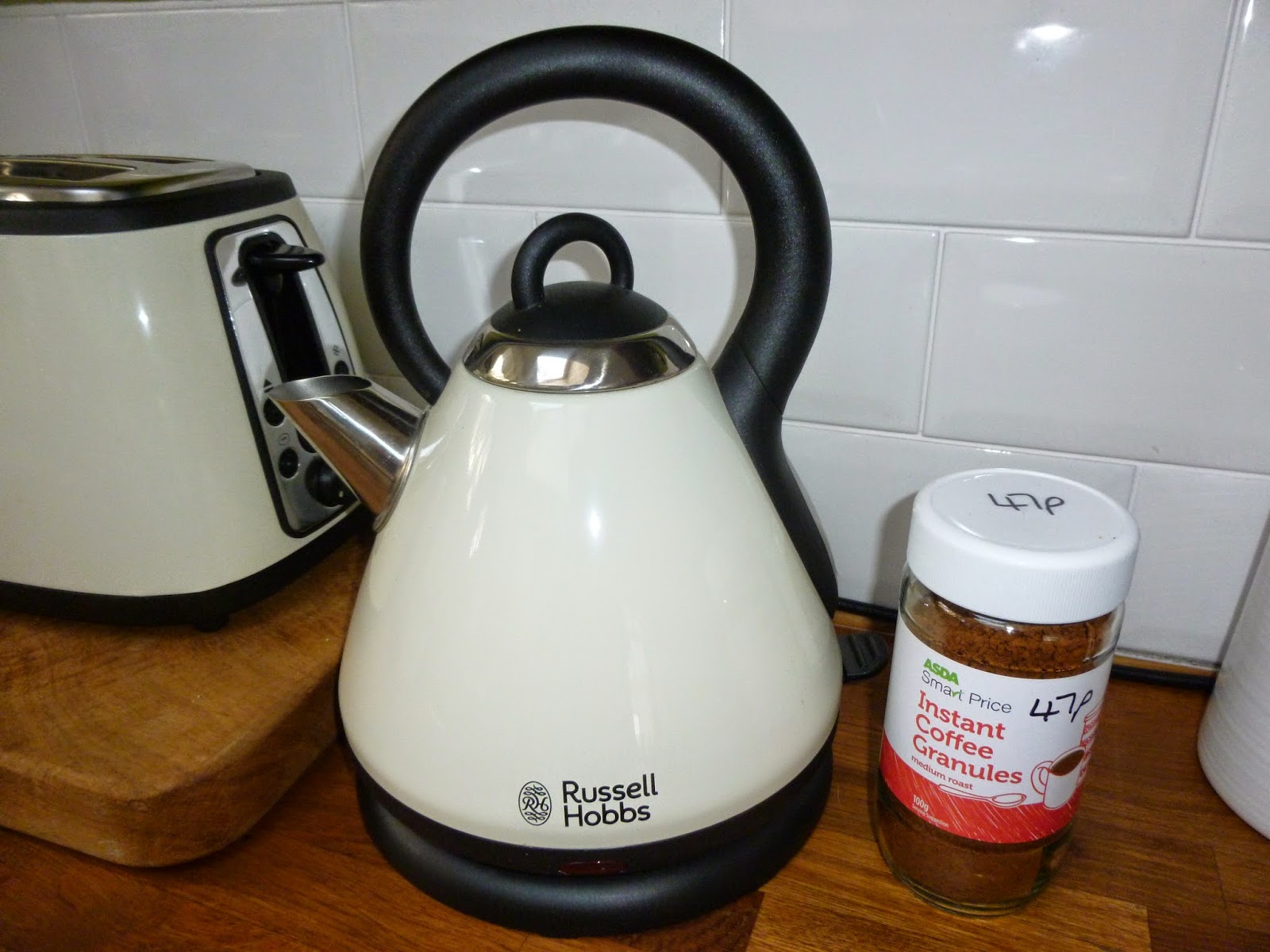 The coffee was stood ready for action next to the kettle :-) 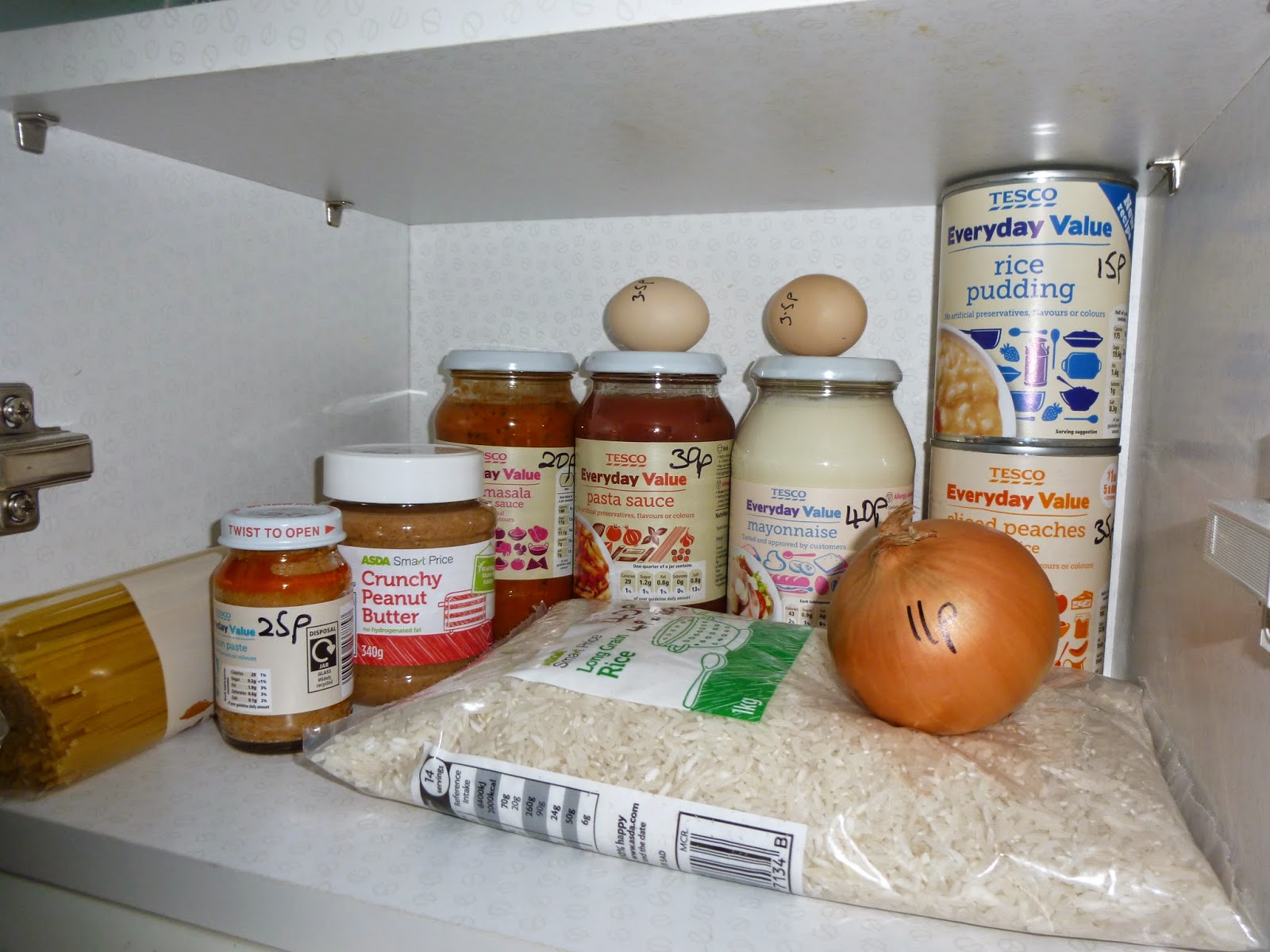 And everything else was stashed on it's own shelf in the cupboard. 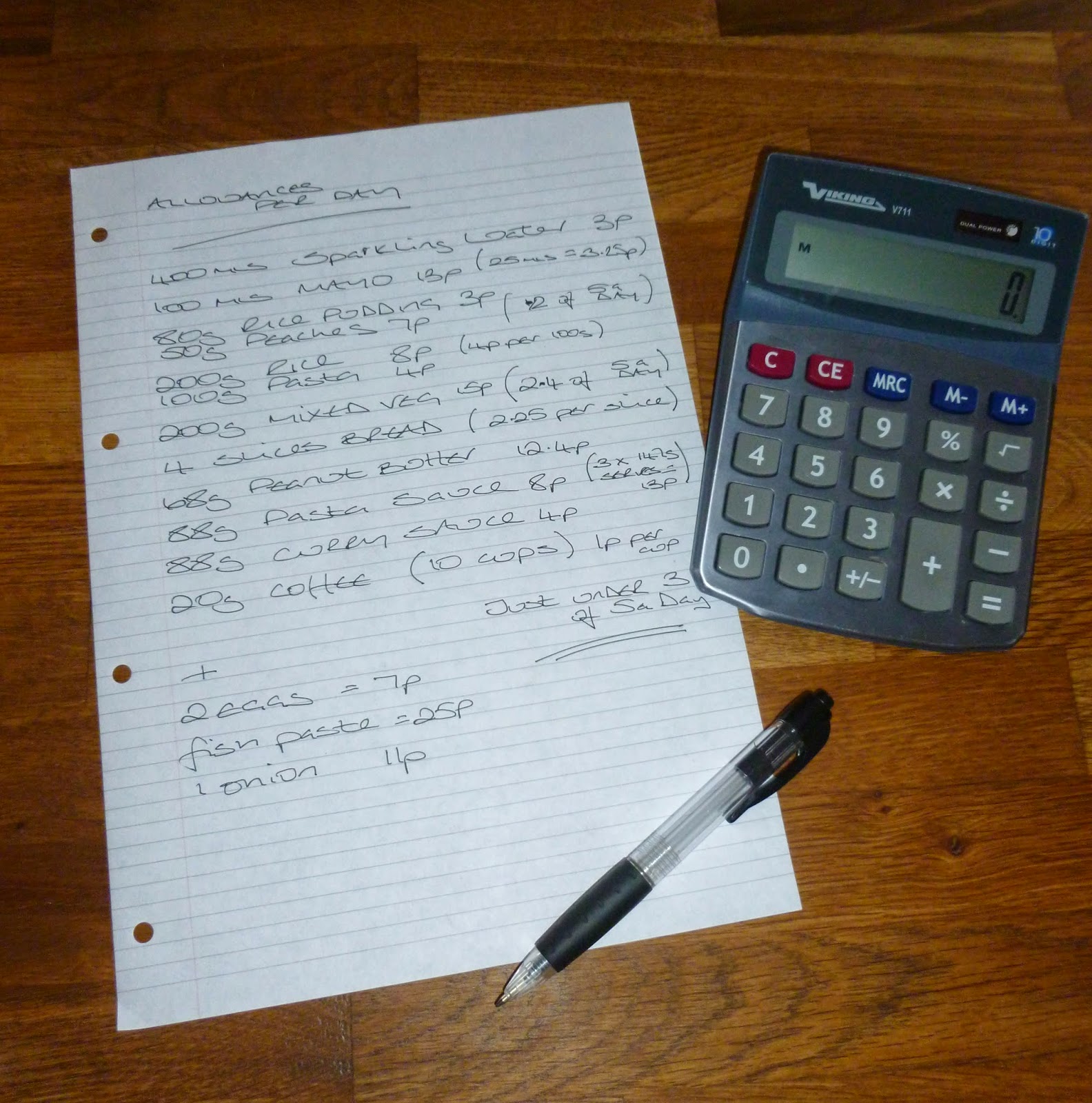 Then I set down to work out how much I had of everything, and how best to use up what I had over the five days. 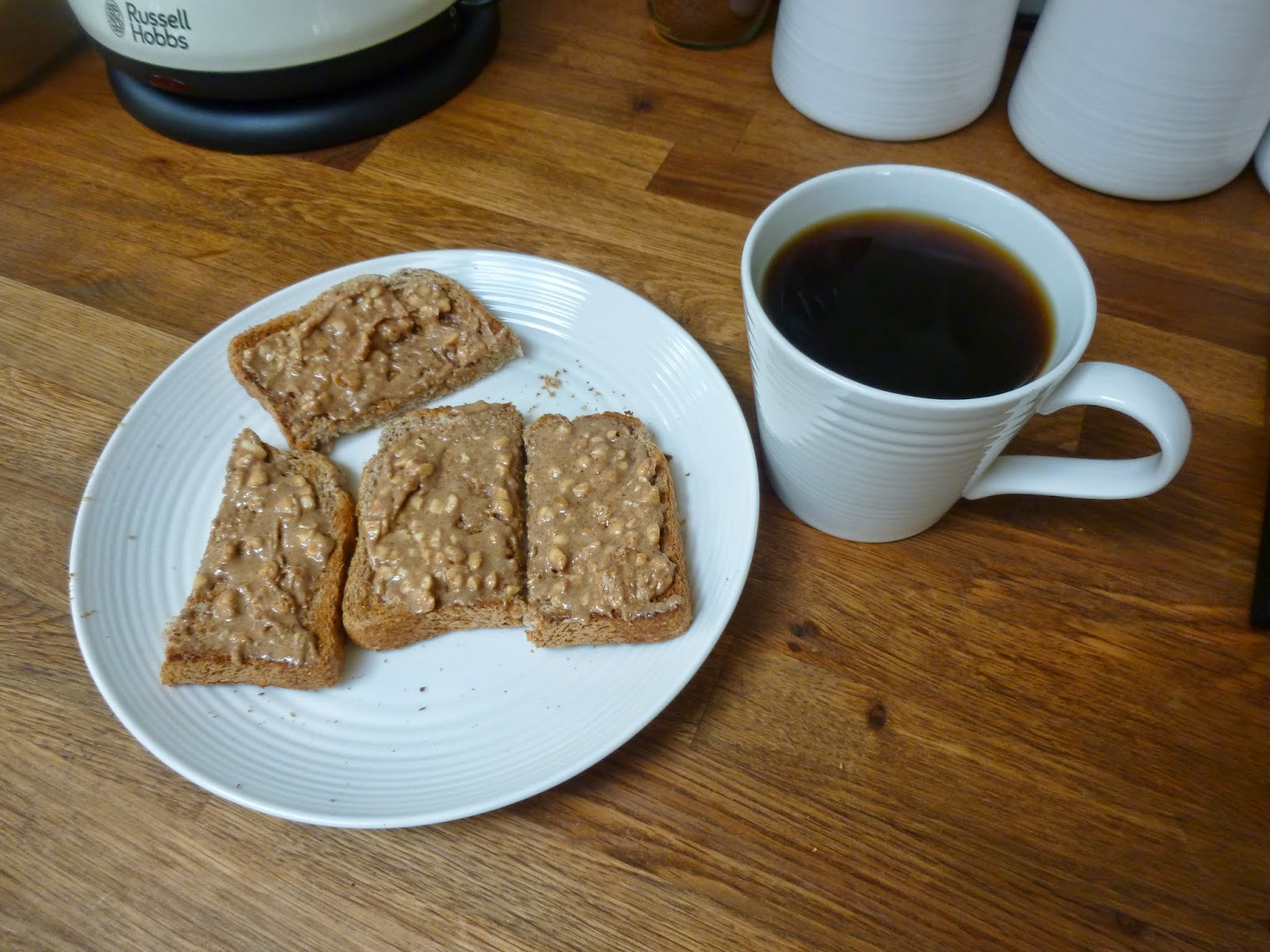 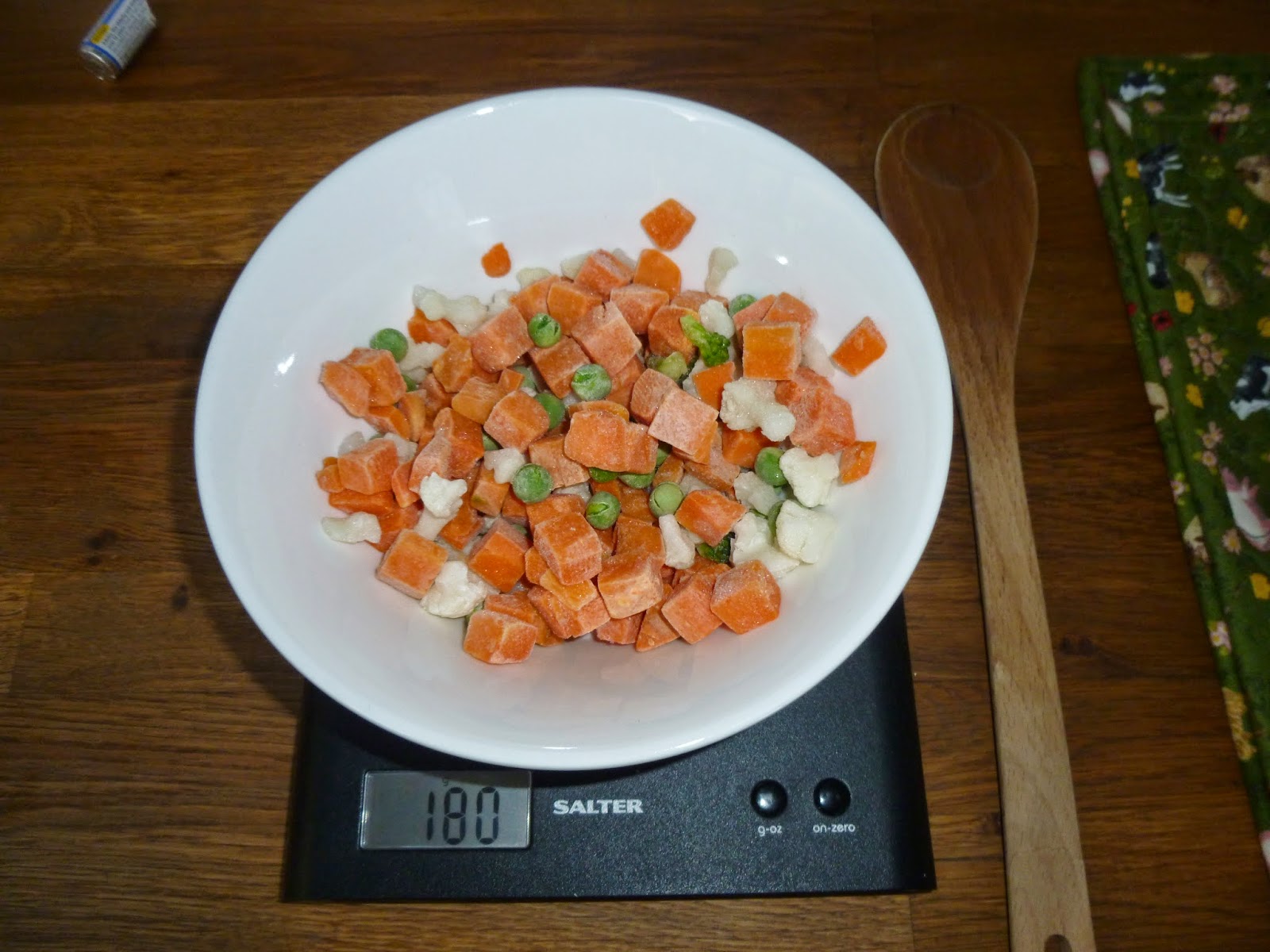 Weighing out what I had allocated for each meal seemed like a good idea, especially at the start of the week as I really didn't want to eat everything up too soon and leave myself hungry. 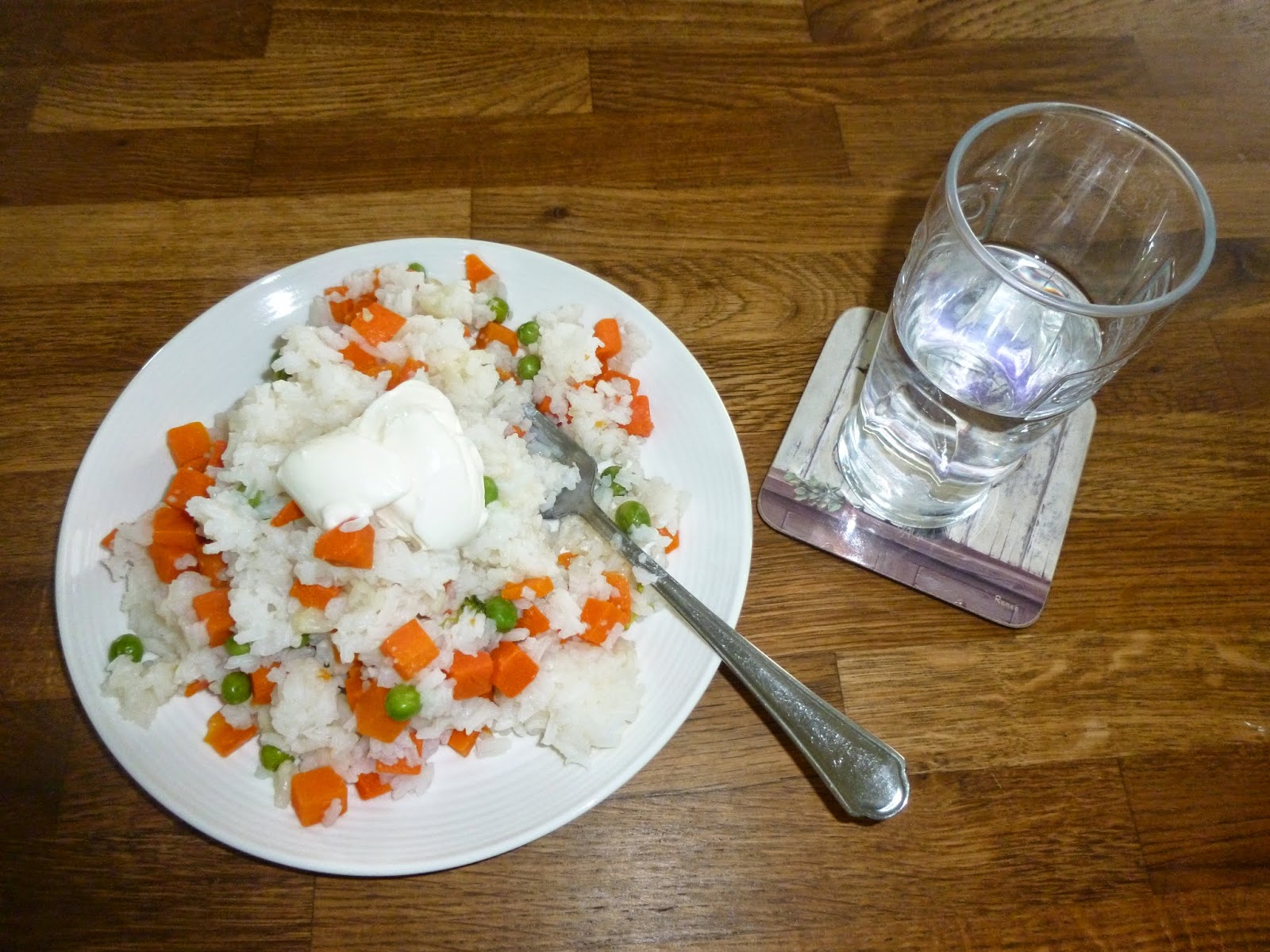 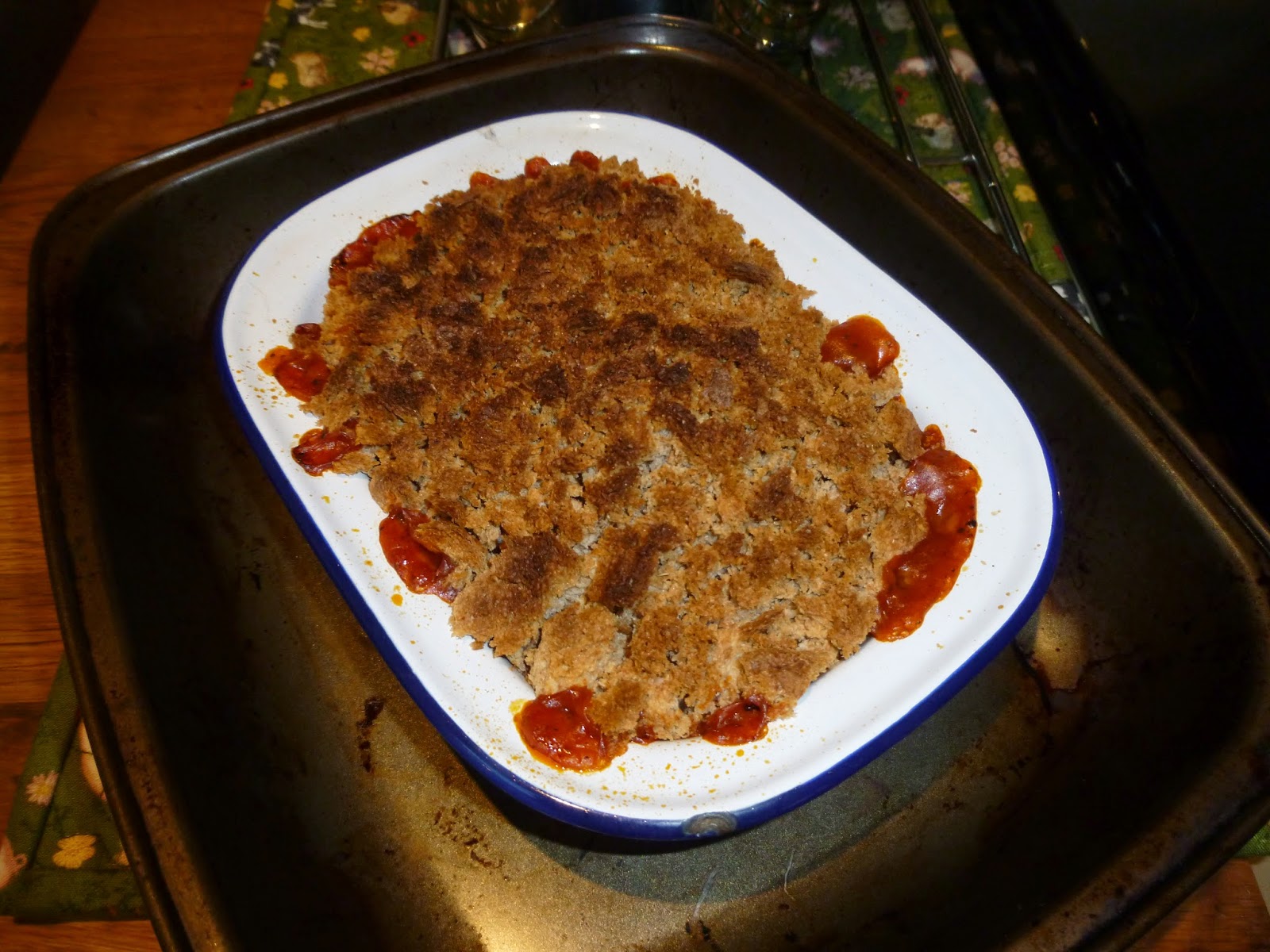 I got adventurous for tea and made a Veggie Bake.
Part of  an onion (about a quarter)
180g of the Mixed Veg
220g Pasta Sauce
1 slice and 1 crust of bread turned into breadcrumbs.
I simply started off the veggies in the pasta sauce, then transferred it to an ovenproof dish and topped with the breadcrumbs.  Thirty minutes later it was slightly overdone but still very edible. 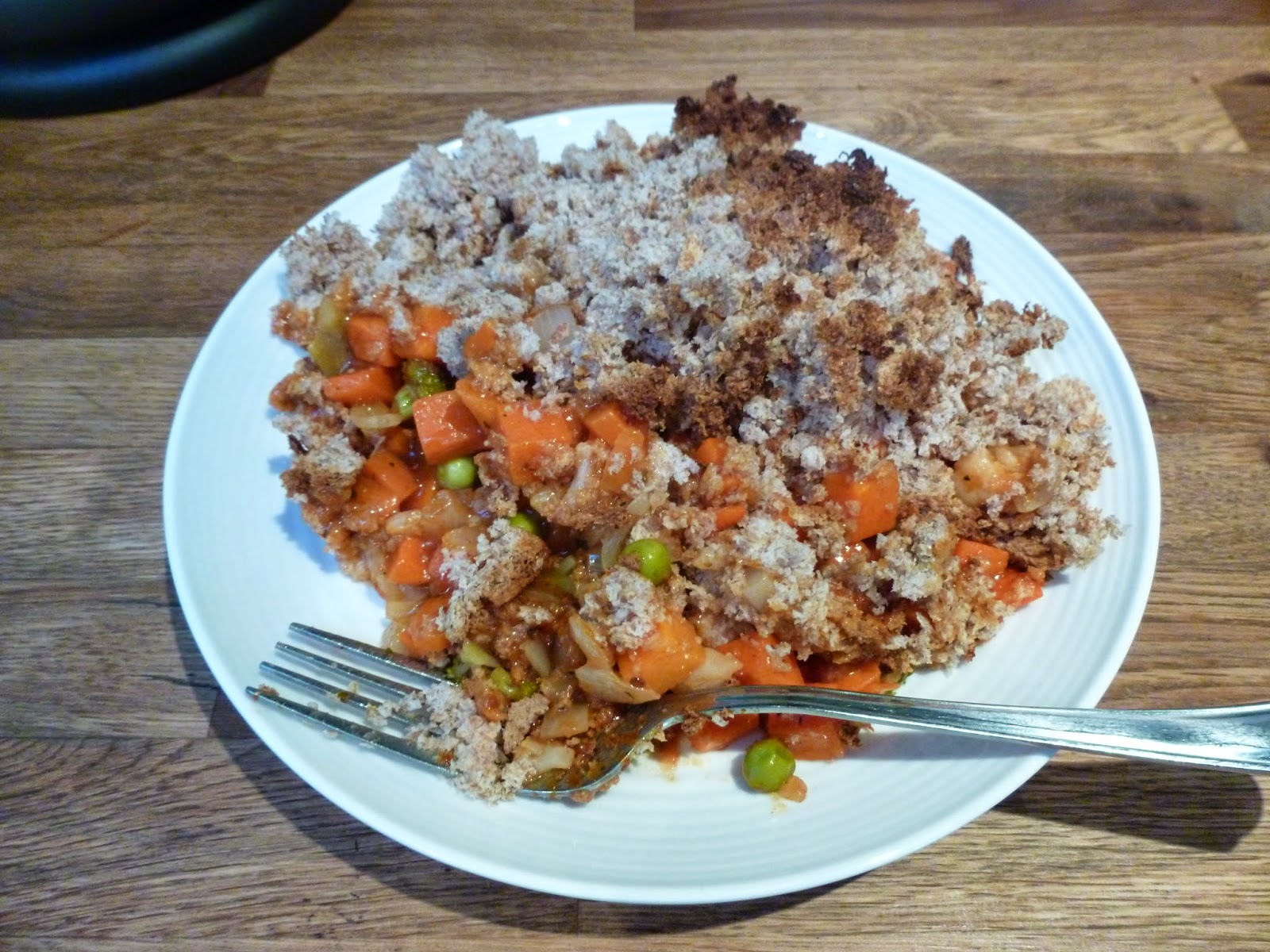 I was going to serve it with rice but there was so much there I didn't bother, as it was I couldn't finish it all off.  It wasn't very successful really, I think the sauce was just too overpowering and sweet for my taste,  I'm used to the more subtle taste of homemade sauce.
But it filled me up and that was the object of the exercise I guess. 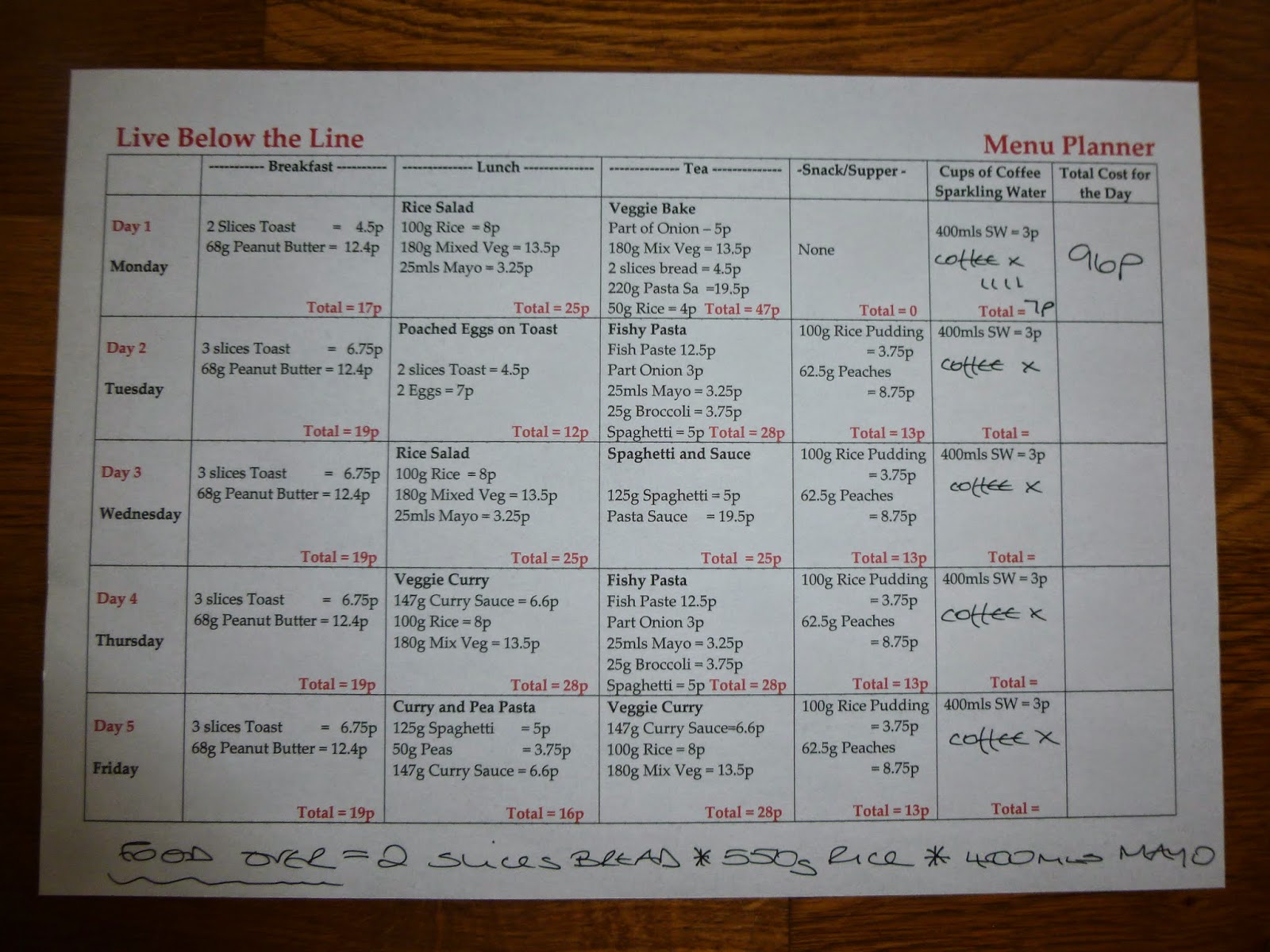 And then over a cup of coffee I worked on this plan of my foods for the week.
I really wanted it down in black and white what I had available for each meal, the foods, the quantities and the costings, because I knew from previous experience that if I just hazarded a guess I might be hungry some days and then perhaps left with uneaten food at the end of the week which would have been lovely to have earlier on.
Back tomorrow with my day two food.  Are you or is someone you know 'Living Below the Line' to fundraise this week?
Sue xx
Posted by Sue at 09:48

Labels: Live Below the Line