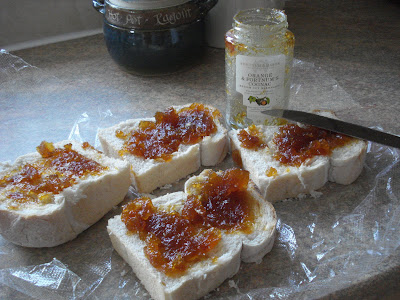 Fortnum and Mason Cognac Orange Marmalade on chunky doorstep slices of bread. Dipping into the pigs afternoon snack for a tasty bit of pear yesterday, as I strolled over to the barn, I came to the realisation that they are eating as well as us. 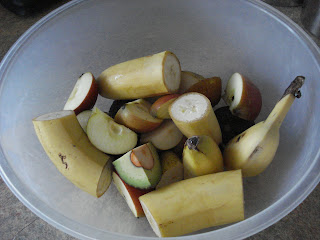 At the moment, as we have been unable to find a nearby greengrocers (we have no 'nearby' shops) that will give us unsold and unusable fruit and veggies, so I have been buying cheap packs of the same from the a large supermarket (yes, we did have a word with the manager there, and no, they "are not allowed" to donate unsold fruit and veg to anyone "it could cause foot and mouth disease you know"!! Instead they have been told 'by head office' to throw it in the bin. 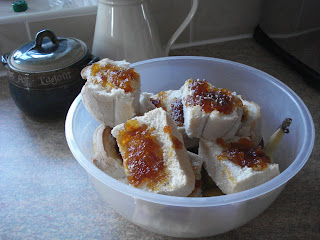 Topped off with marmalade on bread.......oooh yummy!
Hopefully thanks to our extensive veggie planting programme we will be in a better position next year to feed our pigs the veggies of their dreams for minimal cost to us. In the meantime however, I will continue to snack on their food and it does mean that the fridges are always full of a most delightful array of tempting fruit and veggies and Mr Cadbury is seeing much less of my pennies at the sweetie shop.
#
(FYI - the marmalade was seriously out of date and the bread was a few days old so don't panic too much..........however the pear was delicious!)
#
I'll be back on Monday, I have a busy two days coming up so will not be able to post, have a lovely weekend.
#
Sue xx
Posted by Sue at 07:25