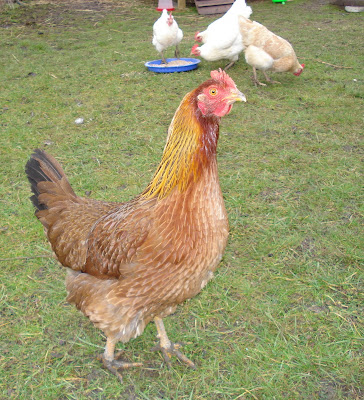 The farm is a quiet place today. Nutmeg, the chicken that thought she was a cockerel and strutted around crowing proudly to the world, especially after laying an egg, died yesterday.

I don't know what caused it, it could just have been heart failure, there is not a mark on her lovely body, but she was lying on the grass stretched out and dead to the world.

When I went out to put the girls to bed, Coco came running out of one house up the ramp into the other and then ran over to me in the rapidly fading light (when she would usually have been tucked up safe and sound), as though to tell me her sister was nowhere to be found. I gently scooped her up and popped her in the henhouse with her other two sisters and left them quietly chunnering away to themselves.

Who says chickens have no sense and no feeling. These birds knew their loss.