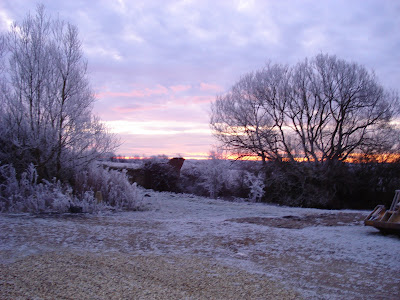 The sky was an almost scary shade of red as the night turned to day this morning, although the picture above was taken after it had taken on a more gentle hue. It originally looked as though the world surrounding the farm was on fire. It made the world seem somehow threatening and I'm thinking maybe it's a warning I should take seriously.
#
I will be thawing out the car and going to the shops later, although we have things over from Christmas, we are running short of essentials here on the farm. I need bread making supplies and milk.
#
While we are there we will be re-stocking Jason's University larder ready for our trip up the motorway to Preston at the end of the week. It has been nice having him home but the time has almost come for him to return to his studying and hard work. His Masters course is so much harder than his initial degree course and he has to put in many hours of research and work, so I think he has welcomed the brief respite that was Christmas here on the farm. 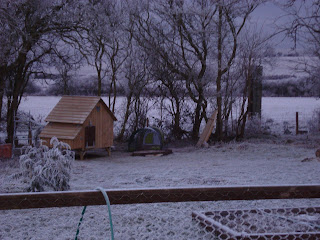 As I type it is 8.20 am and I have left the chickens in their little house for longer than usual this morning. They will be warm and cosy in there, snuggled together on their perches, once out they will be busy looking for food around the farm, getting colder all the time.
#
Yesterday I left the shed opened for them, silly, soft old me.....they found a hole in the bag of layers pellets made by a mouse and gorged themselves. Lovely Hubby will be looking at them in a whole new light if they put on too much weight, he is always joking about putting one of them in the pot......at least I think he's joking........!
#
Sue xx
Posted by Sue at 08:11