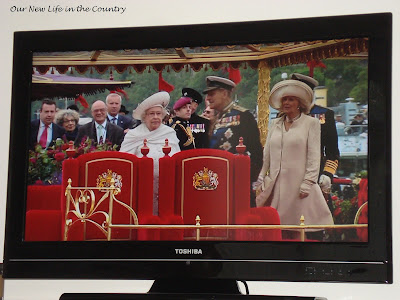 Yes, the weekend has been a washout.....but in the nicest possible way.  My brother and Mum came to stay on Saturday and we went for a lovely meal at a local eatery.  After a lovely evening of watching tele together and catching up on chat we all retired early.  It had been a long drive for them and a busy working day for us.

The plan on Sunday morning was for us to vanish briefly at the crack of dawn to do a Car Boot sale and then come back for a cooked breakfast together.  The rain had been steadily pouring all night and was still pouring when we all got up, so we decided on a nice cooked breakfast together all around the table before Graham set off up the motorway back to Manchester.  But we were thwarted by a power cut just as I finished laying the table. Lovely Hubby called the electric company and they said there was a serious fault in the area and power would not be back until around 11am.

So in true British style we raided the cupboards and fridge of all the breakfasty things we could find, a nice picnic style breakfast was then assembled of homemade jams and bread, cereal, fruit and yogurt and orange cordial to drink.

Just as we finished and were sat chatting the power came back on, just after 9am, clever repair men finished it nice and early.  If we had only known we would have waited.  So I packed Graham off with all the ingredients for a nice cooked breakfast for his tea instead!! 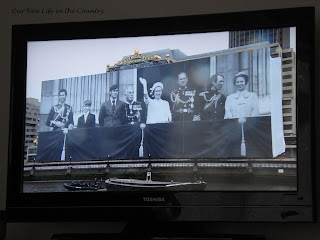 The afternoon was spent watching this.......The Royal Flotilla.  It started off very promising with the rain holding off but as our skies darkened here so did the skies on the television and the rain hit them hard.

We felt quite guilty sat in the warm watching the proceedings as the participants got wetter and wetter, but it was a brilliant afternoon...... 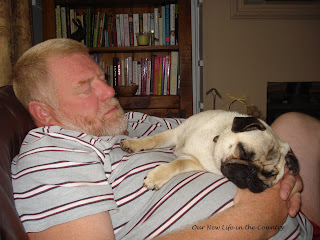 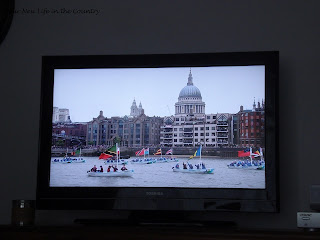 But still the little boats sailed on until the finale with the Orchestra playing and the singers singing for all they were worth on the last barge as rain poured down on them.  So patriotic. We do do events well in this country. 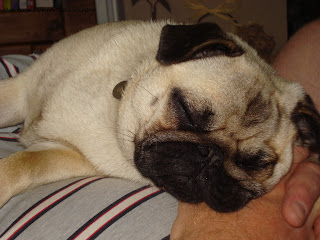 My favourite bit of the Flotilla, seeing the Queens reaction to the little War Horse tribute, Suky's favourite bit.....sleeping cuddled up to Daddy for 2 hours.

Hope you had a good Jubilee Weekend, we've been rained off the Car Boot Sale again today, so we'll have to unload the truck and do indoor jobs instead.