Slicing the Meat and Pocketing the Pennies 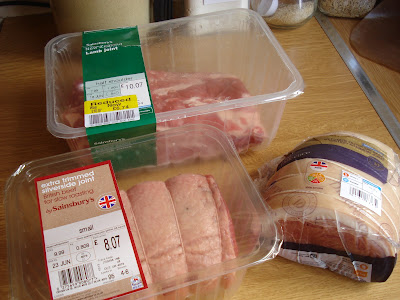 I mentioned yesterday that I went to the supermarket to stock up on meat for the freezer, so here's a little round up of what I bought.  The joints above were for cooking, as they all took around 2 hours to cook I wanted to fill the oven to get maximum benefit of the heat and cost. 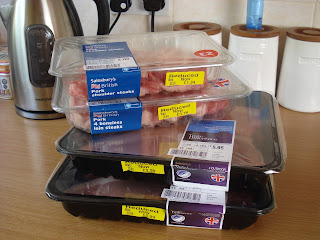 As it was Monday I got some good bargains, this is usually the case as the shops want to get fresher stuff on their shelves for the week ahead.  You do have to have the time when you get home though to process them in whatever way they need as usually the date is up on the day or only a day or two away. 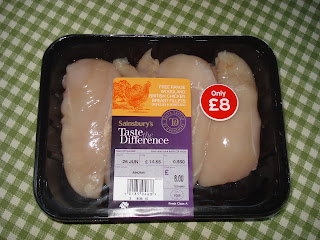 Some things were full price and pretty expensive at that, but you get what you pay for and I prefer (whenever possible) to either buy the highest welfare I can or not at all. 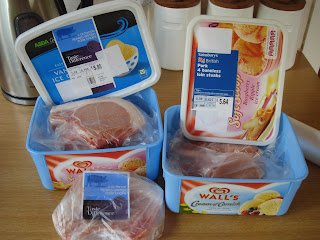 As soon as I got home the things that just required packing away into the freezer were processed.  All the chops and pork loins wrapped individually and then put into labelled reused icecream tubs.

The joints were popped into the oven and left to cook nice and slowly.  By the time they were done Lovely Hubby was home for work and he sliced up the Lamb Joint, some for his tea, scraps for the dogs and the rest wrapped and frozen once it had cooled.  The other joints were left to go cold and then popped into the fridge. 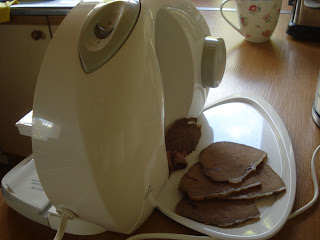 Then yesterday morning I got out my electric food slicer (I got mine from here and it has paid for itself over and over). 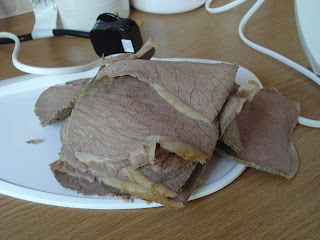 Because the meat was chilled from it's night in the fridge it sliced beautifully, lots of nice even slices. 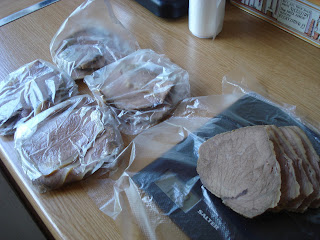 I wrap mine in Easyleave because I have a great big roll of it at the moment, but you can use whatever you have to hand, greaseproof paper, cling film, re-used cereal box inners etc. 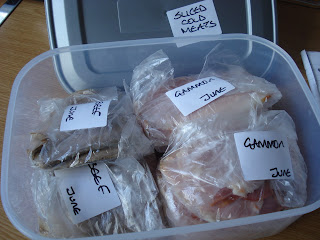 Once everything was sliced I labelled it clearly, although you can see what is in each wrap now it doesn't mean you will be able to recognise it once it has lived in your freezer for a while and got a bit frosty.

As I was doing all this I weighed and then counted out how many portions I had, to double check it was the right way to go.

This is just a sample of the facts and figures.

Watch out when buying the ready sliced meats in supermarkets the pack sizes vary so much, so always look for the price per 100g on the shelf edge sticker.

So my total haul of meat for the freezer cost me £41.91 and works out to make around 35 meals, so a cost per meal of £1.19.  (As I don't eat most of this only one portion is usually required per meal.)  So using home grown veggies straight from the Veggie Patch or from the freezer, or our own eggs etc  to accompany a pack of meat for each meal, this means that a meal for two averages out at less than £1 a head.  Just what I was aiming for.  I say around 35 meals because if I defrost say a pack of Gammon slices I may sneak a couple of slices out and use them in another dish, so that portion would in effect go into 2 meals creating even better value for my money

If you are wondering why I decided to go down the 'slice it myself route' (apart from the obvious saving in money) it was because when starting the Harcombe way of eating I discovered (by reading the ingredients lists of everything I bought) just what additives there were lurking in an ordinary pack of sliced ham or chicken.  Even when copntemplating buying the most natural looking product I found that it had additives to aid preservation, colour and taste, and it made me suddenly stop and think.  Be very aware though that even some of the joints I found had some extras added in.  So if you want to go down this route get used to reading all the ingredients lists, soon it becomes second nature.

Now that I have a good stock in the freezer I am switching back to using the local butcher, his meat is fresh, trimmed just the way you want it and you get good advice thrown in on cooking methods if you need it.  Oh, and another reason to use him is that I don't have to go back to the supermarket, and witness mass consumerism on a grand scale.