Nellie and Nora...or the Tale of a Lonely Chicken 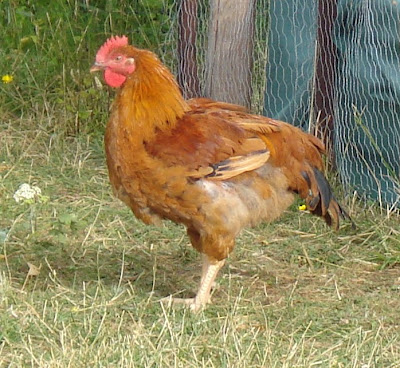 Sorry for the delay in posting this week, but yesterday whizzed by in a flash of outdoor jobs and this morning, just as I sat down to write this our new pick-up truck was delivered by a lone guy, so I had to nip him to the services so he can hitchhike to his next vehicle pick up (what a life eh....hitching up and down motorways to deliver vehicles all over the country).

~ Still I'm here now and I can finally tell you the tale of the Lonely Chicken. She's in the picture at the top of the post in her usual place just outside the Bantams enclosure, where she sits for most of the day. 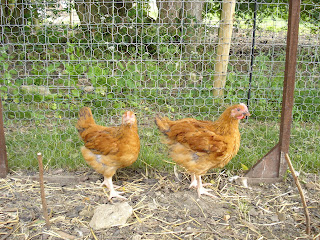 Nora and Nellie
We got Nellie and Nora, the New Hampshire Reds, from the farm dispersal sale we went to at the start of summer, as young 15 weeks old birds. They were tiny compared to the other breeds we bought and got mercilessly picked on during their first night in the henhouse. So we put them in with the Lavender Pekin Bantams who were roughly the same age although smaller.
~ 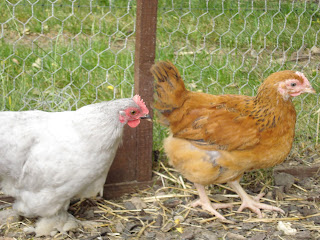 Caldwell and Nora
This worked fine and the five Bantams and two New Hampshire Reds got on like a house on fire. Nellie worried me from the start, she walks like a wobbly drunk, on legs that don't seem attached to her body properly. She was never in any pain so I left her to grow and made sure she always got her share of the food. Nora looked after her sister and they stayed together at all times. Nora walking slowly so Nellie could catch up, and stopping frequently so Nellie could sit down for a rest. They are huge birds and extremely heavy compared to all the others, they are designed to be meat birds as well as layers, and even the Welsummers who are large birds seem so light when compared to the New Hampshires.
~
Caldwell, the Lavender cockerel considered them to be his two large, ugly wives and rounded them up with his other ladies, as is his habit, from time to time. After a while though as they all grew (and in the case of New Hampshires, grew and grew and grew) space got tight in the Eglu and it was doing Nellie and her wonky hips no favours squeezing in and out of the door and being sat on at night, so we made the decision that they would have to learn to get on with the other 'big' birds. 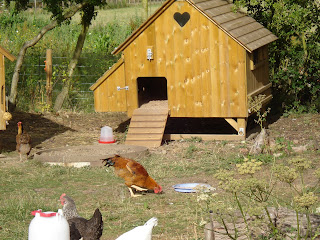 The move to the henhouse went fine, with them soon learning the routines of feeding times and bedtimes, and claiming their places on the roosting bars. They kept themselves to themselves and caused no fuss so they were quickly absorbed into the flock.

And then tragedy!
We were sat in the house one Saturday morning enjoying a late breakfast after all chores had been done, when Caldwell started causing a commotion, we ignored him at first as he is prone to hissy fits when his ladies won't do as he demands. But after five minutes his call changed and it was obvious he wanted something so we dropped what we were doing (chomping on scrambled eggs) and went over to see what was going on.
There on the ground directly outside the Bantam run was a New Hampshire Red......simply dead. No obvious causes, she had just keeled over and died. Caldwell was on his side of the wire looking sad and sounding cross, as if to say "see I told you there was something wrong". He could see we were suitably sorry, so he left matters to us to sort out. Of course we both assumed it was Nellie, her of the wonky legs and ambling gait, but then she appeared from round the corner and we realise it was Nora, the 'healthy' one.
~ 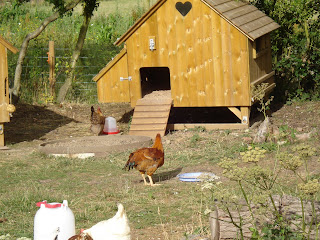 So Nellie is now on her own.

It's lonely being a wonky chicken when the others see you as a half of pair that lived parallel lives. She has laid claim to one of the nesting boxes to sleep in because now she is fully grown she is heavy on her wonky hips and prefers to sit whenever possible. She is always the first in at night to make sure she gets it, and the last out in the morning so no one pushes her down the ramp. She stands to one side as the mad scramble to the morning food goes on, and takes a leisurely drink while waiting for a clear route to her favourite place by the wire, so she can see her ex-husband and his wives get on with their lives without her.
~
We make sure she has plenty of food by dropping little piles of Layers Pellets near her when the others aren't watching, and on a hot day we take her an extra dish of water so she doesn't have far to wander to get a drink. She seems a forlorn bird in many ways but she has her routines and while she is in no pain I will let her live her lonely life, who knows one day we may get a bird who will get to know her and share her life the way her sister Nora did.
~ 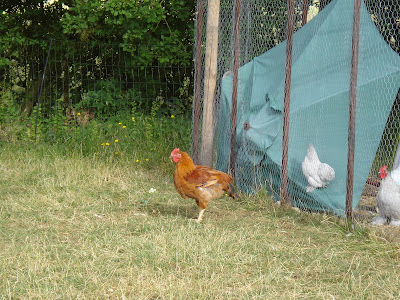