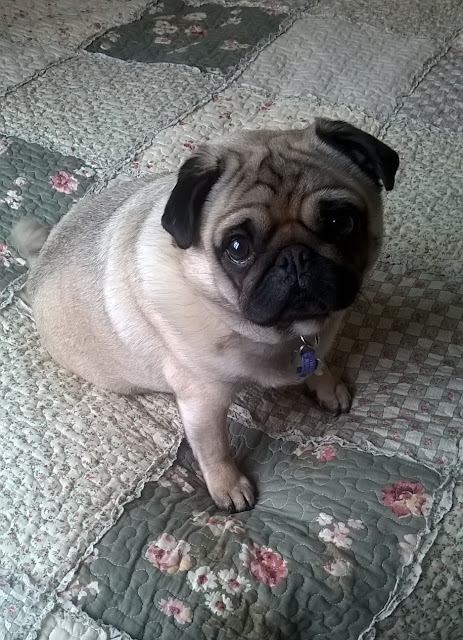 Warning this post has Pug Overload
... which will not be a problem for all you Pug lovers out there  ;-)

Back in April of last year I enrolled Suky in Tubby Club at the local vets.  It took me a while to get used to calling it that, I kept saying Fat Club by mistake .... but Suky didn't hear me !!

She goes most months for a weigh in and over the course of the last year has slowly and surely lost just over 2kgs in weight.  Her starting weight was 12.2 kgs and at her last weigh-in she was 10kgs ... the same as she was at the weigh-in before, and the only time she has not lost something.

She has never gone backwards in her weightloss journey and the nurse that runs the club loves her to bits and always grins at her consistently downwards pointing graph of weight loss. 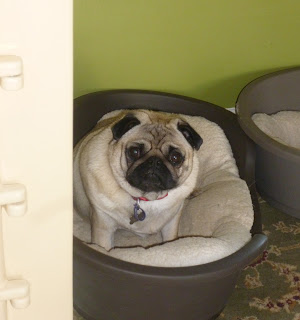 She used to look much tubbier, a little head on a big body. 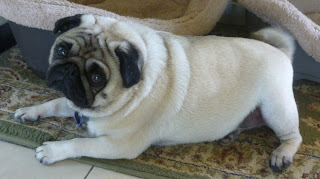 Now her rear end is much, much slimmer, although she still has the large shoulders her Mum had. 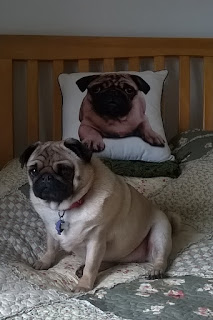 Which means if she poses for a photo like this she still looks a bit tubby. 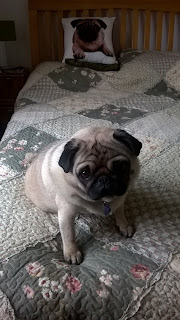 But if you get her more like this she looks as slim as she actually is.

I think she has about another kilo or so to lose to make her even healthier.  She is already much happier, well I mean she can scratch her own ears now and run all around the paddock, something she most definitely could not do this time last year ... and if you're a little Pug that lives with two energetic Jack Russell terriers you've got to try and keep up haven't you. 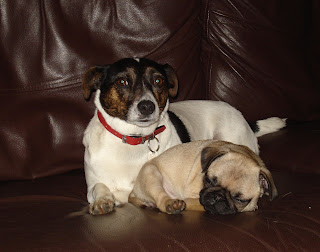 With big sister Rosy when she was 9 weeks old.

How did Suky get her name .... well Suky was born exactly one week after my lovely Mum in Law Jessie died in October 2011. She loved dogs that cuddled up to you and were happy to while away an entire afternoon in cosy cuddling, and would say to any dog that craved affection and cuddles 'you suky, suky little thing' and give them the cuddles and love that they needed, so Suky was thus called.  In memory of Jessie, and to let the world know that she craved love and attention.  And funnily enough I have just found out that Sukey (spelt with an 'e' in the Hebrew way means Lily as does my full name, now that's a happy coincidence!!