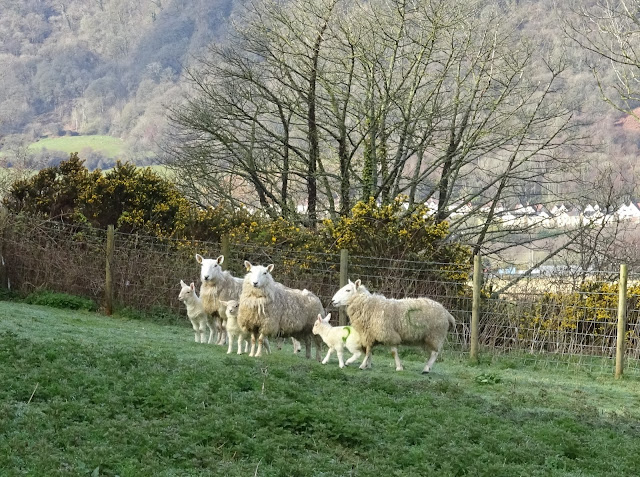 Will, the owner of the sheep currently in our little end triangular field admitted to forgetting what numbers he was up to in the numbering of the mums and lambs in his lambing shed, and wanting to get these three out of the shed and into our field to catch the glorious sunshine of last Sunday afternoon decided that A, B and C would do for recognition purposes. 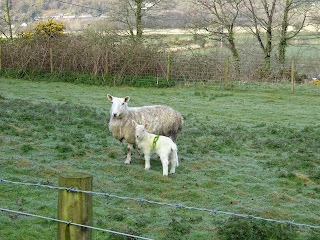 They are already turning into a friendly little bunch. 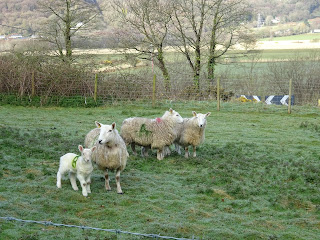 The ewes quite rightly were a bit perturbed by me and the dogs approaching on Monday morning, slightly less so on Monday afternoon and then by this morning .... 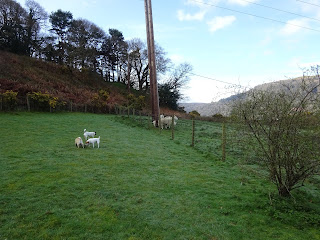 ... they waited at the fence to get a closer look at my motley crew of  little canine friends. 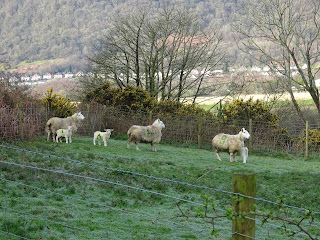 Once the dogs had been sussed out and given the once over the ewes and their lambs retreated to the far side of the field where I think the  mums could relax a bit more while we continued our lap of the paddock. What I will have to remember to do if Will either brings some more sheep and puts them into the paddock, or just moves this little gang over as the grass in the end field is eaten, is to snip off and move my Bramble pots.

We have lots of wild brambles (blackberries) growing alongside the paddock on the edge of our woodland, including in this corner (which had especially large and juicy blackberries last year) and as Lovely Hubby at some stage wants to clear a metre long clear strip behind the fence I was loathe to lose a source of free wild food, so I filled some pots with the earth from the mole hills and where the brambles were reaching over to root themselves in the grass of the paddock instead pushed the ends into the pots.

This is similar to how strawberries throw out runners and give you new strawberry plants for next season, so my plan is that once they have rooted I will transplant them to a permanent site alongside the fence separating the paddock from the orchard, and then we will be able to keep them small enough to be able to pick from both sides and interweave them along the fenceline to create a  prickly hedge.

We'll just have to wait and see if this little plan works out ... but it's worth a try!!