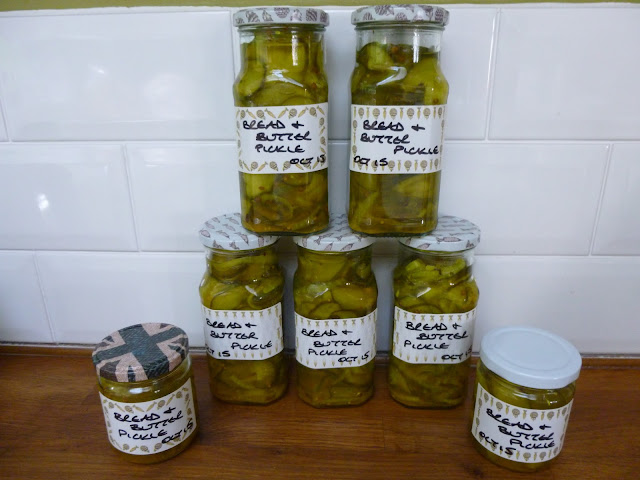 This month, and indeed most of last month has been all about preserving.  Taking what grew this Summer preserving it during Autumn, to be eaten in Winter .... and hopefully if successful and tasty it will be grown again next Summer. 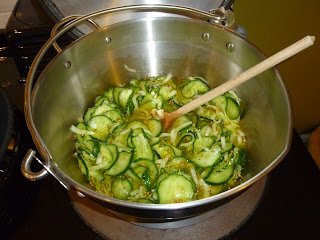 Fed up with jams I turned my attention to Bread and Butter Pickle last week just before the onions ran out, indeed this was why the onions ran out.  I've never made this before but it was so simple, I'll definitely be making it again.

Here's the recipe I used from the same Preserves book I've used for lots of my jams etc  (it's proving to be worth every penny this book).  If you click on the photo to enlarge it you will see it says '6 cucumbers (about 800g) thinly sliced',  my homegrown cucumbers were pretty big so I just got three out of the fridge, and got the other ingredients ready, then I weighed the cucumbers, the first one I put on the scales weighed just over 1kg all by itself .... it seems I'm growing whoppers this year ;-)

So I decided to double up on all the other ingredients and make a bigger batch of pickle. 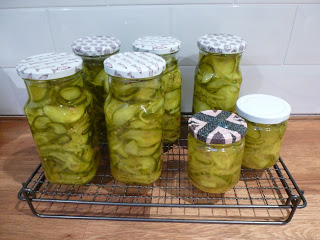 It was such an easy recipe and well worth doing, there's not many ways I can think of to preserve cucumbers for eating long after the growing season is over.  These six jars have added nicely to the store cupboard for the Winter days ahead.  I believe from reading around that it's called Bread and Butter Pickle because that's what it is traditionally eaten with.  Just the pickle on it's own with some good bread and butter.  Nice simple food ... my favourite sort. 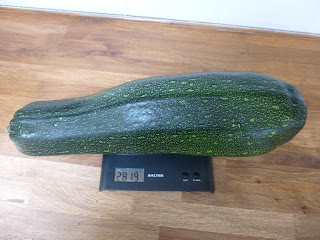 ... next I took one 'courgette' and decided to make a batch of Marrow and Ginger Jam. 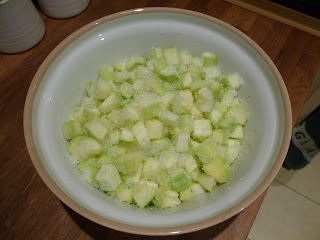 Making this highlights the amount of sugar used in jam making nicely, as the only ingredients are marrow, sugar, ginger and lemon juice ..... only I forgot the lemon juice!!

You simply peel and then chop the marrow,  mix it with the sugar and then leave it covered with a teatowel in the fridge overnight, by morning the sugar has brought out the moisture in the marrow and covered each piece with lots of little glistening crystals, it looks beautiful ... maybe it was admiring this beauty that made me totally forget to add the lemon juice.

All you do next is add the roughly chopped ginger in a muslin bag and heat slowly until the sugar all dissolves, then bring to the boil and keep at a rolling boil until you reach and stay at jam temperature. 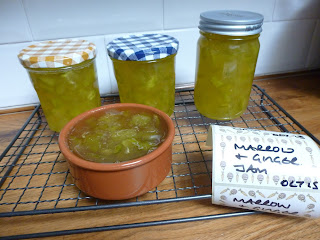 Anyway I didn't even realise there was no lemon in there until I gave the bit in the bowl a taste ..... yep ... it's sweet. 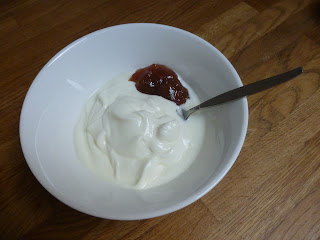 But I soon found a way to enjoy it .... as a fruit corner, the tartness of the yogurt balances it out nicely ..... phew!! 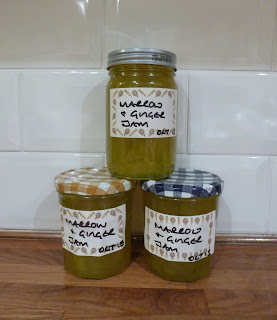 Labelled and ready for the cupboard.

It's been a busy couple of weeks, but opening the cupboard door and standing and admiring all my handiwork makes it all worthwhile.