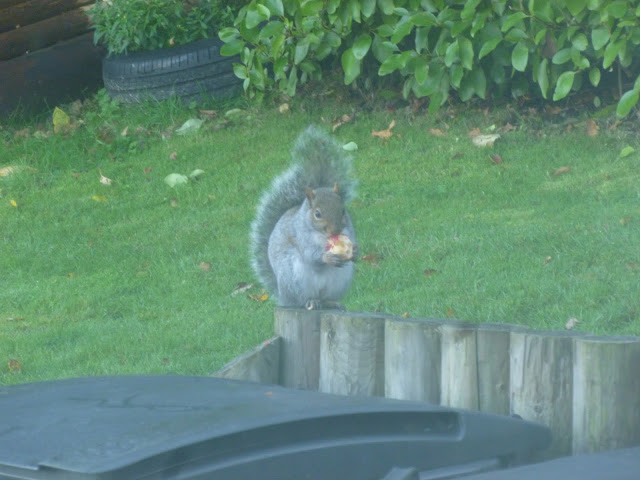 The clocks going back an hour at the weekend has normalised my days more.  Getting up as it goes light is natural for me, and for most other folk I assume, except poor shift workers of whom my son is one.  It must play havoc with your sleeping patterns if your working day alters on a rotating shift pattern, I know it does for Jason, who when not at work is either at the Gym, or crashed out on his own sofa snoring for England.

Anyway me and the dogs were up bright and early yesterday morning, so early that as I was putting on my jacket and pulling on my wellies ready for the damp and chilly morning circuit of the paddock, I glanced out of the window and caught this little chap still having his breakfast. 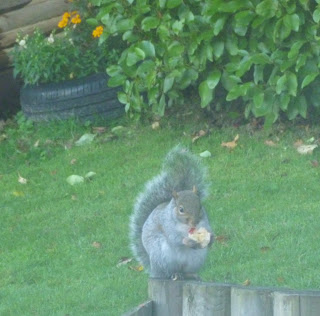 I got the camera off the shelf in the kitchen and he was still tucking in when I came back and took this shot.  He carried on nibbling his way around the rosy red apple that he had clutched in his tiny little paws just looking so cute I had to stand and admire.  Wouldn't you love a fluffy tail like that to keep the draughts off your back while you sit eating a fresh apple.

The dogs were getting restless, after all when Mum has her jacket and boots on it should mean the door magically opens and they can run out into the fresh air ..... not stand waiting in the conservatory. So when I saw the squirrel had virtually finished his tiny apple I made a noise with the door handle, which of course sent the now over excited Rosy into a frenzy of barking, which Mavis soon joined in with and this gave little Mr (or Miss) Squirrel time to make a swift exit completely unseen by my excited little canine companions, back to the safety of the apple tree and with no doubt chance to choose the apple which would make the next meal of the day. 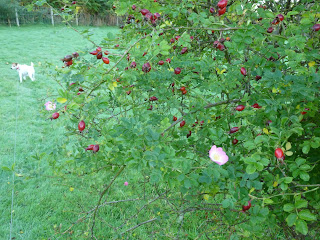 Walking round the paddock I was surprised to see these lovely little Dog Roses flowering on the bush that is full of Rose Hips.  I don't remember ever seeing both on a bush at the same time!! 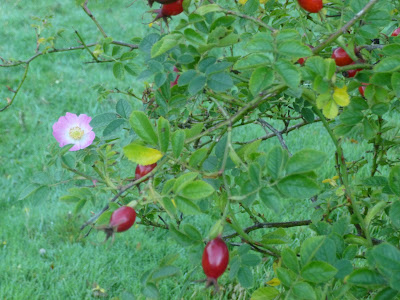 So pretty on this cold, damp October day.

I could have harvested some of the Rose Hips and made a syrup, but I thought that this year I would leave them all for the wildlife, we have plenty of stores this year.  Maybe I'll have a go next year.