Just one day later we have 45 solar panels in place and ready for action, and the only worker left on site is Rob the painter, all by himself painting in the workshop.  I had to nip into Llandudno and get him two more 10 litre tubs of masonry paint this morning, he had used up the five we already had.  I was shocked to find out they have gone up from £35 each to £43 each ... an £8 increase in just a couple of weeks!!

The top photo was taken on the panoramic setting on my camera, it kind of makes it all look a bit weird but shows the garage and workshop roof in relation to the things around it. 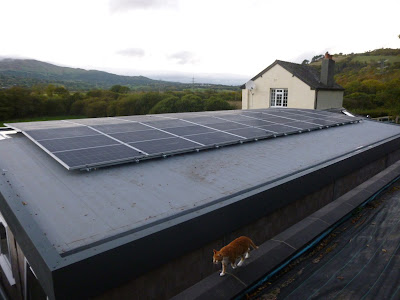 Then I backed off up the hill a bit more and got this one, which makes everything look much more normal  :-)

The animals seem to get into most of my photos don't they, I really didn't see Ginger approaching until I clicked the camera!!

I was asked yesterday if we will be off-grid now we have these panels.  Well once these are connected they should be supplying all our needs electricity wise, we have also installed a battery backup system that kicks in when they aren't generating any electricity for any reason (night time, excessive fog etc) and the workings out show that we should also be generating enough power to be able to feed it back to the National Grid to generate a small income.

Lovely Hubby is a stickler for workings out and planning ahead, it's the engineer in him,  and now this system is in place he's worked out that it should pay for itself completely in the next ten years and then give us some completely 'free' years of power before we sell up and retire to a love nest by the sea.  After all even Hannah Hauxwell gave up her rural lifestyle before it finished her off completely  :-) 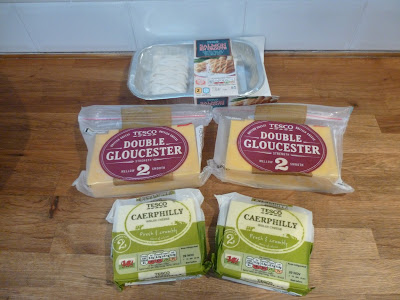 Yesterday on the way back from Mums I called in to Tesco to pick up some dried dog food and of course I had to have a quick glance at the reduced to clear shelf .... 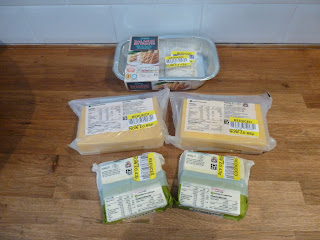 I was in luck.

Four packs of cheese at much less than half price and a pack of two Salmon En Croute, saving me a total of £6.66  (oooh the mark of the devil).  The salmon went straight into the freezer and I'll grate the cheese later on today and do the same with that.