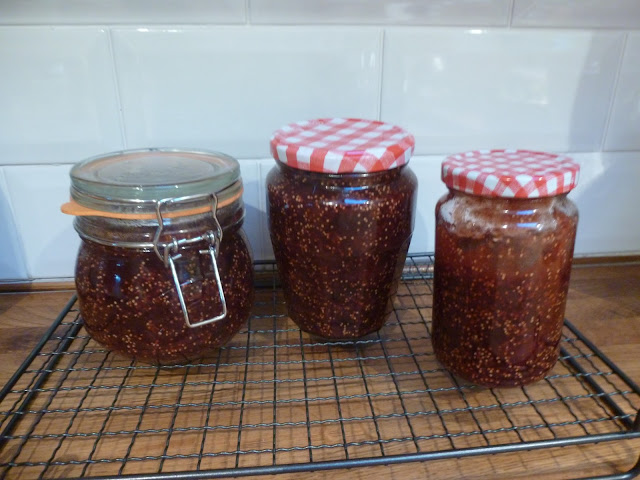 When it came down to it I couldn't be arsed bothered going to the shops the other day for onions so I could make the Fig, Onion and Date Chutney, but when I looked at the figs in the fridge one of them was showing distinct signs of developing a furry overcoat.  Quickly separating him from his friends I checked them all over.  They were mostly pretty ripe and looked fine to use ... if I used them straight away.  So I gave the offending chilly fig a good trim and set to to make a small batch of Fig Jam.

Which goes to prove that it's the texture of fresh figs that I really can't tolerate, I must try some alternative mushroomy things to see if I can get over my dislike of them too.  I hate being a fussy eater, and when you don't eat meat, are limited on anything containing milk, cream or wheat and also hate mushrooms it's starting to sound like I am.

Anyway, I got two big jars and a half jar, from my kilo of figs, the half jar will obviously have to be eaten straight away as you shouldn't have  jars with any air in them or even space for air, it allows mould to develop much quicker.  No hardship ..... this one can live in the fridge along with all the other half jars and bowls that have been produced recently. 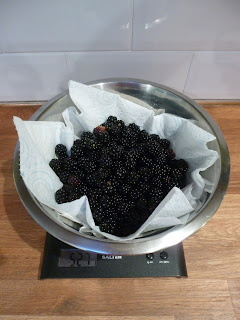 Then although I said I wouldn't pick anymore blackberries after the last lot, I picked one more bowlful last week.  The sun had been out all day and walking the dogs round the paddock just after tea I saw that the bush that has given us the biggest and juiciest blackberries was once again dripping with a fresh crop.  I quickly got a plant pot from the polytunnel and set too picking the biggest and the best.  As you can see I managed another half a kilo.  They were washed, open frozen and then bagged and put back into the freezer. 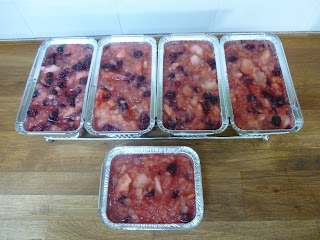 Yesterday I decided the last of the windfall apples had been clogging up the fridge space for too long and decided to make up another batch of Crumble/Pie/Cobbler base for the freezer with them ... we have more than enough jam in the cupboard now so this wasn't an option.  So once the apples had cooked down to a chunky mush I tipped the frozen berries into the pan and stirred it all together.

Et voila ..... another five trays of fruity goodness preserved for the cold, dark days of Winter.  Now all I have to do is somehow shoehorn them into the freezer and we are sorted :-)