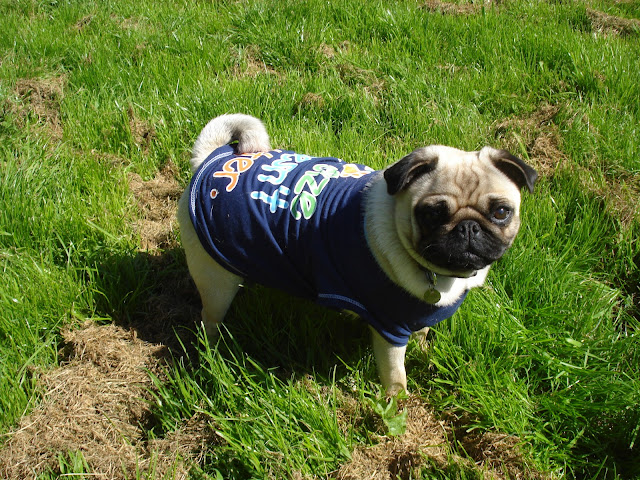 Just for Mum, pictures of Suky in her little t shirt after her operation on Tuesday.
﻿ 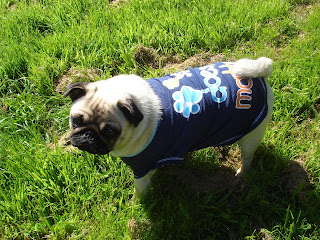 She didn't mind wearing it at all, if she had had to have a cone bucket thing on her head afterwards she would have been a lot more upset.  When Rosy came home from being spayed a couple of years ago and had a cone on she was terrified of it, I remember the look of fear in her eyes, and her relief when Lovely Hubby took it off her and lay her on the sofa, she fell asleep straight away, so I would never do that to a small dog again.  I bought Rosy a little t shirt to wear instead the very next day and she was fine and left her stitches alone completely. 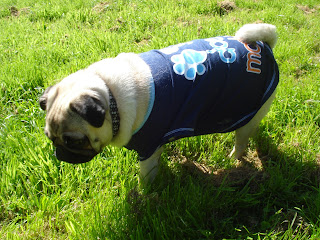 So it was a no-brainer to go and buy one for Suky as soon as we booked her in for her operation.  I did feel a bit strange buying 'doggy clothes',  I bet the young lad that served me thought, "here's another daft woman who dresses up her dog everyday".  But it's served it's purpose and it gave the vets and nurses a good laugh with the words on it .... 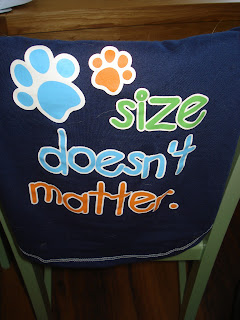 ... especially as we had just been told that Suky is OBESE.
She's on a diet, it started last week before we took her to the vets.  She weighs in at a huge 9.5 kilos and she has to get down to around 7 as soon as possible.  So no little treats, no bacon rind off LH, no sharing his biscuits with her and we have to be super vigilant at feed time, as Rosy is not a good eater and sometimes only has a nibble at her tea and then walks away, as soon as Suky has cleaned her own dish she makes a start on Rosy's if we're not careful.
She's much better today and we have just got back from her post-op check-up, her stitches come out a week on Monday and then that's it.  One happy little dieting doggy.
Sue xx﻿
Posted by Sue at 12:45