Not Spending in September 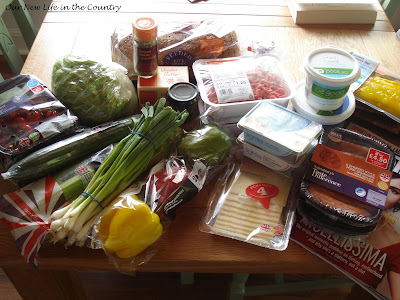 The not spending in September is going pretty well, last week I spent £32 out of my housekeeping budget, so that's the £18 saved straight over into the £2012 in 2012 fund, which is also doing pretty well. (Added in - I just remembered I also spent £2.69  on a coffee at the motorway services at the start of last week, so that's a bit less to the fund!!)
I had a voucher for Sainsburys so decided to top up the fresh stuff from there.  The cheapo mince is for the dogs, two packs mixed with the other cheapo ingredients for homemade dogfood keeps them in food for 6 days at a cost of just 23p per meal, a bargain and I know they are getting good food.  On alternate days they both love cheapo tins of tuna mixed with either a slice of bread or their usual dog mixer.
The freezer is starting to look bare, but I think we should be able to see this month out and maybe even into October before we run out of meal ideas.
I love the feel of not shopping so much and of course it gives me more chance to actually have a sit down and read through some Blogs........ when my computer will let me!!
Everything seems to be working at the moment, thanks to Lovely Hubby spending virtually all of yesterday fixing things, it's a good job it was raining or he would have been sulking, he's halfway through painting his man shed..... that lovely shade of green that we both love so much, and rain unfortunately had stopped play yesterday just before the computers went on the blink.
Sue xx﻿
Posted by Sue at 13:05

Labels: How Low Can You Go Challenge, Not Spending in September