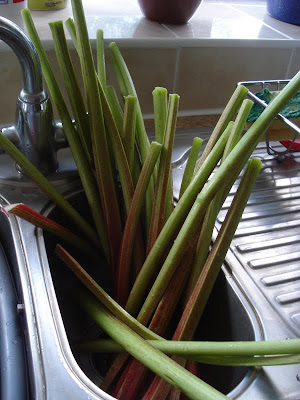 Gorgeous rhubarb.  At last it's turning red and I've harvested about a third of it.   We have been eating it for a couple of weeks now and it's been really tasty but it was green and it just didn't seem to want to go red.  But once I spotted the change I decided to start freezing some of it for use later in the year. 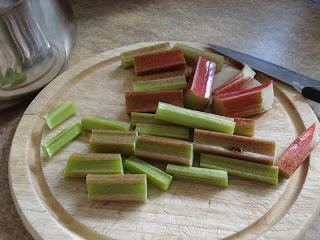 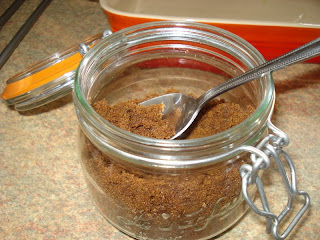 a spoonful or two of brown sugar seems to sweeten it better than white sugar, and I use as little as possible just enough to take the sour 'edge' away.   Cook it in the tiniest bit of water, the water left on it from the rinsing is usually enough. 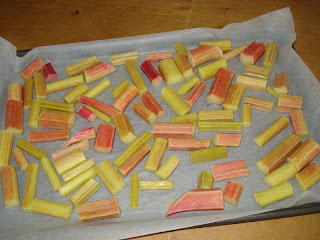 After about 3 mins of cooking simply drain in a colander or sieve and spread out on parchment paper. 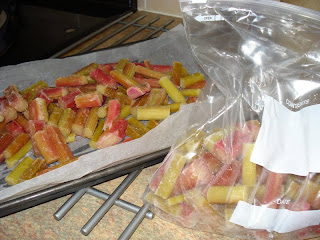 Pop into the freezer and couple of hours later it will have frozen enough for you to tip it into freezer bags, because you have frozen the pieces individually they won't clump together and you can tip as much or as little out as you need to use at a later date. 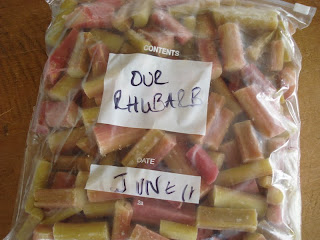 Always, always label everything, I used to have so many unidentifiable things in the freezer....UFOs....Unidentifiable Freezer Objects!!  Especially the date so you can learn how well your own things can be frozen for.....I'm finding that it's a lot longer than you think!
Sue xx
Posted by Sue at 08:03