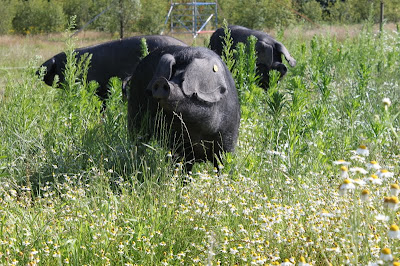 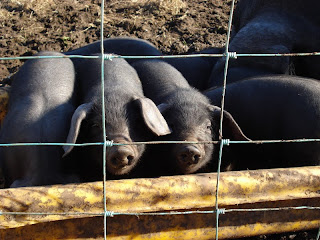 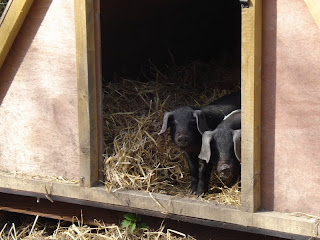 We felt like parents sending their children away when they left the farm this week.  They trusted us and we felt we'd let them down.  Then we get a phone call to say that Lulu is settled in well and has made her home ready for her babies to be born.  Then yesterday we get the picture at the top of this post, along with others showing more of Jack, Lottie and Liz's new home, grassy pastures surrounded by woodlands. 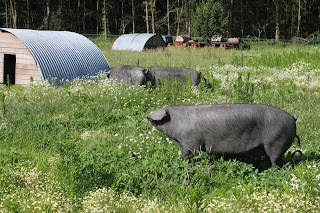 The lovely folk that picked them up took loads of pictures, documenting the loading, unloading and the fun and games in trying to move a 30st boar in a direction he's not keen on going in.  Luckily Lovely Hubby is a strong man and Jack is a friendly boar.  Henk and Annemie who are the new owners were amazed at Jacks lovely temperament.
Now we feel we can take a deep breath, like parents who have raised their children well and sent them off into the big bad world with the knowledge to live their lives well, we feel in a small way we have done the same for our pigs.
Jack, Lottie, Liz, and later Lulu when she joins them, are forming the start of a breeding herd of Large Black pigs in the Netherlands, supplying rare breed quality pork and keeping their rare bloodlines going.  Animals reared the natural way.  Henk has had to work miracles to get permission to do this, animals are not permitted to be kept outdoors in the Netherlands, something I knew nothing about.  He is breaking new ground and bringing a better quality of life to farm animals and educating people on what their meat should taste like through his restaurant.
We are so happy to be a part of this.
Sue xx
﻿
Posted by Sue at 09:48