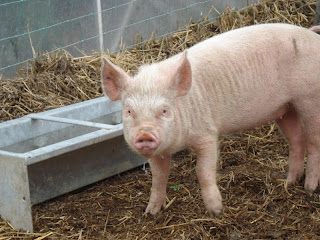 Certain little piggies were giving me the runaround yesterday.  Sophie, the Border Collie was in true 'Lassie' mode.  Every time they got out of their enclosure she came in the house to tell me.  They went back no trouble but in the end the fence that they were getting over was in no state to be fixed anymore, so it was decided after Lovely Hubby came home from work that we would move them to the Orchard. 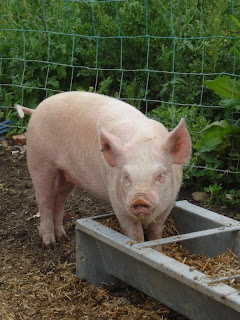 We were going to do this at weekend because these Middle Whites are only four months old and new to the farm so we haven't had time to fully bucket train them, so we thought it might take a bit of time and a lot of persuading.  But they showed us their intelligence last night when they followed and indeed, ran ahead, to their new home, straight to the only unoccupied pen and stood waiting expectantly by the food trough, all in under 10 minutes. 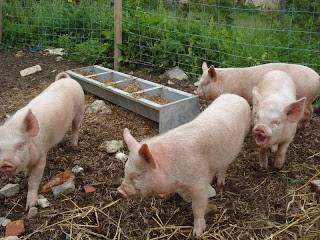 Clever little piggies.  They certainly look happy enough to be giving me the runaround!
Sue xx﻿
Posted by Sue at 10:53