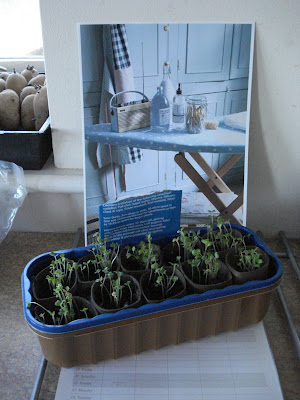 Mixed salad leaves.
Signs of new life are popping up all over the place now. Bulbs are appearing in places that we least expect to see them, the little chirrups of baby birds can be heard from all the trees and parent birds are in a feeding frenzy. Two birds are attempting to build a nest in our working chimney and I have to light a mini fire each morning to discourage them.
Our farmhouse kitchen is not the idyllic tidy place it could be at the moment, we will have to do something about this as my much longed for kitchen table has now been made and is being delivered on Friday along with four chairs and a bench........ooo.....the anticipation!! 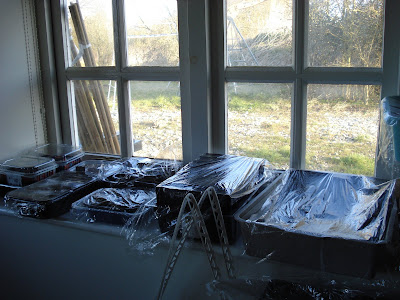 Half the kitchen window sill.
My seeds are starting to germinate on the kitchen windowsill at an alarming speed. We have planted most of the veggie seeds into halved toilet roll inners so that we don't disturb the roots when we plant them outside. The cardboard tubes rot down very quickly leaving the baby plant in its own little ball of compost and nutrients, not quite such a shock to the system for the plant. 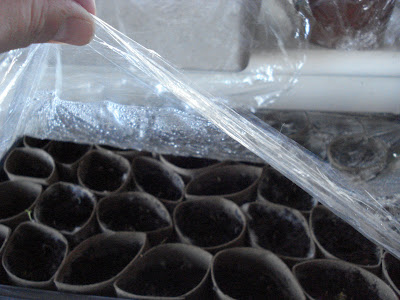 Peeping into one tray.
We have lots of people saving these rolls for us, some of them think we're very strange, but I'm sure a few will latch onto the idea for themselves when they taste the yummy vegetables at the end! 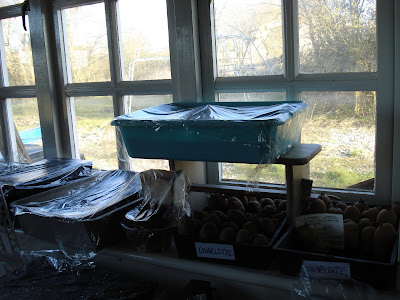 The other half of the same window sill.
But in the meantime all available windowsill are being pressed into action for germination of seeds and chitting of potatoes. Decorating is on hold as we are preparing raised beds for the potatoes and onions (also sprouting merrily away on the utility room windowsill). 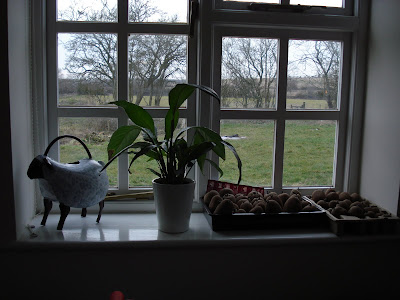 Tomato plants will most likely remain in the house on the upstairs landing windowsill as we will not have a greenhouse until later in the year. Thank goodness for such a light filled house and large deep windowsills!! 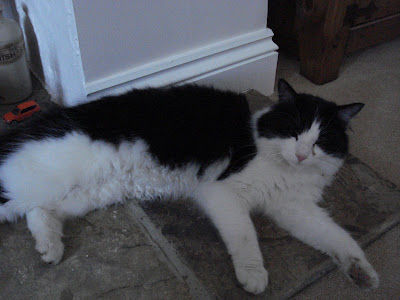 Archie posing on the hearth, just begging to be photographed!

Have a good day.