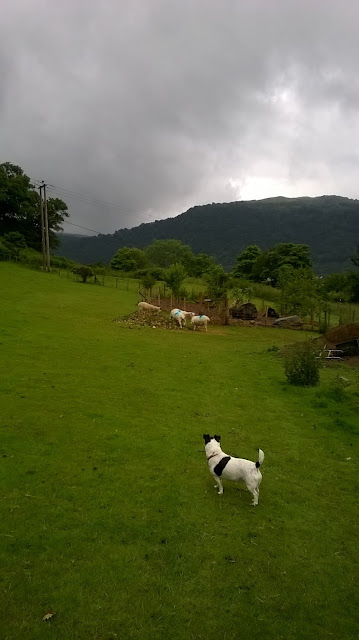 Another load of chippings was dropped off  by the tree surgeons the other day and straight away the sheep were all over the pile.  Picking out tasty titbits and enjoying the warmth that generates from it as it quickly starts to rot down.

Rosy is standing well back from the sheep and just watching them while I take the photo, because like the other dogs she has been 'told off' by the head sheep just once too often and has now developed an aversion to all woolly white things that live with us.

They are a lovely friendly bunch to me and come over for a head scratch when they see me but they don't like the dogs, and I think they quickly realised that if they got the upper hand early they would be left in peace.  They have told both Rosy and Mavis off in no uncertain terms, and little Suky who was desperate to make friends and stood staring at them for a long time, was head butted and flipped over ... she hasn't gone anywhere near them since.

I was walking with the dogs at one end of the paddock the other day and all the sheep took off towards the gate near the polytunnel at great speed, I wondered what on earth they were up to and then I spotted Ginger sat just inside the gate .... he was very soon sat on top of the gate post with a fearful expression on his face!!  All the sheep could do was to sniff at his twitching tale dangling down.  They were very interested to meet him but he wanted none of it ... well I suppose there is quite a size and number differential!! 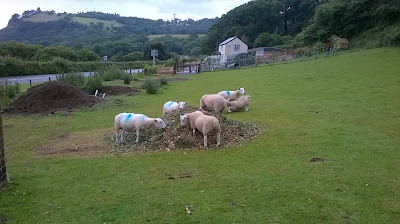 Each new delivery keeps the sheep entertained for a while, and then the dogs get to have a good sniffing session, it also means that there is more for us to put around the place, I think making paths through the woodland will be one of our next jobs with these chippings as Nut Wood and the front flower bed are now full to capacity.