In the Tunnel on a Rainy Day 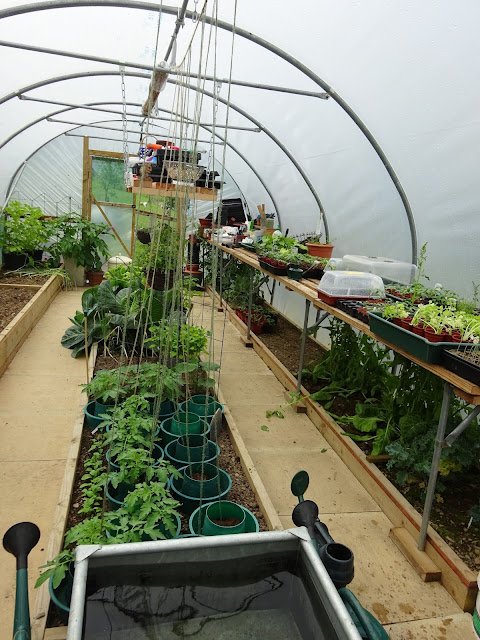 Yesterday the builders finally arrived to start the process of cleaning up and repairing the house after the awful Winter downpours of a few months ago, that saw one side of the house letting in water above all the windows.  Their first job was to wash down the roof with a pressure washer so the state of the ridge tiles and slates could be checked properly.

Rather ironically Mother Nature decided to give them a hand,  and after just a couple of  hours of working and with only two thirds of one side of the roof cleared of moss and debris the heavens opened in spectacular style.  A good rinse for the roof but not safe for being up there for the chap at the top of the roof ladder, so tools were downed and everything was cleared away, hopefully they'll be back on Monday to carry on.  Of course it cleared up for a couple of hours just after they'd packed everything away such is weather here on our wild Welsh hillside!!

While they were busy outside I was tucked up safely and dryly, if rather noisily in the polytunnel, weeding, potting on and doing all the other little jobs that needed doing. 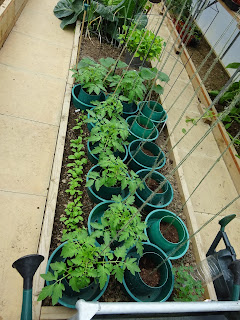 I swear sometimes that I could be out there all day everyday and never actually run out of things to do. 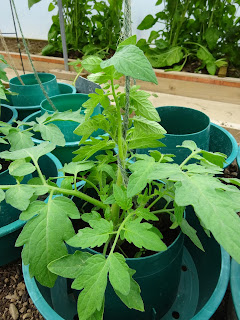 As you can see the tomatoes are coming on really well, it doesn't take much warmth and sunshine for teeny, tiny little tomato seedlings to put on a spectacular spurt of growth and they are making good use of the strings that are this year taking over from the bamboo canes in the polytunnel. 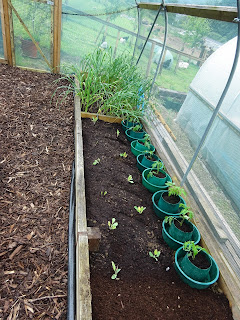 I have planted some of the excess of tomato seedlings into the net tunnel so I can compare the two growing temperatures.  I am also considering  having a couple of the plants out on the hillside planted in the warmth of an old tyre just for an experiment, although I doubt they will do as well, we are quite exposed here.

In front of the tomatoes in this net tunnel bed are my ordinary Cauliflowers, I was going to add some Romanesco cauliflowers to the side of them in the same bed but when the heavens opened I got pretty wet and had to retreat to the polytunnel, before giving up completely and coming in the house to change clothes and grab a cup of coffee.

Today although still looking very grey it is a lot drier and Lovely Hubby is out cutting grass and having a general tidy up of all the green areas, of which we have lots.  After finishing this post I'll be going to clean out the henhouse and then back to polytunnel pottering, as I said there's always something to do.

Have a good weekend everyone, and lets hope for some more sunshine.