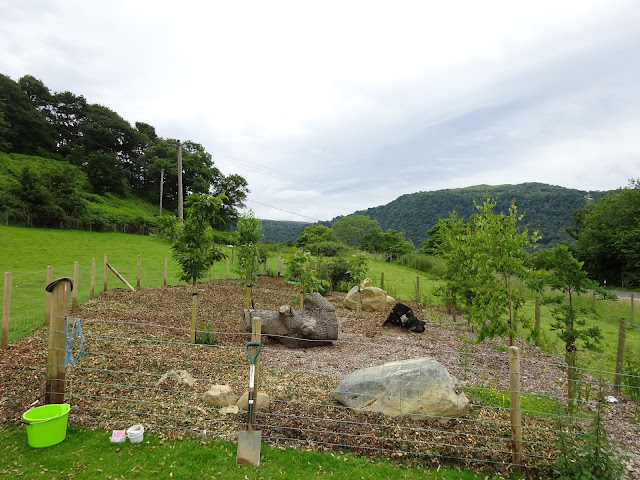 This weekend's main job apart from all the other little jobs that fill our days was to finally finish off Nut Wood.  It's in the corner of our main paddock and is so called because most of the trees planted in there are nuts.  My nickname for it is Nutbush City Limits ... but Lovely Hubby gave it it's sensible name ;-)

In fact in there we have three Oak trees, three Birch, two Sweet Chestnuts, two Almonds and four Walnuts.  One day, hopefully, we will get a glimpse of what it will become after our lifetime.  It should be a wonderful heavily wooded area, in the meantime we are continuing to make it into a wildlife haven on a much smaller scale. 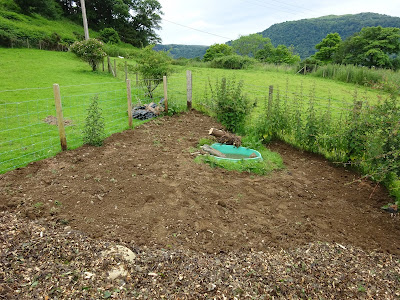 Yesterday this area was raked and had lots of flower seeds scattered onto it, a mix of flowers and wildflowers that will be allowed to run rampant and set seed.  It should be a haven for all sorts of bees, insects and other types of creepy crawlies.  The bushes that were already here and the nettles along the fence are staying, and I have a few Borage plants that I will transplant into here in the next day or two. 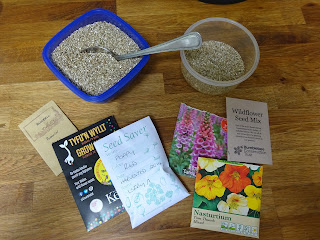 The old plastic paddling pool that we found here when we moved in, has slowly filled with rainwater and is half buried in the soil with grassy edges, inside it there are rocky ledges and a ramp to help creatures that fall in climb out again. 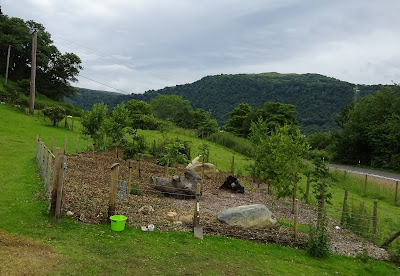 Talking of climbing I climbed onto one of the soil piles to try and get a higher shot to give you an idea of the whole place. 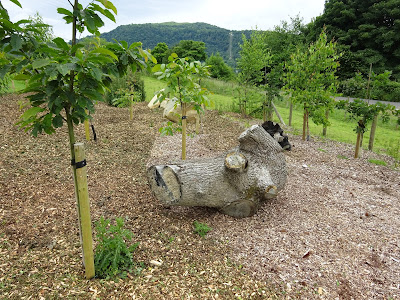 As well as the huge boulders that we excavated when we dug back into the hillside for the garage and workshop, there is a huge chunk of the old oak tree that we had to cut down when we moved in.  These are already proving to be little wildlife havens, each in their own way for small creatures and insects.  The black charred stump behind the oak was found on an old bonfire site when we moved in and was put in here for it's unique ability to attract things. 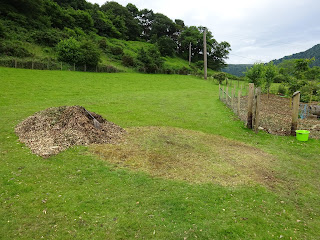 The chippings had been piled high over the whole circle of flattened grass that you see, Lovely Hubby moved it mostly with the tractor, tipping it over the fence from the front bucket and then raking it all out, but the last loads he filled wheelbarrow and wheelbarrow full of and moved it to where he wanted it. 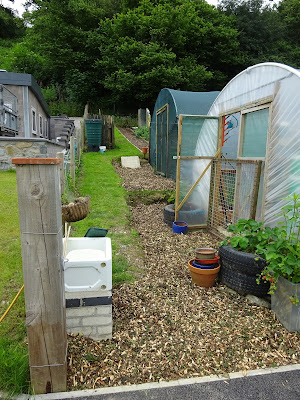 Including all around the doors of the poly and net tunnels.

Everywhere was looking so much neater until some of the chickens got out again and started rooting around in the chippings for bugs. The last I saw of Lovely Hubby he was chasing two chickens up the hill brandishing a sweeping brush and shouting 'get back to where you should be you little f***ers'.