No Longer a Vegetarian? 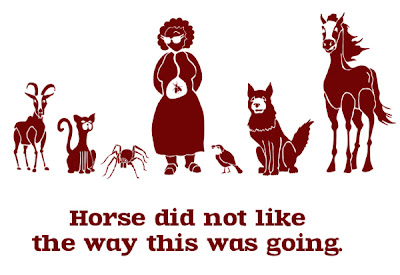 I was minding my own business walking round the paddock with the dogs, throwing sticks for Rosy, getting exited when she brought them back to try to encourage Suky to have a go, she really doesn't understand this throw and fetch game, she will run after whatever you throw and then just sits looking at it until you get there, as if to say 'here it is Mum, do you want to do that again?", I was laughing when Suky rolled and rolled in the grass, like a little chubby chipolata round and round, just for the sheer joy of it ....  for once there was nothing yucky to actually roll in!!
I was obviously getting carried away with the shouting of encouragement and the laughing, I swallowed a fly!!
It came right at me, it and I didn't stand a chance.
It took hours for the feeling where it had hit the back of my throat to go away and copious amounts of water and cups of coffee.  I usually apologise to insects I accidentally kill, but this one did not get an apology, he should have been looking where he was going!
I guess I'm hard pushed to call myself a vegetarian if I'm consuming living creatures!!
Sue xx﻿
The picture at the top of the post refers to this old nursery song, I used to sing when very small and that popped into my head immediately after the event!!