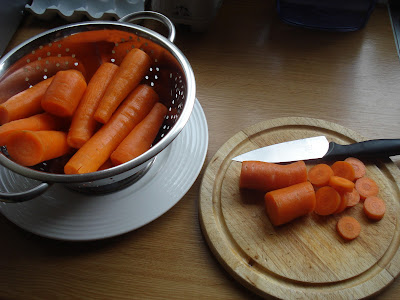 In this process of using up the foods we have, before buying anymore you'd expect the freezer to be emptying, but during this first week of my challenge it's proving quite the opposite.
I decided to concentrate on using up food from the fridge and the worktops this week, to get food that that would go off either used or stored in a better way before it could, and to get food that is lying around the place looking messy gone and the surfaces clear. 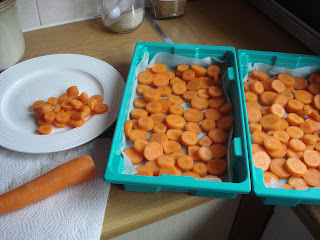 Carrots from the fridge were washed, chopped and open frozen before being tipped into boxes.
﻿ 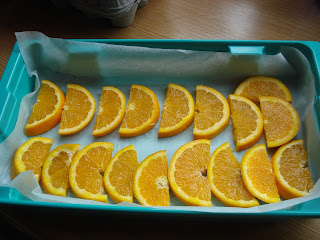 Likewise two oranges that were in a gift hamper were washed and sliced and then open frozen in half slices. 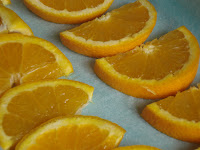 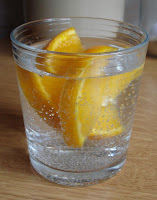 ... but in a long cool drink they are gorgeous.
These two slices didn't fit in the box when I came to box them up, so I used them straight away :-) 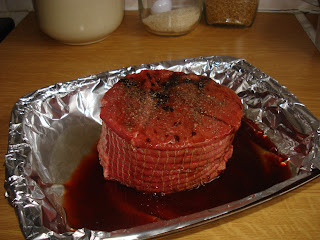 A joint of beef that was in the fridge, has been cooked, half of it was used for one evening meal for Lovely Hubby and more slices from that half were taken cold with salad to work the next day, all the trimmings were given to the dogs for their tea that night. 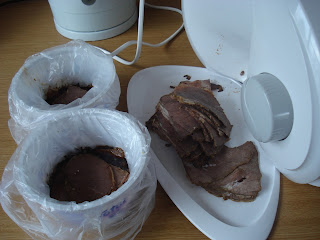 After chilling the other half overnight in the fridge to make for easier for slicing, it was thinly sliced and about two thirds of it put into tubs with gravy. 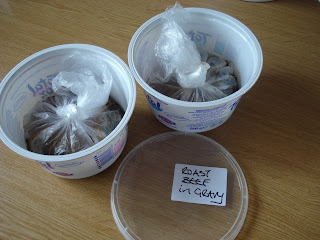 Once frozen the bags were tied up and both popped into one tub and clearly labelled, they too are now in the freezer, the basis for two more meals.  The other third of the thinly sliced meat was again taken with salad for lunch for LH
So one small joint of beef has made the basis for five meals for LH and one extremely tasty tea for the dogs.
So now added to the freezer are -
Two boxes sliced carrots
One box of sliced oranges
One tub of sliced Roast beef in gravy.

No wonder it's looking so full even after a good sort out and stocktake.  I have now written down everything that is in there (almost getting frostbite in the process) and I'm going to do another inventory so I can see how long this should last us and make the best possible use of what we have.
I'm trying my best NOT to spend ANY money on food this week AT ALL.
Pictures of the rapidly emptying fridge will be put up tomorrow.
Sue xx

Labels: Food, From Full to Empty, The £2 House Keeping Challenge