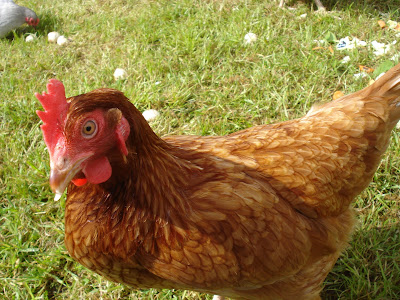 Yesterday I said a sad farewell to my Gorgeous Girl.
She was the last of our second batch of 20 rescued free rangers, a truly scrawny chicken who was given her name in the most ironic fashion, she was the scrawniest, scruffiest of the bunch when we picked them up from the farm that was going out of business.
Ironic then that she grew to be the most gorgeous girl in my eyes. 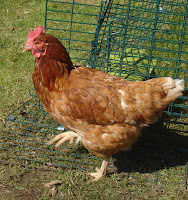 She strode around Chicken World forging friendships with so many of the other girls, never seeming to 'hang out' with any one chicken or group the most.  She melded herself into all our lives, both human and chicken.
For the last few weeks she has been going down that all too familiar path that chicken keepers and lovers will easily recognise, of keeping to herself that little bit more, relishing the little she ate and drank, making the most of any ray of sunshine that came her way and tucking herself up nice and early for a good long sleep every night. 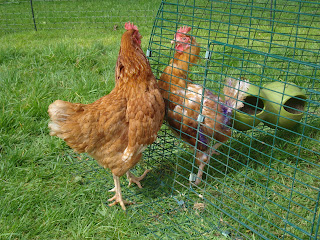 We thought we were right on the verge of losing her the other week she slept away most of the day and seemed lethargic and not herself.  Then I picked up our little rescue battery hen, and Gorgeous Girl seemed to recognise a kindred spirit, although one she most definitely wanted to dominate.
She rallied round magnificently, and yes they met without a fence in between them, as all the new girls have been running with the rest of the flock for over a week now.  They met, introduced themselves and decided that they could live together in harmony.  But there was no fight left in Gorgeous Girl anyway, she gradually started to wind down that clock of hers again.
Yesterday when I went over first thing, she had struggled to get out of the nesting box and had fallen.  When you see a chicken with her bum and leg in the air and face down you expect her to be dead, but when I picked her up she chirruped, that gentle sound that chickens do infrequently, mostly to their young, as if to say to me 'thank you for sparing my dignity'.  I cuddled her and set her down more comfortably in the nesting box, saying my goodbyes as I did.  I put the lid down and went about filling up the drinkers and feeders, and lo and behold five minutes later who should be slowly and very carefully walking her way down the ramp ...... my Gorgeous Girl.
She slowly walked over to the drinker where I was and sat herself down in the sunshine dipping her beak in the fresh cold water.  I got her a handful of corn and she tentatively pecked enjoying the tiniest meal of her life.  I left her there happy in the sunshine and went about my normal chores. 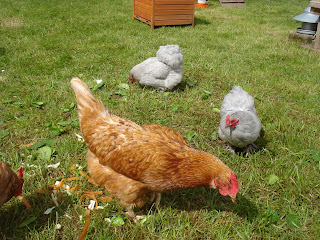 Gorgeous Girl with Poppy and Daisy
Why have I called this post 'Chicken Friendships', well for the last two weeks each night Gorgeous Girl has been sleeping in the nesting box and tucked up with her has been Poppy, one of our Lavender Pekin Bantams.  In the nesting box on the other side has been Daisy, Poppy's sister.  Normally all three of them would have slept on the roosting bars but with Gorgeous Girl obviously not too good on her feet when asleep it would appear her friends had decided to join her in the new sleeping arrangements.  I hadn't even realised they were friends!!
When I went back to the henhouse later yesterday morning, all three were sat in the nesting boxes, Daisy sat in her usual sleeping place but upright and alert, and Poppy cuddled up against the dead body of her friend.  I shooed Daisy out of the house and tried to do the same with Poppy, I don't like the other birds to see me removing their friends bodies, she was not for moving.   So I carefully lifted out the body of my Gorgeous Girl and instantly Poppy gave forth a sound I have never heard from a chicken before, a shriek of absolute heartfelt anguish, it breaks my heart just typing those words, almost as much as it had broken the heart of Poppy losing her friend.
Whether you are chicken or human to have known that bond, that link, that love is an amazing thing.
It's so nice to be reminded of the power of love, and the effect it and we can have on another when we take the time to share it.
Poppy and Daisy were on the roosting bars again last night tucked up with Newbie, our other Lavender Pekin and are now back running with their other friends and enjoying the sunshine this morning, but no doubt deep in their chickeny hearts and minds a little bit of love remains for their friend. 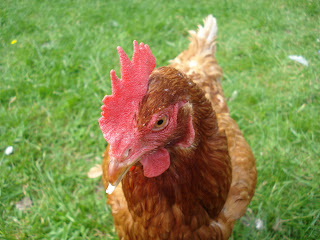