Food on Credit - My Story 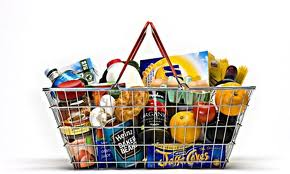 Yesterday breaking our journey for a coffee at the motorway services we watched on the huge tv screen this news report.
http://uk.finance.yahoo.com/news/struggling-families-using-loans-buy-122016096.html
We watched with incredulity and sadness and then we started chatting about it.
I bet lots of these families buying their weekly shopping on the credit card or on borrowed money are doing so with a home stuffed full to the brim with modern technology.  I bet their kids have their own flat screen televisions, I bet they and their children all have mobile phones that are either on contracts or topped up on a regular basis.  I bet there are games consoles lying around the home unused and unplayed with as the next 'latest thing' has come along.  I wouldn't be surprised to see stacks of Dvds, watched once and then left either lying around gathering dust or on placed shelves never to be watched again.
All this and possibly more languishing at home and they are out flexing the plastic to buy food.  Whether it be ready meals, as they have never really got into cooking or haven't been taught how to prepare from scratch, or food that they make from scratch because the ready meal budget went out of the window when the credit card was down to it's last few hundred pounds of available credit and panic set in.
Well sometimes you simply have to decide to call it a day.
Now this isn't the sort of Blog that tells you all about how to set your finances in order there are much better sites that can do that for you.  But this is my Blog.  The blog of someone who has been there and done that, wore the t shirt to prove it, until it fell to rags and there simply wasn't a penny left on the credit card to buy me a new one.
We ended up in this trap,  buying our weekly food on credit cards.   At first we had used them for furniture we thought we 'had to have' to keep our house looking nice like our friends and neighbours, then it was treats we 'thought we deserved' and then finally because of paying back all our available cash to meet the minimum payments on cards we ended up buying food to keep ourselves alive.  Bad decisions, we were young and this was what we thought everyone else was doing so we did too.
Then one day I woke up and smelt the roses, they were dead in the vase that was bought with the credit card and it's friends, that were put on the consolidation loan that we paid off regularly for a few months and improved our credit rating so well that we were offered another credit card, and then we began the cycle all over again only now we had a consolidation loan and the credit cards.
Those were the darkest and most dismal days of my life, I brought my boys up through all this and then we reached the end.  A marriage that fell apart, both left with debt, equal shares I was never one to shirk responsibility,  only I took my share and began the slow process of paying it all back.
And I did every single penny.
Nothing was replaced that wasn't absolutely vital, everything that was unneeded (and in some cases still being paid for on those blasted credit cards and loans) was sold,  the bills were put in order of priority, the first and most important one being to keep a roof over mine and my sons heads, rent, council tax, electricity etc.  Money over after allowing for the direct debits was budgeted to within a penny.  Enough food to keep us alive, we did without 'treats' for a while unless yellow stickered treats fell into our laps or family gave us hampers of goodies or gifts at Christmas and birthdays.
Bit by bit, penny by penny, pound by pound the debts went down.  I snowballed payments from one debt onto others as they were payed off, until by the time I had met Lovely Hubby I was clear.  Clear of all debt and breathing freely again.  My previous marital home had been sold (I was bought out by my ex believe it or not who kept up with his life in debt),  and the cash I got payed off the final few debts and got me a deposit on a small house, paid for the work that needed doing to it and got me a second hand car.
This time I could really stop and smell the roses, bought on yellow stickered offer at the supermarket and placed in the 10p 'Next' vase bought from the car boot sale.  The food we ate from the charity shop plates was even more tasty for being cooked from scratch from end of day bargains,  my son waited until Christmas or his birthday to get a new game for his games console and then got super canny and used the brilliant 'trade in' scheme that the computer game shop used for games.  Trading in the ones he no longer played for the one his mates raved about and were the 'must' have games of the moment.
We had less - but we lived more.
We cooked together, we talked, we watched television in the same room, until Christmas and the need for way too much sport for his poor Mum to ever to be able to sit through, brought him his own television for his own room.
We managed and it was good.

So my advice, for what it's worth.  If you are one of these families struggling to pay for your food on credit, and I sincerely hope you are not, take the first steps to change things NOW.
Cut up the credit cards, if that is not possible or seems just too scary take an empty icecream tub fill it full of water and drop your credit cards in there.  Place the whole thing at the back of the freezer and forget about it for as long as you can.  If you have the urge to spend it on unnecessary things by the time your brick has thawed you might have lost some of that urge!!
Look around your home for things you don't use, don't need, don't like.  Sell them, at car boot sales, on Ebay, on Amazon, to your friends, to your family, at the end of your driveway but get rid of what you don't need.  Use that cash to live on for the next few weeks and make minimum payments on all of your debts but one, that one chuck every last penny at until it's gone.  (You can choose either the lowest amount first to give yourself a psycological boost, or do as I did and start on the one with the highest interest.)  Whichever way you do it once this first debt is paid off move onto the next one, paying it's minimum payment PLUS all the money that you had been paying off the first debt,every month until that one vanishes too,  keep going this way until you are free.
Freedom is wonderful - Freedom is priceless.
I hope this helps someone, somewhere.
*** *** *** 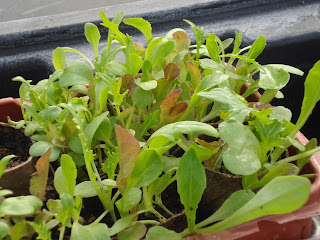 Now I'm off out to plant some lettuces, even at the supermaket you can't get 400 lettuces for 50p (the cost of my packet of seeds), but don't panic I'm only really planting about 30 of them :-)

If all 30 of them are ready at the same time I will sell half of them at a car boot sale and that will mean that once again my lettuces for this year will have made me a profit!!