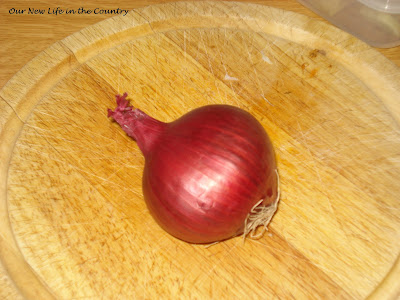 We're here, at the bottom of the onion bag .....it's the very last onion, poor lonely little thing.

You may remember I told you there were two left, well Lovely Hubby fried us some onion to have on a sausage butty on Saturday for our lunch and he went mad ...... and used a whole one!!  I'll have to teach this man of mine a lesson :-)  The sausage butty was absolutely delicious so I shouldn't be too hard on him. (I had Quorn sausages, just in case any of you thought I had started eating poor little piggies.)

So last night that left me with one onion, at first I was tempted to make some onion rings then I discovered a bag of them lurking in the depths of the chest freezer, so I changed tack and instead went for a Spanish Omelette. 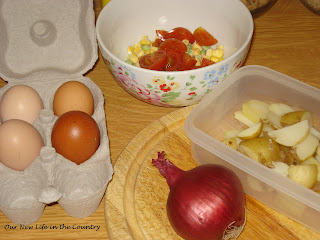 I was aided in this decision by the fact that I had a tub of leftover potatoes from the night before, I have a little challenge  going on in my head this week to save little amounts from the previous nights tea to inspire the next nights, no matter how small the amount.  I think I have been inspired by THIS blog, well worth a read, some wonderful concoctions. 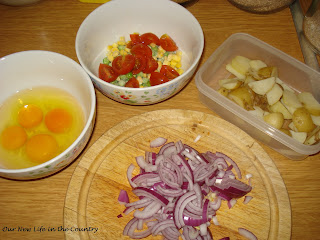 So the last onion was sliced up and added to four of our lovely eggs with some peas, sweetcorn, tomatoes and the potatoes.  It was a lovely tea, served with sausages for LH and just on it's own for me as I found it very filling.  There should of course be a picture but we ate it all before I remembered to take one!!

At the top of my shopping list now is one word ..... Onions. 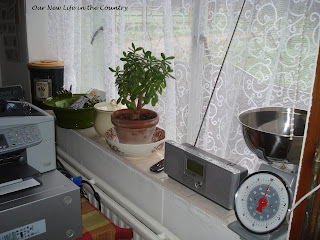 This Blog post encompasses two of my Challenges, at the top there is 'The £2 Shopping Challenge', making the food last as long as possible and the money too, and then now I am about to veer off into 'The Year of Less'.

I was going to start on the spare room this week, but I have been waylaid by surfaces.  After seeing the picture of mantlepiece in the 'Me and Green' post yesterday, I looked at things around the house with fresh eyes.  The kitchen windowsill had been bugging me for a while, it contained useful things but just a couple of things too many and it was starting to look cluttered.  So I decided to tackle that next instead. 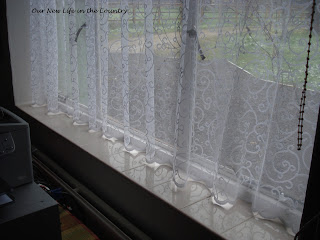 This is how I would love it to look, but I guess that is a bit unfeasible, at the moment anyway. 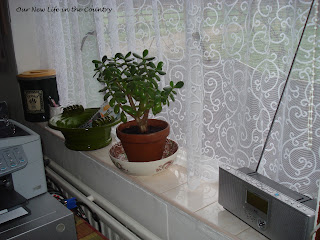 So everything was taken off, the windowsill cleaned and everything that was going back wiped down (and watered in the case of the plant).  It looks much better, and the things that are missing ..... 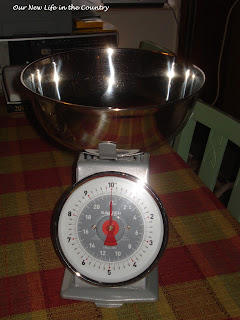 ... the scales will find a niche at the back of one of the kitchen cupboards, I don't use them that often, I like my little digital scales that I can zero and continue adding ingredients to the same bowl, but these ones go up to 10kg and sometimes they are really useful.  So they do earn their place in the house. 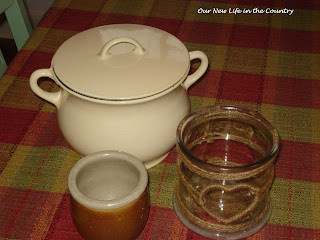 ... and these three things are going into the car boot box.  I like, no I love the cream cast iron casserole pot but I have only ever used it to cook in once.  It's an awkward shape and I have others that I love even more. Where were the other two items on the window sill I hear you ask, well .... they were hidden inside the casserole pot and have been there for months, serving no useful or even decorative purpose, so they are OUT ... even though I do secretly love them too!!

Since reading the book at the top of my sidebar 'The Joy of Less - A Minimalist Living Guide' I have been inspired to look at things differently.  It's really opened my eyes, in fact I recommend it so much that when I have finished reading it I am going to offer it on here as a giveaway, so watch out for it appearing in the near future.  The information has ingrained itself so deeply in my mind because I agree with it so much I don't need to keep the book.

I can see the car boot stall looking lovely this Spring, laid out with all the things that I love so much, but I must say I love the space they leave me when they go even more.

Off now to tackle another area.

Labels: Challenges, The £2 House Keeping Challenge, The Year of Less