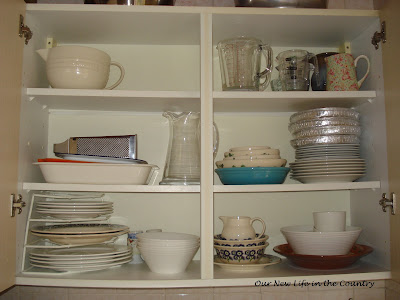 I've been busy in short spurts, in fact every time I notice something or somewhere that seems cluttered I spring into action.  It can make getting something out of the cupboard to use to prepare a meal a whole different task.  One minute I'm reaching in for a jug the next I have emptied the whole shelf or cupboard, wiped it all down and I'm considering what hasn't been used, for how long it hasn't been used, do I need it as a 'double up' for our new place or can I let it go with a light heart.  Then, and only then do I put everything back and get the thing I was reaching in for in the first place. 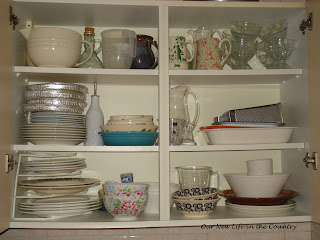 I find I am letting go of more and more things and questioning my somewhat controlling way of doing some things. For instance in the before picture here there are two Cath Kidston flowery bowls, four nice white ones and two Emma Bridgewater bowls on the bottom shelf, plus all the other pasta bowls etc on the middle shelf.  I asked myself why do I only have my Oatbran porridge out of flowery bowls or occasionally use them to beat eggs in, why don't I use the other bowls for that job as well.  There really was no answer, the stack of four white bowls are the newest and actually my favourites, the two EB bowls are part of a set we use regularly, so I decided therefore to let the Cath Kidston ones go.  Does it matter what bowl I have my porridge in!!
The glass dessert dishes on the top shelf were bought for a specific event and have never been used since, there are eight of them as I needed six and they came in packs of four!!  No question there then, why have those when I can just as easily use our nice drinking glasses for a posh dessert that needs a little glass 'dish' or use the white bowls for other larger puds.  We packed them up and moved with them and then they have taken that space up in the cupboard for a year......why? 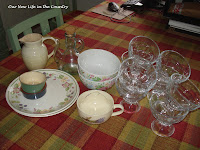 In the end out of that one cupboard these are what have been jettisoned.  Every item was thought about at the time and then put into the spare room for a week in case there was to be a change of heart.  There wasn't, so now they are priced up and in the Car Boot Sale box ready for Spring. Seventeen more items for my 365 List.
Doing this in little snippets or spurts gives me plenty of time to think about the things I am getting rid of this year.  Last year I swept through the house grabbing things that were obvious and just had to go, all these things were saved because we liked them, or we thought we used them, now I have had the time to really see if we actually do use them, merely liking them is not enough for me anymore. 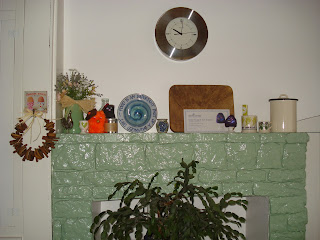 The mantlepiece was done as soon as the Valentines Day cards came down, completely emptied wiped down and then only the things that I wanted were put back. 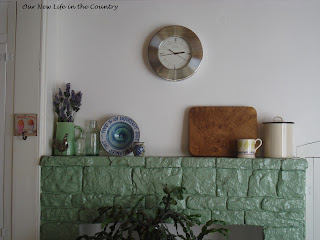 It's not that much different, but to my eyes it's a bit simpler and more spacious.  The only things to go into the car boot box are the Cinnamon and Orange wreath and the faded silk flowers from the jug.  The Dorset Cereals certificate I won for being 'Little Blog of the Month' is stuck in my diary for posterity and the egg cup that came with it was simply popped into the cream canister at the right hand side which is full of other egg cups.  The candle in the tin is being used in the living room to give the house a wonderful vanilla scent each day.  So much better to use than to display and dust!! 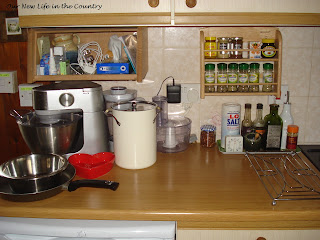 Yesterday I was just starting to prepare tea when this clutter hot spot caught my eye, luckily I had started nice and early so I had to time for yet another clutter-busting session.
Everything was taken off, this is the best way to do it as recommended by the book I finished last week, The Joy of Less, by Francine Jay (the link is still on my sidebar but I will be taking it off at the end of the week), the surface was wiped down and then only the things I wanted out were put back.. 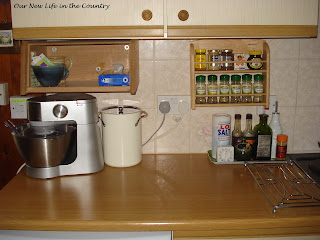 As I had earlier sorted out the pan cupboard (and jettisoned a deep fat fry and a large lidded frying pan) there was space for the liquidiser and food processor bits of the Kenwood mixer to be put in there freeing up much needed space on the worktop.  Other bits were put back into their rightful places and a bit of rubbish from the little bread bin thingy was thrown away.  Now all that's left on there is what is in almost daily use.  The canister holds two bags of flour, brown and white, and my tub of yeast for my twice weekly bread making sessions so it's handy having it next to the Kenwood as that's what I make it in :-)
I even found a new place to plug in the radio, it had the big black plug that you can see in the first picture, every time I needed to use the food mixer I had to unplug it which meant it lost all it's memory of channels and I had to play around with it once it was plugged back in to get them back.  Now the mixer can be left plugged in ready for action and the radio has it's own socket that it can stay in permanently.  Even little things like not having a trailing lead on the worktop make it easier on the eye (and safer too). 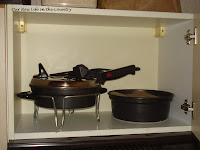 While I was at it I emptied the small cupboard above the cooker and decided to let go of a large decorative bowl that I love but that I have never used for anything, and in the space it vacated I can now store my Remoska, handy to use and stored together with all it's component parts just above the cooker, but not collecting dust and needing to be wiped down everyday as it was.
So over a few days a few spaces have been made in the kitchen.  There is still some more to do but for now I feel lighter of heart and the whole place looks easier on the eye.
Kitchen space, so much better than kitchen clutter.
Sue xx
Posted by Sue at 10:54

Labels: Car Boots, Clearing the clutter, The Year of Less