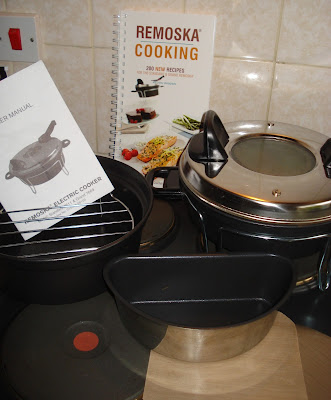 Well my Remoska is actually the Standard version, you can also get the Grand Remoska which is obviously larger and suitable for bigger families,  The Standard is suitable for 2 - 4 people and I think the Grand for 4 - 6 people.  There used to be a 'Baby Remoska' too but that is unavailable, shame I bet it was a little cutie!!

I bought mine from Lakeland just after Christmas when I had a money off voucher and decided to treat myself to something useful.  After three years with an Aga and the joy of permanently having a heat source I was determined not to go mad wasting electricity by the overuse of the electric oven in this new place. Since I mentioned it on a Blog post the other day I've had a few comments and emails asking me to explain what it is and how I use it.  Well if you pop over to Lakeland using the link in the first paragraph they will explain what it is better than me.  But I will tell you what I have used it for up to now.  Starting with last nights tea, which was a 'make it up as you go along' type of tea!! 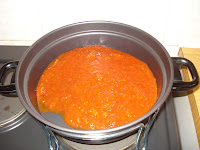 It was Veggie Sausage Casserole (of a ricey type). 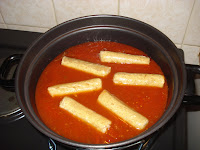 A jar of homemade Garlic and Tomato sauce was emptied in then 6 veggie sausages, two for me, four for Lovely Hubby (yes, he guessed they were veggie but ate them anyway). 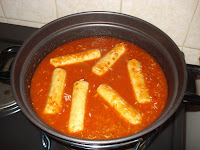 I added half a cup of rice... decided it looked too orange... 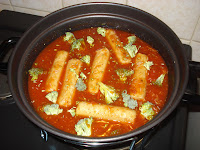 ...so I added some broccoli thatwas lurking in the bottom of the fridge. 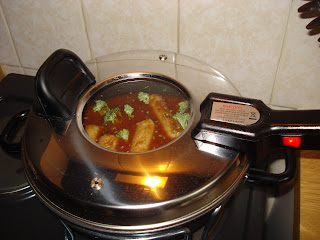 Then I popped the lid on and turned it on, this is the easy bit, there are no temperatures to choose from you just turn it on and you're off. 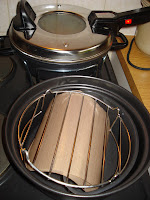 I packed away all the bits that I had got out to photograph to show you... 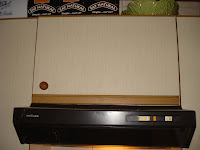 ... they live here directly over the cooker, handy and ready for use.  The main Remoska sits happily on the cooker top always ready for action and to remind me to actually use it when I'm planning a meal.

I didn't take a picture of the actual casserole when it was ready, LH came home from work late and it was slightly too cooked, but it was still tasty. I had added some frozen peas after the rest of the casserole was almost cooked and then dropped in some pre-cooked stuffing balls to warm up in the sauce for the last five minutes (or what I thought was the last five minutes!!). 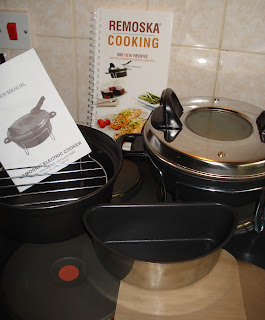 This is what I actually have -

So you can see it was quite a major investment for me, but it's one that should last me and providing I use it often will repay me quickly with saved electricity.  It simply plugs in to a normal socket and is portable and lightweight enough to use if you go on holiday, either in caravans or self catering cottages etc.  There is minimal washing up as the lid just needs a wipe once it has cooled down (that is where the heat source is) and the cooking pan can be popped in the sink with the rest of your pots.  I cut myself two bits of teflon cooking sheet to pop in the bottom when I am baking so I don't have to grease it.

I bought the Pan Separator so I could do both veggie and non-veggie dishes simultaneously, I usually put Lh's meaty bit in it and leave the veggie casserole or sauce underneath.

I have also used it to cook

I will keep on trying it out for other things and I may even use one of the recipes from the book when I get round to reading it!!  I think I will try a cake recipe next,  Frugal Queen had some brilliant ones on her Blog the other day, I'm very tempted.

(I must point out that this IS NOT a sponsored post or an advert for Lakeland or Remoska, merely in answer to lots of your questions, a pleasure to do, thanks for asking them.)