The Story of a Tunnel 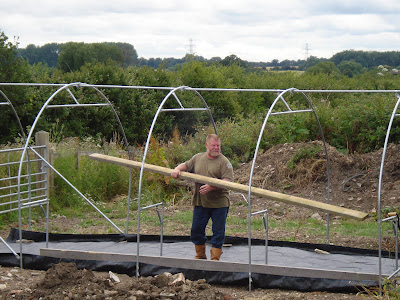 It all started back in June 2009, we started to erect the polytunnel bought from HERE, well I should say Lovely Hubby erected it...... over the course of a weekend all by himself, with just a smidgen of help from Jason and me when it came to pulling the HUGE sheet of polythene across.  Luckily we had chosen a wind free day and all went to plan. 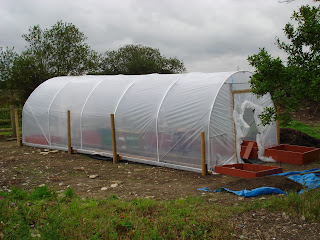 A week later Mum and Dad were on hand to help me build the raised beds and fill them with a mix of soil and compost, no mean feat it took us a couple of days and many, many wheel barrows full.  I snapped into action straight away, although it was relatively late in the season I still got all sorts of yummy food growing.  All our salad stuff was grown in the tunnel and a varied selection of veggies that I was keen to try out in its rampant heat.  There was lots of experimentation going on that year. 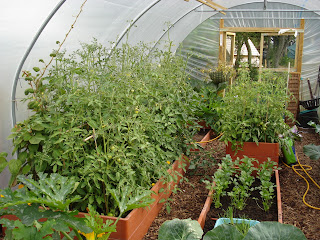 In it's second year 2010, I concentrated on tomatoes, courgettes and salad goodies, and started off all the seedlings for the outdoor raised beds, nothing failed.  I stopped popping two seeds in every hole in the seed trays, I got a 99.5% success rates with all my seeds so it saved time to just use one seed per hole.  I treated myself to a wind-up radio and spent so much time planting, weeding, watering and bopping away to music,  the polytunnel was the place to go. 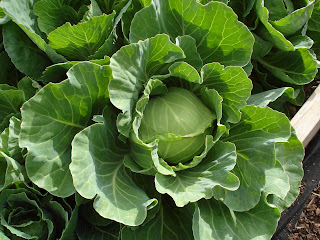 Last year 2011 I was in my element I had mastered most of what I needed to know, solved a few earlier problems, mostly to do with getting the ventilation just right, and got my early crops on the go right at the beginning of January with early cabbages and lots of seeds planted for crops to go into the beds, both inside the tunnel  and outside in the Kitchen Garden.  My cabbages grew enormous and loved the mild atmosphere in the tunnel, being so early in the year there were no moths laying on them and nothing to nibble at them, we ate the lot and that left room for all the seedling that were coming on. 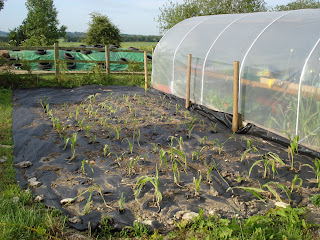 The side of the polytunnel has been used for many things too, the tunnel shelters the area from the westerly winds and catches and bounces back the morning sun, warming the ground and creating an ideal spot for our large Corn crop back in 2010 and then later the same year, just after the corn had been harvested ....... 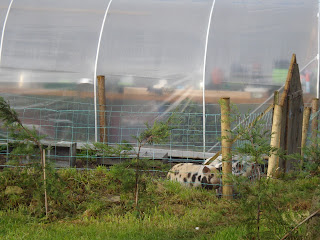 ... we put up a fence and the Kune Kune pigs moved into their new des res.  They loved that Mum was just on the other side of the polythene and would watch my progress and would follow me along as I weeded the left hand side of the tunnel, peering expectantly round as I popped out the back door of it with all the weeds and trimmings for their supper. 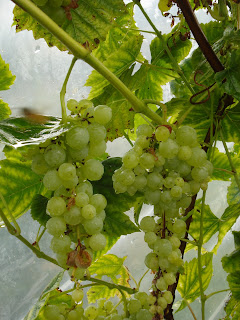 Last years success story was the Grape Vine, planted at the very beginning while the tunnel was being erected.  It needed its root system planted outside the tunnel to keep them cool and inside the the tunnel the branches grew and grew, for the first two years dying back to just a dead looking twig each Winter, then last year with a vengeance it produced grapes, bunches and bunches of the small juicy fruits, along every runner they dripped in perfect bunches, needing hardly any thinning or care, just being picked regularly, mostly by LH as he worked near the tunnel.  Why come into the house for a snack when you can munch on a carrot, wrap a spring onion in a mix of lettuce leaves, pop a tomato in your mouth and then finish the impromptu meal with half a bunch of juicy grapes. 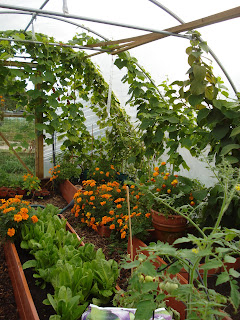 During 2011 I filled the tunnel with colour in the form of many types of Marigold, both decorative and edible.  These attracted the bees to pollinate all my plants and made my heart sing when I stepped into that mass of colour each day.  Dead heading them regularly meant they lasted right through the long growing season of the tunnel, only finally dying off with the drop in temperatures during November. 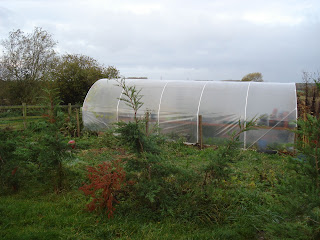 Due to circumstances way beyond our control the pigs all had to go during last year and the space by the side of the tunnel was left for nature to reclaim, now looking lush and green once again, this picture was taken in November.

We were eating from the tunnel right until the last moment, with radish, spring onion, celery and carrots all still growing away, surviving freezingly cold nights and giving us the taste of homegrown....... 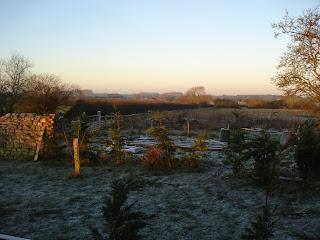 I was in Manchester at my Mum and Dads' house ,when I got a phone call from LH to say the winds had done their worst, somehow managing to rip through the polythene and sending half of it sky high, somehow he managed to rope it all down and I came home to find my tunnel in a state of bondage and devastation.  The last few plants had fallen victim to the ensuing frosts, although some of the herbs have been saved and are living in the shed by the window....a poor alternative to their previous home.  Luckily we had boxed up all the little bits, plant pots, seeds trays etc only the week before ready for the move, so they didn't all take off across the fields. 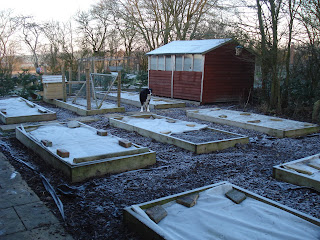 We spent this weekend dismantling the structure, well mostly LH again, using his skills of erecting it but in reverse.  I  used the damaged polythene to cover our raised beds to warm the soil for this years planting, although it won't be by me.   We will be in our new home in the next few weeks, planting in the greenhouse that comes with it, missing dreadfully the space and atmosphere of my polytunnel.

When we reach our forever home in the next few years, the carefully packed away struts and staging will be brought out, new polythene will be ordered and I will be back in action.  Once you've had that amount of indoor growing space you can't do without it for long.