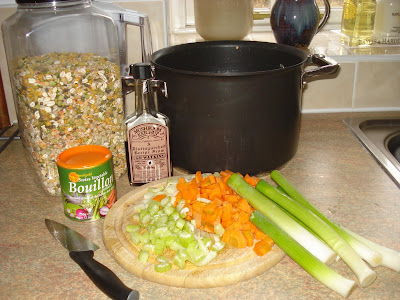 The other day I posted about spending the pennies, well it's no good just spending the pennies willy nilly, you have to also stretch them as far as you possibly can. With this in mind most weeks on a Monday I make a huge pan of vegetable soup, using a cupful of basic dried soup mix (lentils, split peas, little bits of pasta etc)  from my giant jar and usually whatever is lurking in the bottom of the fridge after the weekend.

Still available here at 99p for 4.
This week we had been given some lovely young leeks by our friend after Lovely Hubby delivered a trailer load of compost to her allotment, so I used half of these, thus saving me having to use one our last few homegrown onions.  I had the last three of our carrots grown in the tyres outside the back door and I added a single stick of celery from my slowly diminishing bunch in the fridge (it's four weeks old now and still going strong!) there is also the stem of a bunch of Broccoli that I used up last week in a pasta dish so that got chopped up and thrown in too.  I put plenty of water in to cover all the veggies, a couple of spoonfuls of veggie stock and lots of bits and pieces from the spice/herb rack, by not measuring things out too much the taste varies each time and we never get bored with it.
After bringing it to the boil on the top of the Aga it was popped into the slow oven to gently cook for a few hours.  We had a large bowlful each for tea on Monday with a freshly reheated baguette to dunk in and the rest was left to cool and popped into the fridge.  What's left gets used for lunches for LH to take to work or for me to have a bowlful at home.  None of it is wasted and sometimes halfway through the week I will add to it with vegetable water or more leftover veggies making it last even longer.
We only warm up the bit we are eating so as not to keep reheating the entire pan full each time, much healthier and it saves on electricity (I reheat in the microwave, usually in the bowl I will be eating out of to save on washing up), LH heats his up in his lidded plastic bowl that he takes to work each day.
At a guess the whole pan full costs less than a pound to make and it serves us about eight or so meals, so very penny stretching. 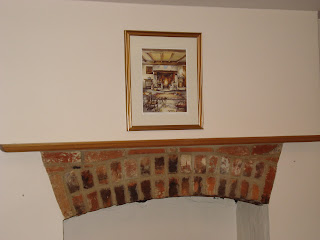 The packing is going well with areas suddenly appearing very bare all over the house.  All our pictures are remaining on the walls until we have decorated the new house and then we will literally take them down here and put them straight up there.  We are hoping to have the whole house set up and ready to live in before we move, I'll let you know how that works out!
Sue xx
Posted by Sue at 09:01