Spending the pennies is becoming a habit, instead of spending just notes and ending up with lots of change in my purse, just recently I thought I would see if paying for things with the right money instead of just handing over a card or a note would make me think more about exactly how much I was spending.  It does...... and it has the advantage of keeping my purse lighter and making my money last longer.
So I've turned into one of those annoying people that dig deep in their purse saying 'I know I've got the right change in here, won't be a minute'.  Mind you most small shops are pleased to get change, especially if you shop first thing in the morning.
My No Spend January has turned instead into a Low Spend January, I had 3 No Spend days in the first week, 5 in the second week and last week it was 4 No Spend days, so that's a total of 12 No Spend days out of 22, not that good.  So out of my housekeeping of £50 per week for the first 3 weeks of the year I have £34.96 over which makes my average spend each week around £35, I'm sure I can do better than that.  I must try harder!! 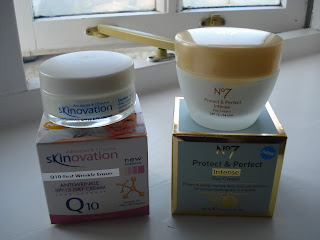 I've also been experimenting with cheaper toiletries and cosmetics,  I recently switched from 'Protect and Perfect' which costs £20.50 a pot to 'Skinovation' from Asda which costs £4.  It's just as good, smells just as nice and more importantly for me with my sensitive skin is just as kind to my skin. I have a couple of pots of this stashed in my wardrobe,  then I will have to find something similar in the smaller shops as I am still determined to keep up my Challenge and stay away from the supermarkets.  I may save the £9 that I have left on my Boots advantage card ready to buy a pot of something when these run out. 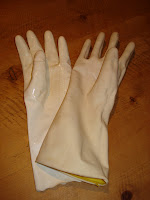 Other ways I've been saving money is by using up what I have.
As I'm right-handed I usually wear out the right hand of a pair of rubber gloves before the left one, so I save all the left ones, then when I wear out the last right hand one of my supply of new gloves, I start to use all the saved left ones, turning them into a right glove by simply turning them inside out.  They don't last as long but it's better than simply throwing them all away.   Once the left hand glove gives up the ghost as well, I use the wide part (from the base of the thumb to the wrist) to make some rubber bands or strips to tie plants to canes with, the rubber gives the plants a soft tie instead unyielding string which can dig into them as they grow.  So nothing wasted.
What have you been doing to save money recently?
Sue xx
Posted by Sue at 22:32