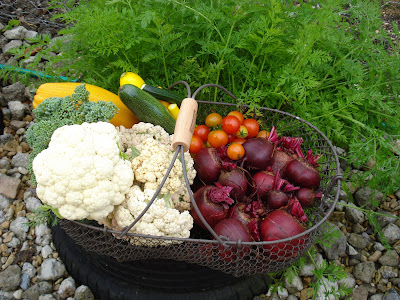 Yesterdays harvest waiting to be processed.
A while ago I was asked by a new to me, company called CSN to review a couple of their products. The choice of product was to be mine. Of course just as this lovely offer was made my salad spinner spun it’s last, so number one on my list would be a new posher, stronger, salad spinner. The offer came a day after I had been blanching cabbage for what seemed like an eternity, now picking out blanched cabbage with a slotted spoon for over an hour is not my idea of time well spent, so number two on the list would be a blanching basket.
~ 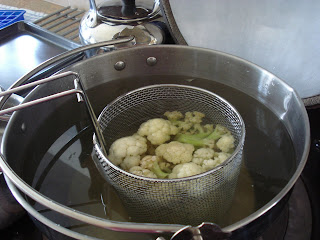 Cauliflowers in the blanching basket.
~ 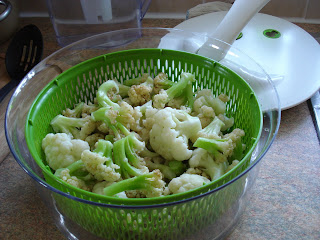 Transferred to the salad spinner to drain off excess water.
~ 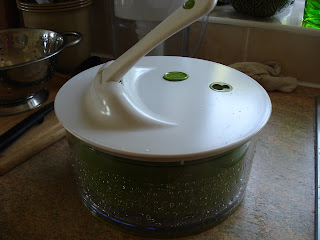 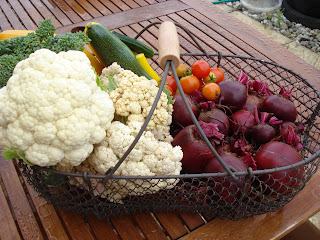 And for the third thing, I decided a thing of useful beauty would be my choice. I chose a magnificent trug like garden basket in which to gather my daily produce. I LOVE IT!!
~
It’s big, it’s handy, it’s comfortable to hold either in my free hand or in the crook of my elbow, and the bugs and caterpillars fall through the mesh, saving a few lives from drowning in salted water!
~
Yes, I know I’m a softy…I’m the girl who apologised to a caterpillar last week when it had been boiled with the cabbage. (Lobsters being thrown into boiling water are my idea of a horror movie, so to subject a poor innocent caterpillar to such a fate was unthinkable, even if it had been eating my cabbage!!)
~
Its other use was tested out on Sunday at the Farmers Market, I filled it with lavender and lavender bags and its rustic appearance added a certain something to a corner of my stall. Truly a thing of useful beauty.
~
I picture myself drifting in a very ladylike manner, wearing a Laura Ashley long skirt, snipping the flowers in my cottage garden, filling my wirework trug with blossoms and branches to artfully arrange in my suitably twee vase. Shakes her head and re-jigs the picture…….mucky jeans, muddy wellies and a trug full of cabbages….ahhhh…now that’s more like it!!
~ 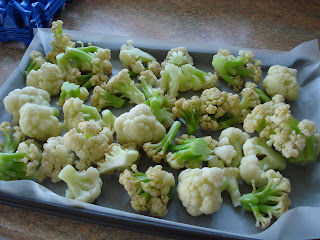 Cauliflower about to be open frozen.
~ 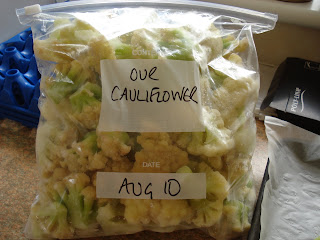 Bagged up after a couple of hours and returned to the freezer.
~ 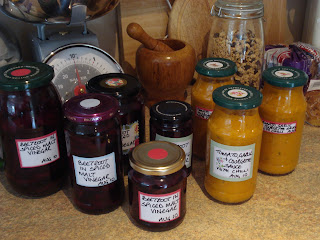 Jars of pickled Beetroot, and jars of Tomato, Garlic and Courgette Sauce with Chilli. All picked and processed within a couple of hours.....now there's fresh for you!
~
For lunch yesterday I had some of the sauce (well, I had half a jar left over) with brown rice......yummy. And then for tea we had the broccolli and some of the cauliflower in a cheese sauce with some breaded chicken.....equally yummy!
~ 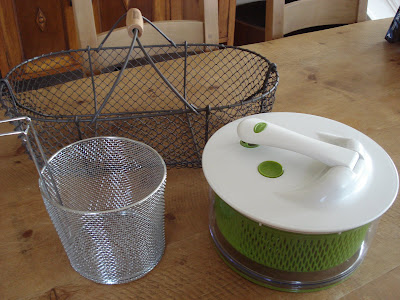 The three items that sped up the process and made things a little more fun rather than a tedious drawn out job. Highly recommended. I've highlighted the individual items with links if you would like to get them for yourselves. Be sure of one thing, I wouldn't recommend something that did not fulfill it's purpose and look the part in my kitchen.
~
Today I'm harvesting the last of the Spinach and getting that into the freezer. I'm starting to feel like a squirrel!!
~
Sue xx
Posted by Sue at 07:52